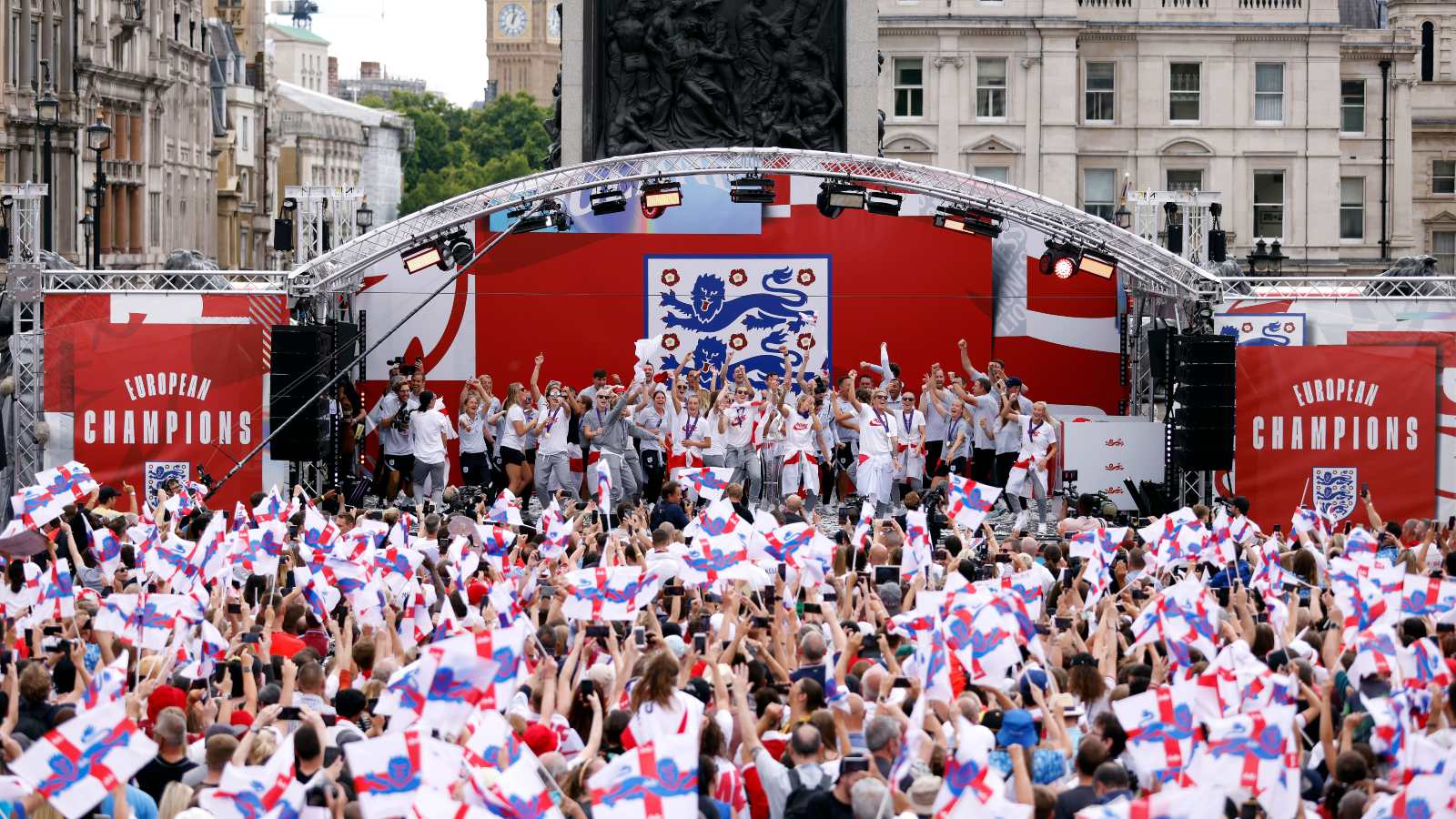 England players celebrated their Euro 2022 success in front of a packed Trafalgar Square on Monday.

Sarina Wiegman’s side beat Germany 2-1 after extra-time at a sold-out Wembley on Sunday to win the first major trophy in their history and the first for a senior England side since the 1966 World Cup.

Celebrations had gone on throughout the night and continued the next day with a special event in central London in front of thousands of fans.

Former England international and BBC pundit Alex Scott introduced the players on to the stage shortly after 12.30pm and started a rendition of ‘Football’s coming home’.

Fans who could not get into Trafalgar Square gathered on the steps of the National Gallery just to get a vantage point.

Manager Wiegman, captain Leah Williamson and goalscorers Ella Toone and Chloe Kelly led the squad on to the stage to raucous cheers.

Asked how she was feeling, Wiegman deadpanned: “Pretty good. Nice that you’re all here, thank you for coming,” while Williamson said: “I think we’ve partied more than we’ve played football in the last 24 hours!”

Williamson said she hoped the tournament could lead to lasting change for the game across the world.

“I think the legacy of the tournament was already made before that final game, the young girls and the women who can look up and aspire to be us,” she said.

“We’ve changed the game, hopefully in this country and across the world.”

England men’s captain Harry Kane had tweeted to Toone on Sunday: “Take a bow for that finish”.

Asked about that onstage, Toone joked: “Yeah, I taught him that.”

Kelly, referencing her ecstatic celebrations after her winning goal, said: “The shirt’s staying on!”

Lucy Bronze also got the crowd cheering as she said the aim was now to win the World Cup, while Jill Scott said her hopes were that women’s football would now be known as ‘football’ following the success.

Confetti cannons and giant sparklers greeted England once again lifting the trophy, with Wiegman then encouraged to lift it by herself to more acclaim.

The squad sang ‘Sweet Caroline’ and ‘Freed From Desire’ – repackaged as “Beth Mead’s on fire” – before before Rachel Daly grabbed the mic to lead a chorus of ‘River Deep, Mountain High’.