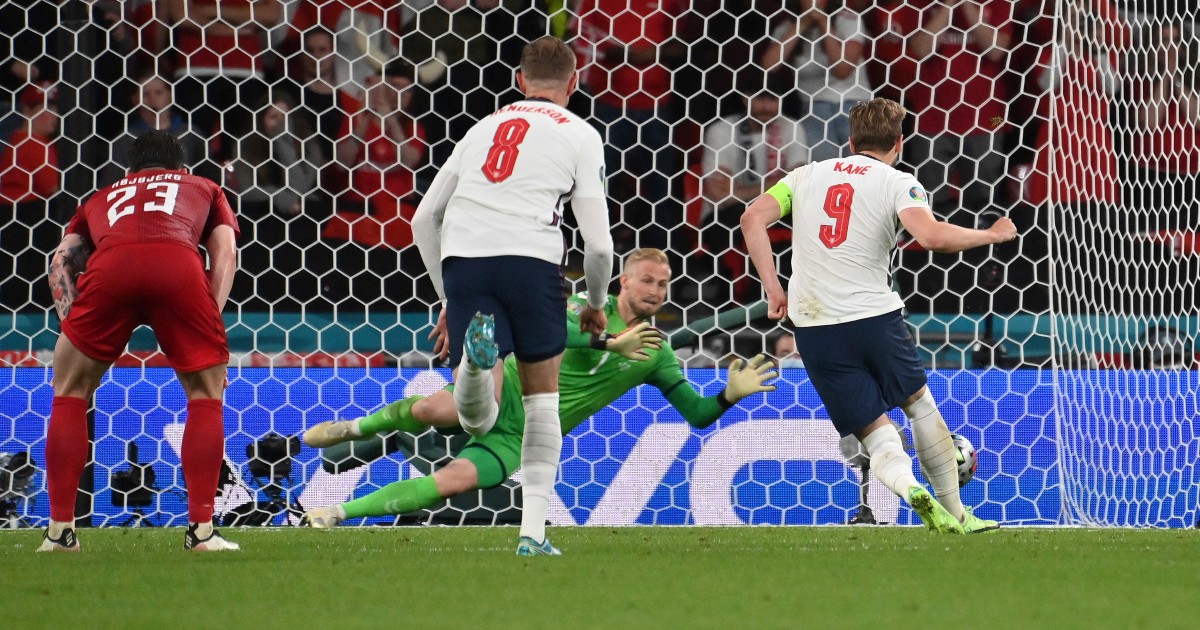 UEFA has charged England after a laser pointer was aimed at Denmark’s Kasper Schmeichel in the Three Lions’ Euro 2020 semi-final win.

The goalkeeper had a laser shone in his face before he saved Harry Kane’s extra-time penalty, although Kane scored the rebound to earn England a 2-1 victory on Wednesday.

England have also been charged with “disturbance caused by its supporters during the national anthem” after home fans booed the Denmark national anthem and the lighting of fireworks inside Wembley.

The case will be dealt with by the UEFA Control, Ethics and Disciplinary Body.

England came from behind after Mikkel Damsgaard’s free kick gave Denmark the lead.

Simon Kjaer’s own goal levelled for Gareth Southgate’s side and Kane booked England’s first major tournament final for 55 years when he followed up his missed penalty after Raheem Sterling was tripped by Joakim Maehle.

The Three Lions now play Italy at Wembley on Sunday aiming to win their first major trophy since lifting the World Cup in 1966.

The news comes amid a petition to get the game replayed.

The England penalty, which was deemed ‘soft’ by the Italian media and many others, has led one particularly salty individual to set up a petition to UEFA with change.org to try and get the match replayed.

The ‘Rematch England vs Denmark’ petition started by Cris Pinto reads: ‘We wish to overule the penalty decision against Denmark. It was a wrong call, there needs to be contact for a penalty and there was absolutely no contact. If this is not overuled, it would show a failure by UEFA and the beautiful game of football.’

Peter Schmeichel was also angry over the call which cost Denmark.

“He made a really big mistake on the penalty and this will be debated for a long, long time. It’s a hard one to take because it’s not a penalty,” he said.

“I would have been much more relaxed and acceptable if they had scored one of the many chances that they created, but unfortunately, the referee made a big mistake in my opinion.

“I know in your opinion and everyone’s opinion – my phone has not stopped going off – everyone else is saying it’s not a penalty so I’m quite sure that I’m right.

“We are very proud of the Danish team. We think the Danish team has done fantastically well. We leave the tournament with honour and England go on to play Italy in the final.

“They have had a really good tournament. It’s the first time, today, they have played against very, very top, tough opposition and in the end they came good.”