Home Johnny Nic Should we try to ‘get’ England tw*ts or just batter them? 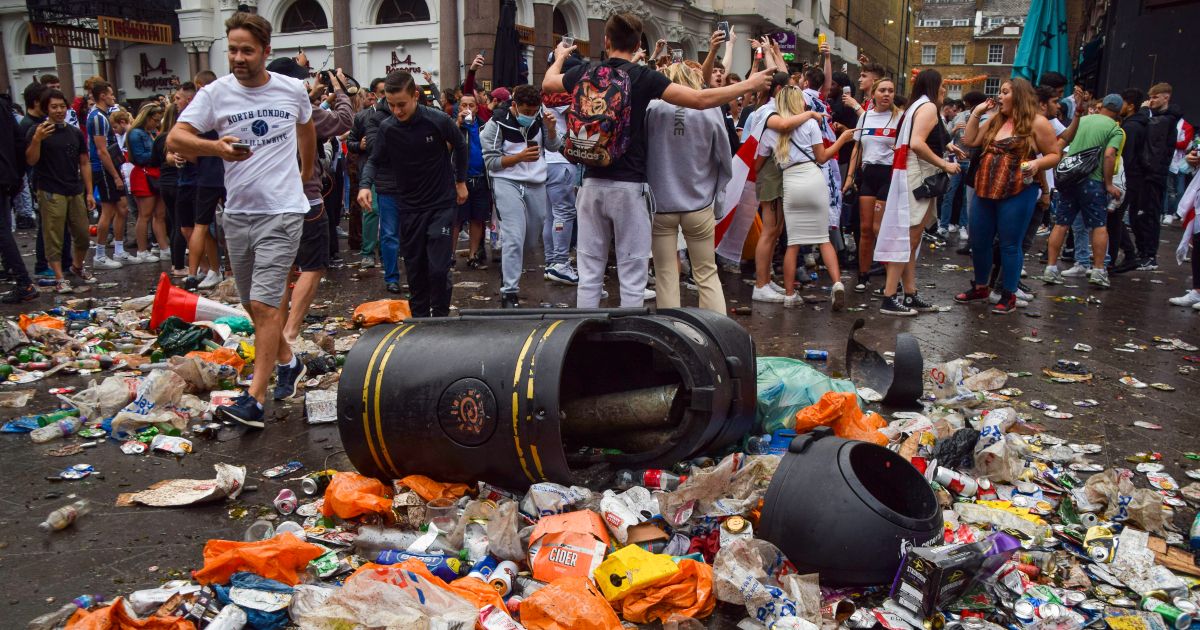 * Booing our own players.

* Terrorising Danish kids and their parents.

* Setting off flares and fireworks.

* Tearing up Leicester Square and leaving it in a disgraceful state.

* Climbing on cars and buses.

* Bribing stewards to get into Wembley without a ticket

* Violence against pretty much anyone, including stewards, police and security workers.

* Terrifying the kids and parents of other England fans.

* Making some with tickets leave, fearing their own safety

* Organising a Wembley ’jib’ with as many as 5,000 getting in without a ticket.

Have I missed anything? Probably.

Easy words to write, but each made many others’ day anything from unpleasant to upsetting and frightening. This on a day that should have been a celebration.

If you were UEFA or FIFA, would you let England host any tournament ever again? Of course not. While riotous behaviour doubtless happens in all countries (often caused by the English abroad) the sheer scale and intensity of it in England is bewildering.

What the f*** is wrong with these people? Have you noticed that they all seem to wear the same sort of shorts as part of their twat uniform. It must be that.

As someone rightly said, ‘twats are going to be twats’, but that doesn’t really explain it. Why do we have so many male twats? We can speculate it is part of a crisis of masculinity, we can blame it on widespread use of cocaine and the heavy drinking it facilitates, we can assign blame to the government, the police, Cressida Dick, Wembley, the FA and anybody else that comes to mind. But none of these things makes the vast majority of people behave anything like this, so why does it make these thousands do so?

When watching the footage it looks like a herd of lunatics. People who have lost control of their mind, stop caring about anyone or anything, even themselves. They have no self-respect, no thought for anyone else. In other words: mad. Insane.

Can you imagine doing any of this? What must it take to get into this mindset? I mean, I, like many people, don’t even like talking above a whisper on a train for fear of disturbing someone else. The distance between that and sticking a firework up your arse is unfathomable.

Never having met or knowing anyone who behaves like this, I don’t know what they’re like in their everyday life, but they can’t live like this can they? This must be a temporary insanity from which they go home to a relatively normal life, their riotous rage pushed onto the back burner until the next time.

As with so many issues, we can deal with the symptoms of their madness by heavy policing and by cracking heads. But really, it is their underlying culture that needs fixing. And that is incredibly, if not impossibly complex, covering every base, ranging from economics, to politics, to upbringing, gender and the million other things that govern our behaviour and frame of mind.

Have we got a chance of unpacking all those issues that drive all those people’s behaviour? Should we even bother to try? I can’t be the only one to have a sort of compassion fatigue, to be tired of trying to understand their behaviour and now just want to see them get absolutely battered by the police, the army and any other force of the state we’ve got available. Then put in jail for a long time because twats are going to be twats and maybe that’s the only lesson to learn.