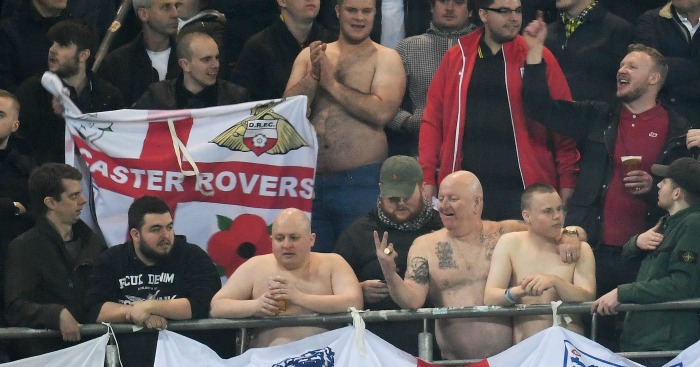 England fans have been urged to cut out the “tedious, prehistoric chanting” ahead of the World Cup qualifier in Scotland by the Football Supporters Federation.

The Football Association is attempting to clamp down on boorish behaviour, with lifetime bans from the England Supporters Travel Club dished out for the first time after two individuals were caught making Nazi gestures in March’s 1-0 friendly loss in Germany, with 27 suspended in total and six given written warnings alongside one pending case.

The conduct of spectators will again be under close scrutiny when England travel to Glasgow to face rivals Scotland this weekend, with the FA understood to be wary of potential punishment from FIFA if supporters chant about anything deemed to be political.

England have an allocation of 4,761 for Saturday’s match at Hampden Park, and the FSF has pleaded with supporters to behave themselves.

“English football fans have a great reputation around the world for the numbers in which we travel, the passion we demonstrate in supporting our team, and our ability to party enthusiastically well into the night,” the organisation said in an editorial in its England fanzine, Free Lions.

“We have made friends in country after country, and when you start to hear the fans of other nations adopting and adapting our songs, you can be sure we’ve made a lasting impression. We have a lot to be proud of.

“We are at our best though when our songs are imaginative and witty, and particularly when they’re related to the football and provide real motivation and encouragement to the team on the pitch.

“And that’s why we are firmly of the opinion that we’d be much better off without some of the lame and boring songs about World War Two or the IRA.

“They’ve got nothing to do with football, and they do nothing to get behind the team; surely the best contribution we can make as fans is to support the eleven on the pitch wearing the shirt, regardless of whether or not we agree with the team selection, the formation or the tactics?

“Songs about German bombers are out of date, out of touch, and make us look and sound ridiculous.

“It’s over 75 years since the Battle of Britain. The Northern Ireland ceasefire dates back to 1994, and the idea that we need to proclaim our refusal to surrender to a banned terrorist organisation that gave up fighting 23 years ago is frankly tragic.

“We are so much better than that, or at least we should be. Songs like that aren’t going to do anything positive, neither to motivate the team nor to win us friends on our travels.

“Other than chanting which is racist or discriminatory and therefore illegal, we’re generally believers in freedom of speech, and we don’t want to see people getting banned.

“But we would really welcome dumping the tedious, prehistoric chanting and replacing it with something inspiring, relevant and football-related instead.”

The FA is introducing new measures in a bid to curb anti-social behaviour.

Stewards that are used to working with England fans at Wembley are to start working at away games. Two are initially planned to be on duty in Scotland, with a view to building and developing a team of six.

Supporters have been warned about their behaviour ahead of the match, where Scottish police will strictly impose a ban on drinking in open spaces. Concerns have been raised over the 5pm kick-off, while the Scottish Football Association has announced a “wide range of measures will be implemented as part of an enhanced security operation” following the recent terrorism atrocities.