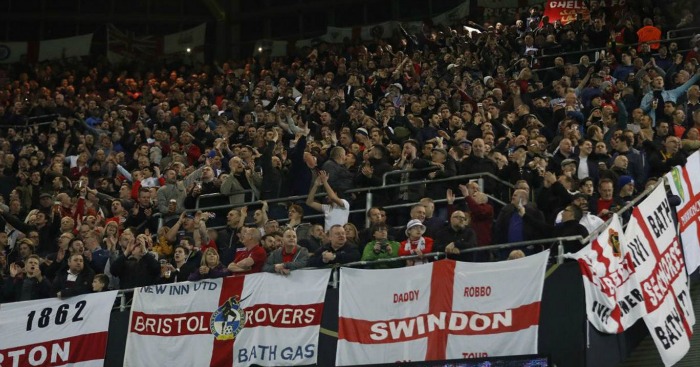 I get the defence, by the way, because it is both well-used and drearily predictable. They were in Germany, they had drunk plenty of beer, Deutschlandlied came on the tannoy and it sparked the kind of patriotic vigour that we all possess. It was good, old-fashioned banter, you see. Classic Second World War banter.

It is true that those singing chants about ‘ten German bombers’ have no idea of its context or their laughably misplaced taunting. Nobody is more happy that the Third Reich did not win the Second World War than reasonable Germans, and nobody wants those chants sung less than the English veterans who fought in that war. To paraphrase a well-worn line, they fought for your freedom, not for a licence for you to act like a d*ckhead.

Therefore it isn’t ‘just banter’, is it? And it never really has been. Using that defence is like the apocryphal tale of the man entering hospital with a tomato ketchup bottle stuck up his arse, in which the simple explanation contains enough flaws to make it nonsensical.

The chants are bad enough, poking fun at a set of supporters over the result of wars that ended 72 and 99 years ago, but it is the general attitude of those present that is most galling. Holding out their arms to represent the Battle of Britain planes during the playing of the German national anthem isn’t ‘banter’, just nationalistic aggression. On yesterday of all days, was it not worth at least trying to be pleasant?

On Tuesday evening, after I had mentioned the chanting in a post-match piece, a Nigerian living in Dortmund contacted me. He got on the U-Bahn at Stadtgarten on Tuesday afternoon, to be confronted by a throng of drunk England supporters. Those fans, noticing their new companion was black, chanted loudly at him that ‘Tony Yeboah has got on the train’. At best we’ll cause it casual racism. At best.

It continued until they departed the train at Theodor Fliedner Heim station, and the man continued his journey. He said the entire incident made him feel incredibly uncomfortable, but he didn’t challenge those fans because they were drunk and came across as belligerent.

Sure it's just a coincidence that the England fans were doing the actions to the 10 German bombers song during the German national anthem. pic.twitter.com/uiYHBzwDD1

An England fan in the stadium also told me about supporters who offered Nazi salutes over the barrier to home fans, and then physically attacked an England supporter who tried to explain why what they were doing might be wholly inappropriate and offensive.

These are just two incidents, but there will be others. To focus solely on the chanting is to overlook that this is only the idiocy that gets captured by television cameras and microphones in the stadium.

I understand the two immediate responses to a piece like this. The first says that these chants have always been sung, and therefore this is nothing new. That’s true, of course, but hardly a reason to ignore them. I went to two major tournaments between 2002 and 2014, and saw nothing like the scenes of last night and during Euro 2016. Things are getting worse, not better.

The second retort is that getting angry about the abhorrent behaviour of a minority is an exercise in futility. Yet I heard from many England supporters on Tuesday evening who told me that they would no longer consider taking their children to England away games, and would seriously consider never introducing them to our national team. Others said that incidents like this were why they no longer attended any England games. The actions may be carried out by the few, but they affect the many.

They also shape how English football fans are seen abroad, which is a warped, tainted view of our English football culture. No other support spends the majority of its matches aiming insults at opposing fans rather than celebrating their own players. Wales fans do not chant about bombers and wars, but Bale and Williams. They have the wherewithal to understand that getting behind the team makes far more sense than getting behind the country.

“I didn’t hear what was said but it has been mentioned to me,” Gareth Southgate said after the game. “Obviously our travelling support in terms of number and the way they back the team is brilliant. But we would encourage them to do that in the right way at all times.”

You can understand Southgate’s reticence to condemn, but his bosses should. Plenty of England away supporters manage to attend matches without causing trouble or offence, but they are being drowned out by those that do. Most importantly, it is dissuading many from doing something they love.

‘Don’t be a d*ck’ is advice that shouldn’t need to be given, but rarely has it been more necessary. Unfortunately, most of the d*cks care as much about what you or I think than about the actual football.