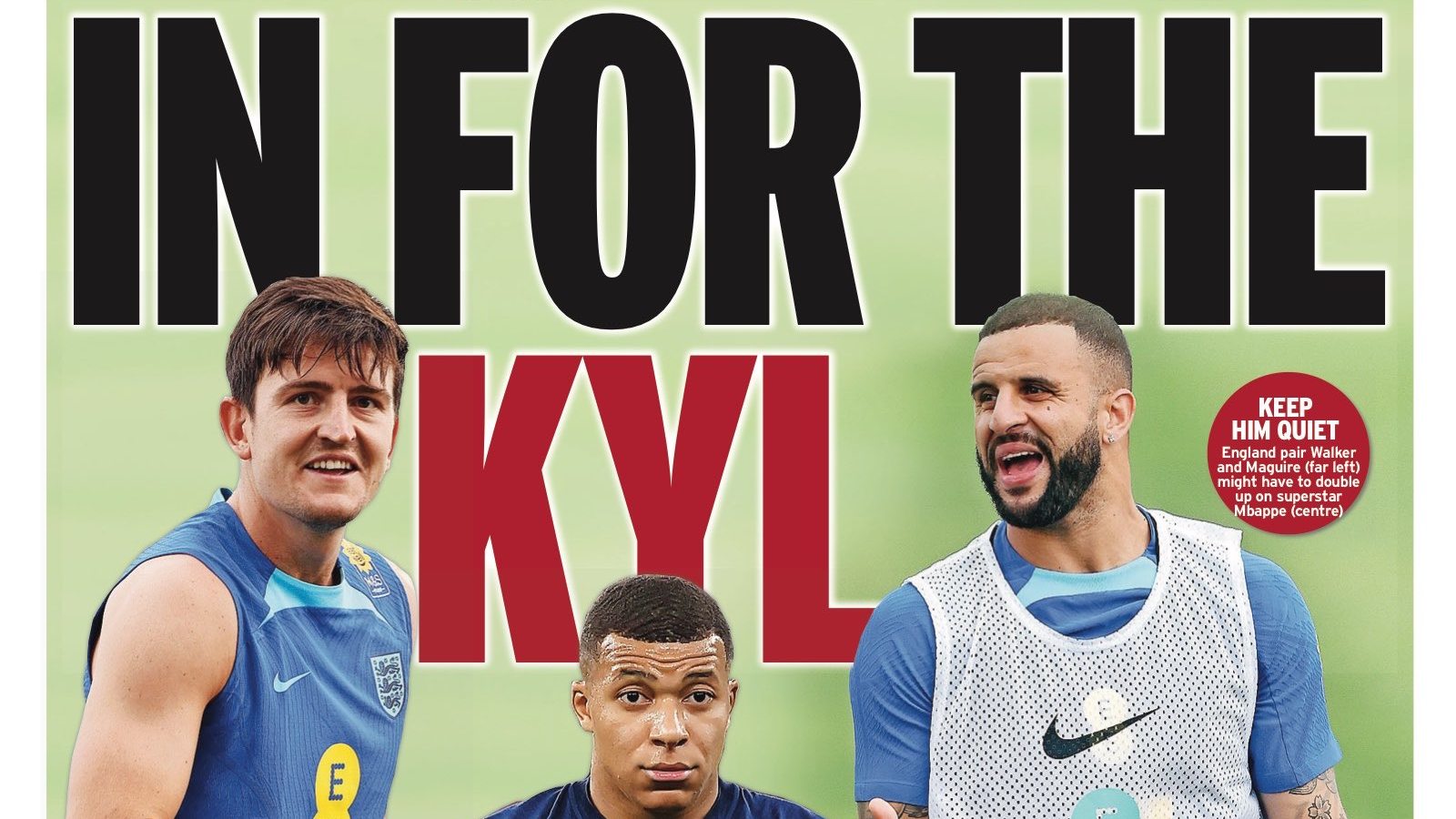 As England v France edges closer, should somebody let the English tabloids know that France have more than Kylian Mbappe?

There’s only two Kylian Mbappes
There’s only one place to start this bitterly f***ing cold Thursday morning and that’s with this comic:

As we wrote yesterday, the tabloids really do lose their collective sh*t when England go deep into a major tournament.

And after pretending that putting an England scarf on a waxwork of Kylian Mbappe was an exclusive worthy of a front-page story, Thursday’s ‘exclusive’ ‘news’ is that there is a boy also called Kylian Mbappe who lives in England and he is an England fan.

After Robert Pattinson (not that one) won Scoop of the Year in the British Journalism Awards of 2021 with the video of an amorous Matt Hancock, we fully expect him to claim another gong for this belter:

‘ENGLAND were last night tipped to beat France by Kylian Mbappe – a teenage student from Leicester.’

Sod the cost-of-living crisis. Sod the strikes. Sod the absolute sh*t-show that is the NHS. This is the biggest news in England.

“I’d pick a sausage roll over a croque monsieur any day.”

And for that imaginary moment, Pattinson truly does deserve to retain that trophy.

We are genuinely giddy to discover what is exclusively coming on Friday. That England fan who looks like Steve McClaren exclusively posing with a brolly? Hanson exclusively pledging to change the lyrics of 90s seminal classic MMMBop to MMMSaka if England win?

At this point, Mbappesolutely nothing would surprise us. Except perhaps The Sun realising that France have more than one player.

He sings the songs that remind him of the good times
Almost as bad as the front-page nonsense is the back-page tub-thumping. Why do we always have to pretend that players have definitely said England will win the World Cup? Do people really want to read that?

UNSHAKEABLE BELIEF? Where the actual f*** has that come from? Certainly not from Harry Maguire. And no, he did not say England had any kind of belief that ‘we’ll win the World Cup’.

He basically said that the players believe it is ‘possible’. To which we answer: Of course they f***ing do. England have reached two major semi-finals in the last five years. They are ranked fifth in the world and Belgium are already out. They are literally the fourth favourites to win the World Cup. If they were saying it wasn’t ‘possible’ now that would be a story.

He also said he had received texts from Manchester United congratulating him on his performances and victories, which Mediawatch imagines would be pretty standard fare from clubs with players at a major tournament.

“While I am away, they want me to focus fully on England.

“But I have had a couple of nice texts from them saying how well I’ve performed and congratulations on reaching the quarter-finals. It’s nice.

“I am sure they’ll be watching the games but Erik will be supporting the Oranje army. It is good to feel the support of them.”

And no, Charlie Wyett, it’s not ‘ironic’ that the club are texting their captain; even Alanis Morissette has a better grasp of the concept.

OK Supercomputer
You know what’s been missing from this World Cup? A supercomputer, that’s what.

Well rejoice because here’s The Sun. You can always count on them…

‘World Cup Supercomputer predicts rest of tournament ahead of quarter-finals… but will England or France get through?’

We’re going to guess at France because they are the favourites and there’s nothing a ‘supercomputer’ (is the World Cup supercomputer different from the Premier League supercomputer? Is it just a different app?) likes more than a list of odds.

‘A WORLD CUP supercomputer has predicted the rest of the tournament as the quarter-finals loom.

‘And England are sadly tipped to EXIT the tournament when they play France on Saturday.’

Oh that is sad. Just as we were joining Harry Maguire in starting to believe.

You will be astonished to learn that the supercomputer uses all its operating power to calculate that Portugal will edge past Morocco, Argentina will triumph over the Netherlands and Brazil will beat Croatia. We will save you all the painstaking calculations but the supercomputer eventually computes that World Cup favourites Brazil will win the World Cup.