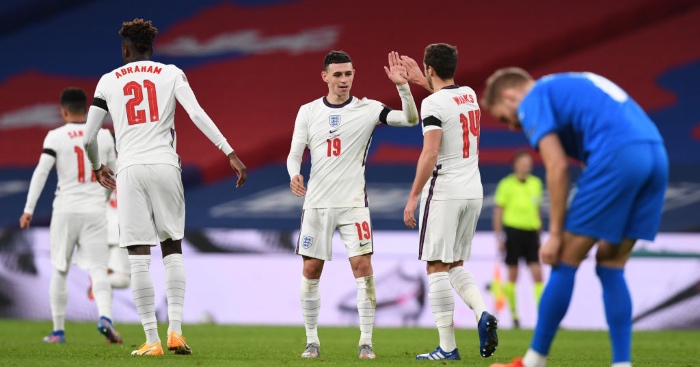 Phil Foden netted twice as England’s new generation staked their claim for a place at next summer’s European Championship and brought a challenging year to a convincing end against Iceland.

From Harry Maguire’s court case to the high-profile breach by Mason Greenwood and Foden, and his own bout of Covid-19, this has been a tough autumn for boss Gareth Southgate.

But a strange, testing year came to a comfortable conclusion at Wembley. Foden netted twice in the second half after goals from Declan Rice and Mason Mount, sealing a 4-0 win.

Southgate kept to his pre-match pledge to name a strong side for the final match of 2020.

That was despite Sunday’s loss in Belgium which left the Three Lions in Group A2 of the Nations League.

Southgate had to juggle player protection and club pressure in his lineup. His team against Iceland included four players aged 21 or younger in a competitive match for the first time since 1959.

Foden – making his first start since the Iceland incident that saw him sent home in September – was among that quartet and sent a free-kick over for another of those youngsters to score his first Three Lions goal as Rice glanced home.

The others were soon involved as Iceland failed to deal with a Bukayo Saka cross and Mount smartly struck home during a one-sided first half in which England got away 10 shots and Jack Grealish again impressed.

Birkir Saevarsson was sent off for a second bookable offence as matters worsened early in the second half for Iceland, who could have been playing this Group A2 finale in Albania or Germany was it not for a UK government exemption.

England remained on top with their man advantage and Foden came to the fore late on, swiftly following up his first international goal with a laser from distance.