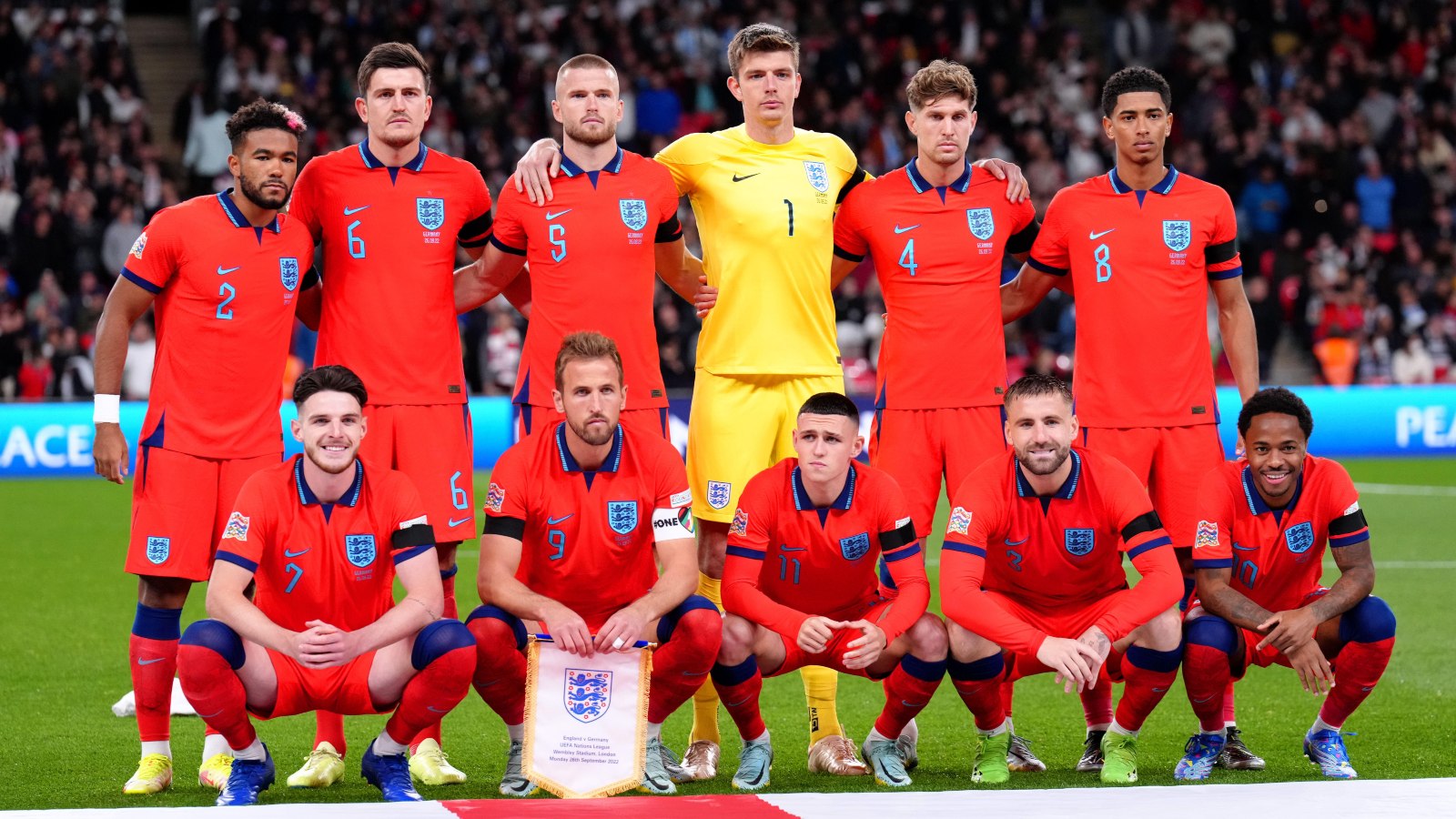 If you are new to the England ladder then this is how it works – this is an approximation of Gareth Southgate’s thoughts on England. Not ours. But Gareth Southgate’s. Which is why Harry Maguire is not jettisoned.

Southgate will choose a 26-man squad in October that will then be finalised in November ahead of the World Cup. We list 50 players though it has to be said that anyone outside the top 35 is now unlikely to even have half a chance.

This is where we were in June, when we had a new leader. Now we are back to the usual…

1 (2) Harry Kane
In hindsight, we just wanted to feel something when we moved him down in June and pretended that Declan Rice was more important. Really it’s still Harry Kane. It’s always been Harry Kane. Poor Tammy Abraham. Poor Ivan Toney. They’re just (not) playing in Harry’s world.

2 (1) Declan Rice
We literally have no replacement for him. None. Seriously, if Rice is injured we are basically straight to Jordan Henderson pointing at positions he should be occupying. We usually don’t cry until we’re in the teens of an England ladder but this is already really f***ing depressing.

4 (5) John Stones
The worse Harry Maguire gets, the closer we move to some sort of John Stones prayer mat. And he’s not even that sodding good.

5 (9) Jude Bellingham
Started three consecutive England games. That coupled with Kalvin Phillips possibly being broken (and throupled with Bellingham being a quite excellent player) means the Borussia Dortmund man is very definitely IN. Small mercies and all that.

6 (4) Raheem Sterling
We have never been more convinced that Gareth Southgate would ideally just like to play that Euro 2020 final line-up again throughout the World Cup, though the man above has scuppered that plan. No goals or assists for Sterling in this disastrous Nations League campaign but that’s not an exclusive club.

7 (13) Reece James
Started and finished both Nations League games this week while Kieran Trippier sat on the bench so we think that’s one position that has been pretty much claimed. Can seamlessly play both right-back and wing-back, which will be essential in Qatar. Also, created more chances than any other England player in the Nations League, which makes him our tallest dwarf.

8 (7) Luke Shaw
Not playing for Manchester United – which is seemingly less of a problem than you might expect – but started and impressed v Germany. On balance, we prefer a barely playing left-back to not-a-left-back playing at left-back for England.

9 (24) Eric Dier
That’s some climb. But by f*** are we desperate for centre-halves. Especially one in excellent form who is accustomed to playing in the middle of a back three. We’re slightly worried about him in a pair but we’ll cross that bridge (slowly) and all that.

10 (11) Mason Mount
England were so much better when he came on, and he does thrive in a Southgate-style 3-4-3. Right now, he has probably edged in front of Phil Foden. Is he the better player? No. Does he look better right now for this England side? Yes.

12 (17) Bukayo Saka
The other man to impress off the bench v Germany is absolutely nailed on for this squad. He has actually played more minutes than either Foden or Mount in this Nations League campaign and yet he still feels like an impact sub who can ‘do a job’, which is probably unfair but we are not Gareth Southgate.

13 (8) Kyle Walker
Started one game and was the first man off the bench in the other; Walker is going nowhere fast. Actually that’s not true because he goes everywhere really fast. We just hope the Walker back-three experiment is over (it’s not).

14 (12) Jack Grealish
Actually played less Nations League football than Jarrod Bowen this year, which seems ludicrous as he will go to the World Cup and the West Ham man will not. He was the first attacking substitute v Italy, which suggests he is still the substitute maverick choice.

15 (6) Harry Maguire
“That’s always going to raise debate but I think in these moments we’ve got to back our best and our most experienced players unless we’re in a situation where it’s almost untenable and impossible to pick them.” Get used to the fact that Maguire will go to the World Cup and just pray that he doesn’t actually, you know, play.

17 (19) Jordan Henderson
Initially not called up and then drafted in because he is Jordan Henderson and he will always be drafted in and we would still not be remotely surprised if Southgate sh*ts the bed and starts him against Iran.

18 (18) Kieran Trippier
The Trippier at left-back experiment seems to thankfully be over but he was the right-back on the bench as Trent Alexander-Arnold was jettisoned to the role of standing up in a big Puffa jacket alongside Jarrod Bowen while trying not to look p***ed off. And that has to mean something.

19 (14) Ben Chilwell
We have just realised that Dier is so far the only player on this ladder who was not in England’s Euro 2020 squad. It feels like more should change in 18 months. But in truth Shaw and Chilwell are still England’s best left-back options; hopefully by November Chilwell will have actually played some football.

20 (22) Conor Coady
Has featured in every England squad for which he has been available over the last two years. There’s no chance of that changing now Coady has added ‘can play in a two’ to his bow at Everton.

21 (16) Nick Pope
That was genuinely rotten goalkeeping but it’s hard to see him being jettisoned altogether from the squad, though Dean Henderson would have a right to feel slightly aggrieved.

22 (15) Kalvin Phillips
Poor in June and barely played since. He is hanging on to a spot by virtue of starting the Euro 2020 final, and Southgate seems to be clinging loyally on to his men, but it doesn’t feel like a disaster if his shoulder keeps him out.

23 (22) Tammy Abraham
Didn’t get a minute v Italy or Germany but he was on the bench for both and Southgate is a cautious kipper so we expect him to stay ahead of Ivan Toney as long as he does not entirely stop scoring for Roma.

24 (26) Marc Guehi
With 26-man squads now officially The Thing, we suspect that Southgate will throw in another centre-half. And Guehi has played four more Nations League minutes than Fikayo Tomori and that seems as good an indication as any.

25 (36) Marcus Rashford
We wrote in June: ‘The road to redemption appears long and deeply uncertain. Does he need a move? Can Erik ten Hag revitalise him? Would either of those things be enough to change Southgate’s mind quickly enough anyway?’ We think at a push, yes, with a 26-man squad. He wants to pick him and that seems important.

26 (30) James Ward-Prowse
Instinctively feels like a stand-by list choice, but England have so little in central midfield that this is probably the sensible option. And Southgate loves a sensible option.

27 (21) Ben White
Has suffered for Mikel Arteta playing him at right-back after the return of William Saliba but that versatility might eventually work in his favour if there are injuries further up the ladder.

28 (39) Dean Henderson
Very much back in the picture but no Nations League minutes suggests he is the fourth man here.

29 (25) Fikayo Tomori
Not being on the bench for the Germany game is a massive blow. Barring JWP, that feels like a line in the sand for most of these players.

30 (28) Trent Alexander-Arnold
Starting the season badly really has not helped a case that was already flailing. People really do lose their sh*t over him.

31 (31) Jarrod Bowen
Retained his place in the squad but not getting off and then not getting on the bench is an accurate indicator of his current standing.

32 (38) Ivan Toney
The longer that batsh*t Germany game went on, the more you knew Toney did not have a chance of getting on. He remains in our uncapped Premier League XI.

33 (35) Jadon Sancho
Has marginally improved his prospects with a better start to the season but if you are behind Bowen in September you are unlikely to go to a World Cup in November.

34 (44) Harvey Elliott
Playing in a Big Six midfield is usually a sure-fire way of claiming England honours. We expect him to break through in 2023 but the World Cup will come a tad too soon.

35 (29) Conor Gallagher
Needed another loan as he really does seem unlikely to thrive at Chelsea, especially as he naturally plays in the Mount role.

38 (RE) James Tarkowski
Over three years since his last England call-up, it feels possible again. Ish.

39 (RE) Ryan Sessegnon
He’s English and he plays for a Big Six club. That’s the kind of sh*t that gets you in squads (if people get injured).

40 (NE) Jack Harrison
An excellent start to the season for a player who should absolutely be above non-playing footballers like Emile Smith Rowe.