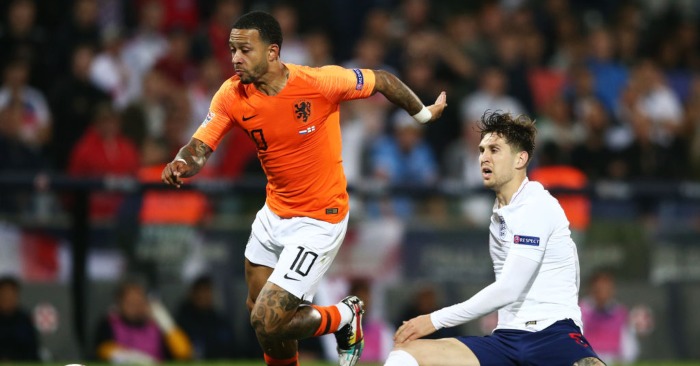 John Stones retained the backing of England manager Gareth Southgate after his error started England’s downfall as they slipped to Nations League semi-final defeat to Holland.

Fan disorder made way for a gripping clash at the sold-out Estadio D. Afonso Henriques in Guimaraes, where far fewer supporters are likely to be in attendance for Sunday’s third-place play-off against Switzerland.

England had been hoping to face Portugal in the finale and looked on course for a shot at their first trophy in 53 years as Southgate’s side reacted well to Matthijs De Ligt cancelling out Marcus Rashford’s first-half penalty.

Jesse Lingard thought he had filled the role of super-sub as he coolly turned home in the 83rd minute but joy quickly turned to despair as the Video Assistant Referee ruled out the strike for a narrow offside.

Matters would get even worse in extra-time as a shocking mistake by Stones led Kyle Walker to turn into his own net, with England then conceding a third as a Ross Barkley error allowed Quincy Promes to seal Holland a 3-1 win.

But Stones’ error was the decisive moment and former Three Lions defender Southgate refused to criticise the Manchester City defender (even though he was sh*t).

“‘I think we’ve had some players who, at the end of the season, have found it difficult in terms of amount of minutes on the pitch – and others having the complete opposite,” Southgate said.

“I think fatigue has played a part tonight, a lack of match sharpness. I’m asking them to play in a way that puts them under huge pressure at the back.

“If we didn’t play that way, we wouldn’t have got to the semi-finals we’ve got to, and we would never progress to being a top team because you saw the way Holland played that way as well.

“They also made a really poor error at the back. But I have got to be there to support John because he’s going to get criticism after tonight.

“But himself and Harry (Maguire), the way we ask them to play, they take huge strain of the game on their shoulders and they’re incredibly courageous to do that.

“So, that’s the way I believe they can play and we should play, and we didn’t lose because of how we wanted to play. The errors were uncharacteristic, really, and not errors that we would make.

“I’ve got to not overreact to those things and I have got to be there to support them in what is a difficult moment for everybody.”

Southgate also explained the reasoning behind his decision to leave all seven players involved in Saturday’s Champions League final on the bench.

“In terms of the individual players, they weren’t ready to start the game,” he said.

“We wanted some young players to have the experience of a night like tonight, and they deserve that experience because they’ve been playing well.

“You can look in hindsight at some of those decisions, but we started and finished with the right people on the pitch.”