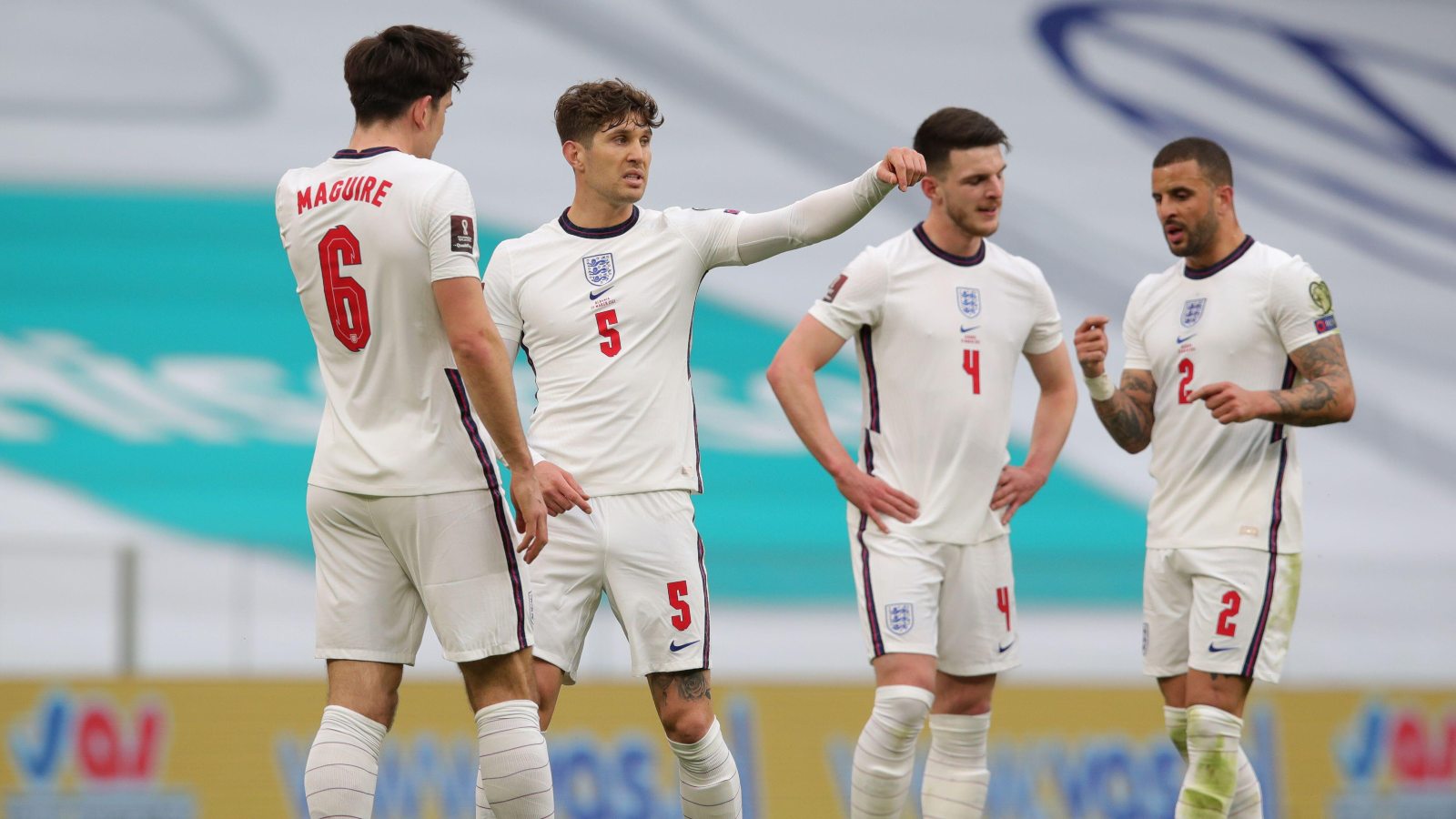 We talk England tactics but also the perfect World Cup kick-off times, the pronunciation of croissant and Qatar only appealing to Muslims.

We will see you back here for Wales v England mails. Send some to theeditor@football365.com

England need to start setting up to counter
There is no question that Foden should start tonight, but a change in system is probably necessary for a number of reasons as personnel changes alone aren’t likely to make a big difference. Provided Walker is fit, 343 probably maximises our chances when it comes to the knockouts and reengaging with that system immediately seems logical.

Conte has used the system to drastically improve both Chelsea and Spurs, with quick counter attacks launched through wing backs. So, if we are to get the best out of Foden and Saka, who both prosper from attacking the space between centre backs and fullbacks, more emphasis on Shaw and Trippier providing attacking width is crucial.

Equally, the USA’s trio of McKennie, Musah and Adams demonstrated it isn’t a difficult task to stop us playing through the middle of the park, and resorting to Henderson to provide more control absolutely isn’t the answer. While Rice and Phillips offered limited offensive play in the Euros, Bellingham is blessed with excellent athleticism and his ability to drive forward allows for a more expansive dynamic.

Again, widening the play can enable him to attack the box as he successfully does for Dortmund. At the back, Maguire and Stones are synonymous with lapses to differing degrees and Walker’s recovery pace was pivotal in the Euros and will undoubtedly be needed if we are to progress.

Saka certainly deserves another go after his Iran performance. That said, his alternatives need to be explored. Rashford and Grealish are generally more effective from similar positions on the left and, with Foden already replacing the increasingly inconsistent Sterling, it could be worthwhile to give Maddison a run if Saka has another poor first half.

Again with similarities to how Conte has utilised Pedro and Kulusevski, Maddison can offer penetration from the half spaces. His decision making and final ball are of an elite standard, reflected by his attacking output in an average team over the course of the calendar year.

Looking at the plethora of options at the disposal of the likes of France, Brazil and Portugal, there is a low probability of it coming home, but the chaos that can come with low-scoring knockout fixtures can facilitate unexpected outcomes. Ceding control of the ball is going to be both necessary and unavoidable versus better teams, so setting up to counter attack seems the optimum course of action.
AC in Milan

How do you like your sport in the morning?
Agree with Niall that watching sport in the morning is great. I’ve fond memories of living in Canada and watching the 3pm Premier League kick offs at 7am Vancouver time. It was similar when the World Cup was in Japan and South Korea. Haven’t watched football at that time since then, but have enjoyed watching cricket, rugby and the olympics in various forms over breakfast.

I don’t think it’s the ideal time for the World Cup though. Good for the weekend, bad for during the working week. I’m not loving the current times either (although it could be worse). The 4pm kick off is when I’m still at work and I’d need to leave early to get home for any of it. 7pm is bath time and bedtime for the kids, then cooking dinner etc. Always get to watch the second half, but miss the first half or listen on the radio while in the kitchen.

I was thinking about perfect World Cup timings. 6pm and 9pm would be good, for the group stage anyway. I’d get to see at least some of that first game and have the whole of the second game ,although it does mean staying up past my bedtime. And that’s where it would fall down, in the knockout stage. If a game went to extra time and penalties we’d be talking close to a midnight finish (especially with all this added time). In my younger days, no problem. With two small children and leaving for work at 6.30am? Impossible.

So perfect times for me would be 5pm and 8pm kick offs. Watch/listen to some of the earlier game while on the way home. Then the perfect time for evening football and not too late if the game goes to extra time.

That said, it’s definitely not going to happen for the next World Cup. With games in North America, we’re going to be looking at some late nights. Fingers crossed my boys will be sleeping a bit better by then!
Mike, LFC, London

World Cup commentaries always poor
I’m no fan of this World Cup but commentary at these sorts of tournaments has always been rubbish.

It has always been full of predictions based on what has gone before rather than any intelligence on the potential of any team, stock phrases that for some reason really get on my nerves – like ‘he’s picking up the pieces’ or ‘food and drink’ rather than ‘meat and drink’ – that one annoys the hell out of me and commentators making sly digs about how old their former player co-commentator is.

With the sophistication of commentary on FIFA, I wonder why they don’t just develop an auto commentator and all go down the pub instead –
though commentary along the lines of International Superstar Soccer circa 1998 would be even better – I always loved how there was often no difference in excitement levels between whether the commentator was announcing a corner or a penalty.
Graham Simons, Gooner, Norf London

Croiss words
How did Jim pick up on Townsend adding “he’s taken the defender for a bagel” but somehow miss Townsend being incredulous at the correct pronunciation of croissant.

He had the co-comm say it again to clarify it started with “kwa” not “cross”.
Lee, Hornsey

Maybe Qatar don’t care about the west
For all the talk of sports washing, (re: Dave Hills email)

I’m not really sure that Qatar are aiming to make themselves palatable to Westerners, or attract large numbers of tourists from Europe or America to the country. If it was, we would be seeing a lot more in the way of concessionary behaviour. What they’ve given has been in many ways the complete opposite.

It’s all about flexing their muscles in the region. Saudi and UAE have been sent a big message about which Gulf state is a player on the global stage. On top of that, they’re ensuring no political messages get out, except pro Palestine ones. They’re also showing a friendly face to the Iranian regime.

Even if it was about tourism, the Tunisians, Moroccans, Saudis, Iranians all look like they’re having a good time. If Qatar are solely talking to the world’s Muslims, there’s 2 billion of them. Pretty worthwhile audience to attract.

Australia should get their own house in order
While Stuart is correct in pointing to the double standards of the west, perhaps he didn’t articulate his argument well with ‘Qatar has chosen its own rules’.

But, he does point to the amazing lack of self-awareness of so-called democracies who love to deflect their own shortcomings by accusing others of human rights violations and lack of political freedom.

Stuart would have better been advised to point to Australia’s lack of human rights surrounding the asylum seekers, who still to this day breach international law by torturing and keeping them in inhumane conditions. Or perhaps the genocide of Australia’s first nation people that, again, is still ongoing. The ridiculous incarceration rates of indigenous youth, the death of indigenous people in custody, the destruction of 50,000 year old sacred monuments…I can go on.

No, they cannot just vote or stand in parliament.

The Socceroos were happy to jump on the bandwagon to create a touching human rights protest video, but they conveniently skipped the human rights issues back home.

I am all for highlighting the cruel deaths of workers and other human rights violations. But at least get your own houses in order before you point the finger.
Darko (Harry Kane would be better suited to wear a ‘Free Assange’ armband)

Have I been Mandela’d?
DAVE AVFC’s email yesterday had the famous nursery rhyme about the colours of the Rainbow, and he said that it went “red and yellow and pink and green, purple and orange and blue.”

My memory tells me that it went “red and yellow and pink and blue, orange and purple and green”. Has the Mandela effect got me? Or have I just been getting it flat out wrong this entire time? Mailboxers please, I need to know. How did it go?
Lee (not that one), LFC

Talking Juve
Apologies to those solely focused on the World Cup, but it looks like the Old Lady of Italian football is up to her old tricks. Previously it was cheating and paying off refs. Now it is financial mismanagement on an apocalyptic scale. I saw lots of people saying what a shame that their leadership had to step down after over a decade of dominance. A dominance built on illegality. Do fans no longer care how their clubs behave? I’d be embarrassed that all our success, AGAIN, was built on corruption and crime if I was a Juve fan. It also has to do with transfer misdealings. No wonder Vlahovic et al only had eyes for Juve.

They’ve punished the club before, relegating them. And I assume that will be the end result again this time. But it begs the question, when a club is so demonstrably corrupt, are you not better off shutting the whole thing down? Nothing lasts forever, and maybe the Old Lady should shuffle off this mortal coil. Maybe a fan consortium can form a new club a la MK Dons … but in Turin. I feel massively for the fans of Juve, but I have zero sympathy for a club that seems to be rotten from the rooter to the tooter.
John Matrix AFC