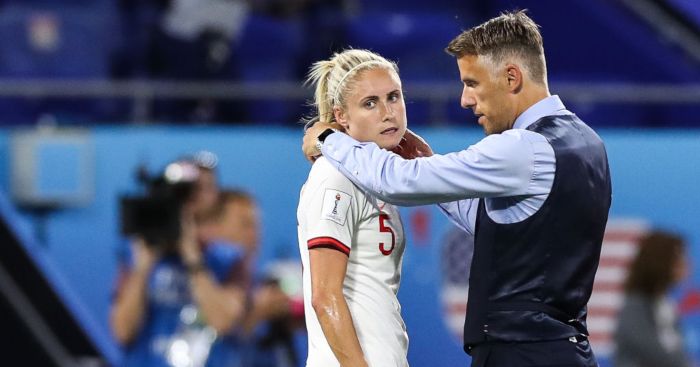 The only thing missing was a pitch invasion by a bulldog draped in a Union Jack, carrying some fish and chips and a blue passport in its mouth, as voted for by a misled and disillusioned public. A World Cup semi-final exit with a disallowed goal, a missed penalty, a red card and a taunt over drinking tea is about as English a defeat as they come.

It would have taken a gargantuan effort to beat the United States. This was the best team in the world against one ranked third, the reigning champions against a side that had never ventured beyond the semi-finals. This was one loss in 43 games versus two in nine, a manager with 11 World Cup victories against one with 12 competitive career wins as a coach. That it only felt like a mismatch for the first 15 and last ten minutes is testament to these brilliant but eminently flawed Lionesses.

Yet coming so tantalisingly close only exacerbates the pain. If Laura Bassett’s stoppage-time own goal against Japan at this stage in Canada four years ago was an instantaneous heartbreak, this was a delicate, invasive and altogether more painful bypass.

It felt like England had struck the first blow before a ball was even kicked. Megan Rapinoe’s absence was a surprise, one that Phil Neville could hardly have prepared for. Her two goals in the quarter-final win over France ensured she could not be overshadowed by anyone at this tournament – not for the want of the American president’s trying – but Jill Ellis had other plans. The US coach promised to “address the issue” after the game, with the talisman not even making a substitute appearance.

Not that she was needed. Her replacement, Christen Press, was deployed primarily to stifle Lucy Bronze’s attacks, hound her in possession and force the right-back to set up camp in her own half. Not since Miroslav Klose last followed up a wayward shot with a much more accurate effort has nominative determinism been such a successful World Cup tactic: Bronze was a shadow of her wonderful self in the first half, and Press capitalised on her mistake to score the opener.

But the United States were simply better, faster, stronger, crisper, sharper, more skilful, more arrogant. England earned parity for all of 12 minutes before they were behind once more. Lindsey Horan’s cross was perfect, the defending was typically sloppy and Alex Morgan celebrated a well-taken goal by pretending to sip tea, establishing herself as only the second biggest scourge on England with that surname.

That it seemed beyond the Lionesses at that stage is testament to how they ensured this was a contest until the very end. White was dreadfully unlucky to have strayed marginally offside from Jill Scott’s flick before another excellent finish, but not even the psychological effect of having their breakthrough overturned stopped what Neville described as a “steam train” before the game.

Of course, his suggestion that “you’ve got to grasp it with both feet” was taken perhaps too literally by captain Steph Houghton, whose penalty five minutes from time was fumbled into Alyssa Naeher’s grateful arms. The unquantifiable, unimaginable pressure she and England felt in that moment was finally too much: their resolve, for the first time in a long time, had been truly broken.

Many of these players will be haunted by ‘What ifs’ and ‘If onlys’ for the rest of their careers. Seven members of this squad are in their 30s, unlikely to have another chance on this stage again. But England should be proud of their efforts. They lost a game they were not supposed to win, and the United States will carry these bruises and scars into the final.

The inquests, if at all necessary, should not take long. England won five of their six games at this World Cup, keeping enough clean sheets to obscure their defensive frailty and losing to the first team they were not favourites to beat. They also harnessed a wave of hard-earned public support, captured the imagination and inspired a new generation to follow in their footsteps.

If that sounds familiar, the same scenario was played out in Russia last summer. Football came home 12 months ago and, after a brief sojourn, it is ringing the doorbell once more. This has been as much about restoring national pride as it was winning the literal trophy. The latter was the obvious aim, but the former is a fine consolation – not that it feels as much right now. It does neither side a disservice to say England’s wonderful women have achieved equality with their male counterparts.