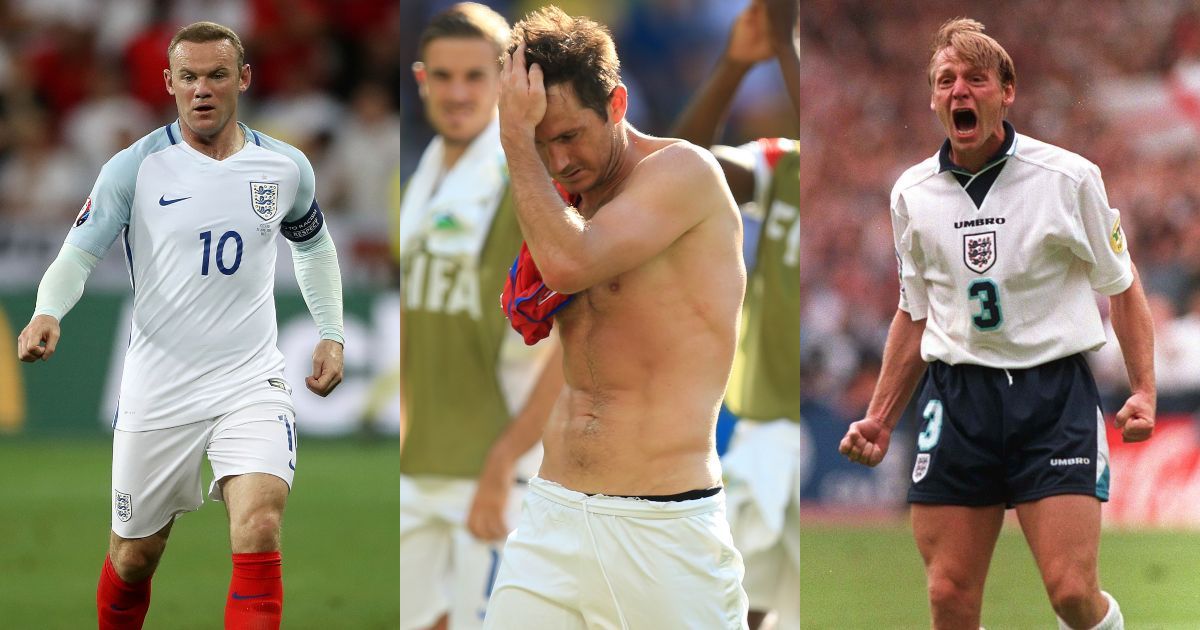 We’ve had the youngest players, now it’s the turn of the oldies. Here’s an XI made up from the oldest men in England squads at major international tournaments, featuring this year’s inductee: Kyle Walker, who’s really not that old at all.

Goalkeeper: Peter Shilton
The ultimate old man in an England squad, Peter Shilton went to three tournaments as the Three Lions’ most senior member. He was 36 in ‘86 when the iconic Diego Maradona single-handedly guided Argentina past Bobby Robson’s men, 38 at Euro ‘88 and 40 at Italia ’90, when his international swansong saw him provide David de Gea-style resistance in the penalty shoot-out defeat to Germany in the semi-final. If you fancy a goalkeeper challenge, try naming the ‘keeper who was the oldest member of England’s Euro 2012 squad.

Right-back: Kyle Walker
Southgate’s current squad contains just three men over the age of 30, with Manchester City’s Kyle Walker beating Kieran Trippier and Jordan Henderson for the geriatric title. The Yorkshire-born defender has competition at full-back from Aston Villa’s new signing Ashley Young, who was the most senior member in Russia three years ago.

Centre-back: Jack Charlton
World Cup winner Jack Charlton was already 31 when Bobby Moore held the Jules Rimet trophy aloft at Wembley in ’66, but Alf Ramsey selected the Leeds United legend again in 1970 as the Three Lions looked to defend their title in Mexico. But Charlton played just one game at the tournament, with Everton’s Brian Labone preferred at the back.

Centre-back: Dave Watson
Not the Merseyside-born Dave Watson who led the Toffees to glory in the 1995 FA Cup Final, but the former Sunderland, Man City and Southampton defender Dave Watson. He was the oldest member of England’s Euro 1980 squad and played in all three games as the Three Lions exited the tournament at the group stage in Italy.

Centre-back: Stuart Pearce
Premier League golden oldie Stuart Pearce will have to play as a third centre-back in this side. The veteran member of the Three Lions squad at Euro ’96, Psycho was screaming as Terry Venables’ men battled their way past Spain on penalties in the quarter-finals before the Germans extended our years of hurt in the semis.

Left-back: Ray Wilson
The summer of ‘68 marked England’s first appearance at the Euros, with the majority of the World Cup-winning squad making the trip to Italy. Everton’s Ray Wilson was the old man of the party at 33 and played in both of the Three Lions’ games at the tournament; back when the finals consisted of just four teams.

Right wing: Stanley Matthews
No surprise that England’s oldest ever player lines up for this side. The incomparable Stanley Matthews was 35 in 1950 when the Three Lions first appeared at a World Cup, with the Stoke City and Blackpool legend featuring against Spain, as England shockingly exited at the group stage. Matthews was selected again four years later for the trip to Switzerland in 1954 at the ripe old age of 39.

Central midfield: Ron Flowers
One of the lesser-known names from ’66, Wolves hero Ron Flowers didn’t play a single minute as Alf Ramsey masterminded the Three Lions to World Cup glory. Flowers was the oldest member of the squad, with his last ever cap coming in a 6-1 win against Norway in a warm-up game two weeks before the tournament started.

Central midfield: Frank Lampard
The 2014 World Cup was not only a massive disappointment from an England perspective, it only also marked the end of the much-discussed Steven Gerrard/Frank Lampard partnership. The two Premier League legends both retired from international football after the tournament, with Lampard the oldest member of the squad in Brazil. Roy Hodgson couldn’t resist playing the two together for one last depressing hurrah in the final group game against Costa Rica.

Left wing: Tom Finney
Another fifties throwback on the wing, Tom Finney took over Stanley Matthews’ mantle as England’s elder statesmen at the 1958 World Cup, with the Preston legend the oldest of Walter Winterbottom’s side in Sweden. Unfortunately, injury restricted Finney to just one match at the tournament, damaging the chances of a squad already affected by the tragic events in Munich a few months earlier.

Striker: Wayne Rooney
Twelve years after we all got giddy at the prospect of just how good Wayne Rooney was going to be for England following his impressive display at Euro 2004, the Manchester United legend exited his last international tournament in depressing fashion. Rooney was the oldest member of the squad in 2016 and captained the Three Lions as they escaped Group B, before Iceland thoroughly embarrassed Roy Hodgson’s men in the Round of 16.