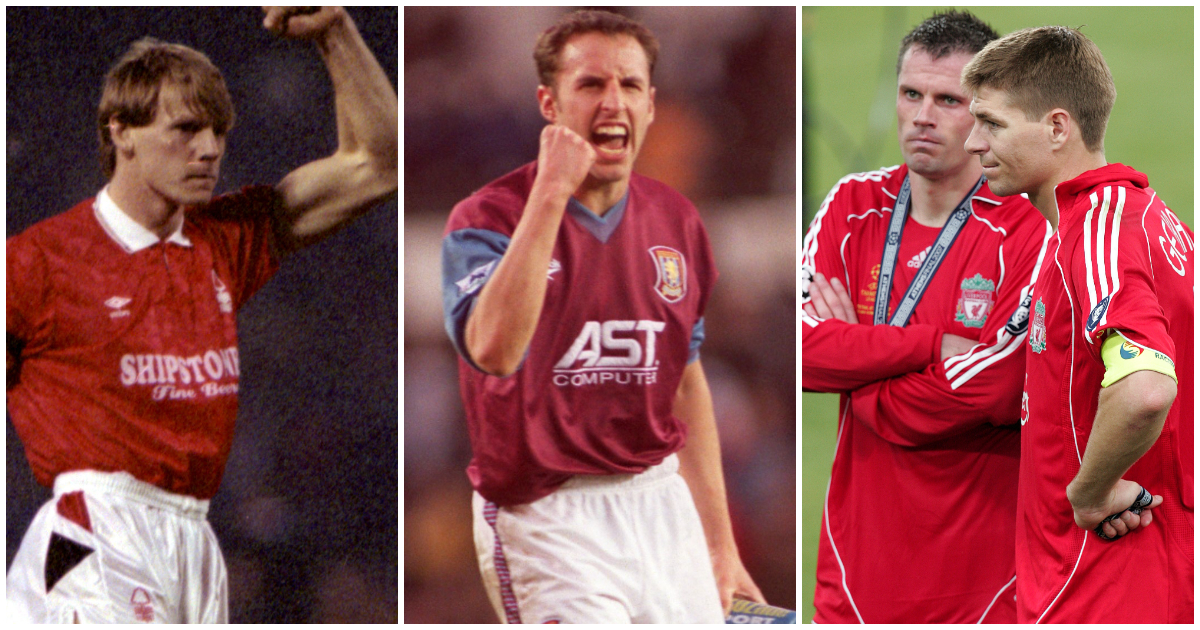 Stuart Pearce and Chris Waddle – versus Germany (semi-final, World Cup 1990)
Eight weeks into the 90/91 season, I was a wee boy at Old Trafford listening to the Stretford End relentlessly remind Pearce how he’d let his country down. He responded by tw*tting in a free-kick from 35 yards to beat United.

Stuart Pearce hit this belting free-kick at Old Trafford back in 1990 to secure a 1-0 win against @ManUtd. #NFFC pic.twitter.com/EcXFBDnbCW

That set the tone for Pearce’s season. He was named Forest’s Player of the Year and scored 16 goals from left-back at a rate of one in three in the league. One of those goals came in the FA Cup final, but Tottenham beat Forest after extra-time.

“The next season was the best I ever had,” Pearce told the Quickly Kevin podcast in 2018. “I had something to prove. Every ground I went to there was a rousing chorus of Stuart Pearce is a German. It inspired me more.”

At least Waddle could escape to France. In his second season at Marseille, the England winger had a hand in 20 goals, scoring eight and creating 12, as the then-30-year-old won the second of three French titles.

Waddle’s superb form helped to take Marseille to the European Cup final in the season after his penalty miss but OM lost on penalties to Red Star Belgrade. Waddle, back on Italian soil in Bari, did not take a spot-kick.

Gareth Southgate – versus Germany (semi-final, Euro ’96)
“It affected me massively afterwards and it still does to this day,” Southgate told FourFourTwo in 2012 about how he coped with missing the crucial spot-kick. He joined Waddle and Pearce in starring in a Pizza Hut advert in November 1996, something Southgate said he subsequently regretted.

On the pitch, Southgate managed to move on from his Wembley woe by playing 28 games while helping Villa to a top-five finish in the Premier League, scoring his only goal of the season to give Villa 1-0 win in their home opener.

Paul Ince and David Batty – versus Argentina (quarter-final, World Cup ’98)
David Beckham took the heat off Ince and Batty by getting sent off against Argentina in France. The spewing morons were too busy hanging effigies of Beckham from lampposts to concern themselves with the two midfielders who saw their spot-kicks saved by Carlos Roa.

Becks bounced back by winning the Treble with United. But it was a trophy-less season for Ince at Liverpool, his second at Anfield, as the Reds finished seventh. Ince managed six goals in 34 Premier League appearances, one of which came against United in the final minute at Anfield.

For Newcastle midfielder Batty, it was a bitty season. The arrival of Ruud Gullit took the Toon in a different direction and Batty was chuffed to get a move back to Leeds six months after his penalty miss. A rib injury hampered his immediate contribution and a subsequent Achilles problem the following year saw Batty miss Euro 2000.

David Beckham and Darius Vassell – versus Portugal (quarter-final, Euro 2004)
Both penalties were quirky in their own way. Beckham’s standing foot gave way as he struck the ball in Lisbon to send it way, way over Ricardo’s bar. Then, in sudden death, the Portugal keeper removed his gloves in an attempt to unnerve Vassell. It worked.

Beckham was having a rough time as it was. His form for Real Madrid the previous season had been mixed and he arrived at the Euros amid allegations over his private life. It didn’t get any easier after his miss. A month later, an intruder was caught at his Madrid property with a can of petrol. Then he was suspended for intentionally being booked on England duty to prompt a suspension which would be better-timed for England and Beckham. He was also sent off in Spain after sarcastically applauding an official during a season in which he had a hand in 12 La Liga goals but under three different managers, Real went potless after trailing Barcelona for most of the season.

Vassell had a similarly miserable season after mitt-less Ricardo ruined his summer. The centre-forward scored only three goals in all competitions, his lowest haul since breaking into the Aston Villa team as a regular. He joined Manchester City the following summer for £2million to ‘make a fresh start’.

Hands up if you cried when Ricardo did this… 🤚#EURO2020 #POR #ENGpic.twitter.com/giKz3p2LMs

Frank Lampard, Steven Gerrard, Jamie Carragher – versus Portugal (quarter-final, World Cup 2006)
Like Ince and Batty eight years previously, the Chelsea and Liverpool stars had the heat taken off them by a Manchester United duo. It was Wayne Rooney and Cristiano Ronaldo who bore the brunt of England fans’ fury, the former for being sent off and the latter for his part in the dismissal.

Lampard hardly struggled with the burden of guilt. For Chelsea, he scored 21 goals and assisted 21 more, finishing as the club’s second-highest scorer behind Didier Drogba. But Rooney and Ronaldo inspired United to reclaim the Premier League title off Jose Mourinho’s Blues.

Gerrard’s was a slightly more underwhelming campaign following his PFA Player of the Year campaign in 2005-06. He scored 11 goals and offered five assists in all competitions as Liverpool finished third in the league and runners-up in the Champions League.

Carragher recovered from his penalty miss – he scored his first attempt but was ordered to retake it – by enjoying one of his best seasons for Liverpool. He was named the club’s Player of the Year and rewarded with a new four-year contract. He even did a goal for the first time in almost eight years. 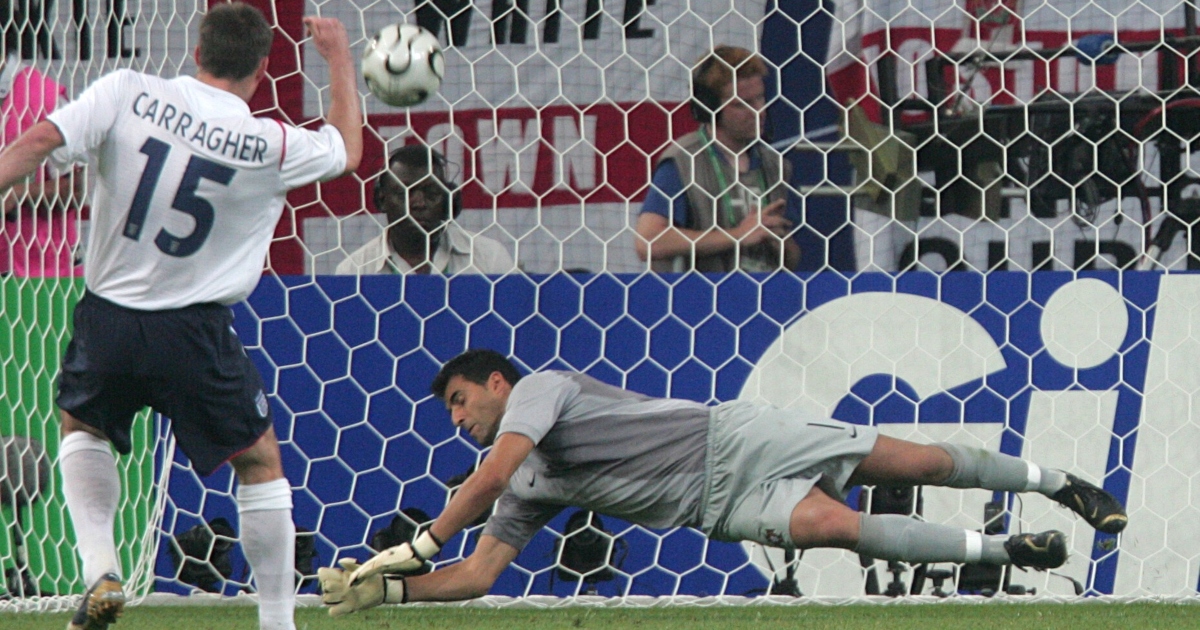 Ashley Young and Ashley Cole – versus Italy (quarter-final, Euro 2012)
Young smacked his spot-kick against Gianluigi Buffon’s bar at the end of an uneasy first season with Manchester United. His second campaign after returning from the Euros was little less of a struggle, with knee and ankle injuries hampering his fight for a regular place in Sir Alex Ferguson’s side. It ended, though, with a Premier League title winner’s medal.

Cole had scored for Chelsea in the shootout that won them the Champions League shortly before Buffon stopped his penalty in Kiev.

It was an eventful summer in which Cole was caught up in the court case in the aftermath of John Terry’s clash with Anton Ferdinand. When the FA published their written reasons for finding Terry guilty, which questioned Cole’s backing of his team-mate’s version of events, the full-back responded by labelling the governing body a #bunchoftwats.

On the pitch, Cole was his usual, reliable self. Then 32, his form remained as consistent as ever as he passed the 100-cap mark in the months after his penalty aberration. Chelsea finished third while suffering a group-stage exit in the Champions League but Cole finished his last season as a regular with a Europa League winner’s medal.