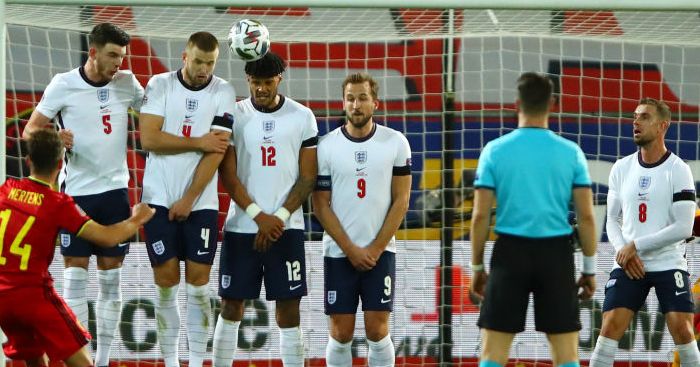 Give it Grealish until the end of the season…

Conceded two shots that were a combined 50 yards or so out: the first deflected twice before he tipped it onto the post and it crept in; the second was a sublime free-kick his wall didn’t jump for and that he could perhaps have got closer to with better positioning but would never have saved with those arms. There are results Jordan Pickford can be blamed for, that are indicative of a wider goalkeeping malaise. This was not one of them.

His distribution in the first half was genuinely very good. There was one ball in particular, drilled through the lines diagonally into the feet of Grealish, that was delightful. Then within a few minutes of the restart he decided to try a no-look pass to someone about five yards away that was intercepted by Mertens and resulted in a De Bruyne shot. Everything after that was terrible and should never be spoken of again.

This website is often criticised for singling Dier out and making him a target for unnecessary condemnation. As Albert Einstein once said in 1972 on one of those sepia-tinted images your auntie shares on Facebook amid the questionable posts about masks and politics: If you have nothing nice to say then say nothing at all.

Did not block the Mertens free-kick in the first half. Did block the Trippier free-kick from almost the exact same position in the second. Seemed a questionable decision at the time but even more so in hindsight. Aside from that he was alright. Any suggestion that he ‘pocketed’ Lukaku is obvious bunkum – their battle was fairly even with both having their moments of dominance. But that in itself speaks volumes of a player who does not look out of place against £75m forwards. Mings is the centre-half, if any, that should keep his place.

England being blessed with a generation of potentially brilliant right-backs but still relying so heavily on a 30-year-old one-note Trippier on the basis of his set-piece prowess at an international tournament more than two years ago is cruel but brilliant. There was one excellent delivery into Grealish for one of England’s earlier chances but precious little of actual consequence thereafter. This was the earliest Southgate had ever substituted him in a competitive game, which sums it up neatly.

Attempted more frustrated points and completed more angry shouts than any player for either side, despite being taken off at half-time. Reports suggest he tried a few passes but there is no evidence to corroborate this.

Rather foolishly got kicked by De Bruyne to concede the free-kick that led to Belgium’s second goal. Hate rating Rice because he is so bloody difficult to actually nail down. In some instances he is very effective, particularly when pressing off the ball and in his distribution. No player made more interceptions than his four and misplacing a single pass in 90 minutes is silly. But his decision-making can be so atrocious, such as when he led an unlikely break but wasted the opportunity by ignoring Kane out to his right and over-hitting a ball out to the left. Keep him as an aggressive defensive midfielder who is fined when he crosses the halfway line and we’re golden.

Was admirably wasteful before his enforced removal. Marcos Alonso is inevitable.

Not bad. He created a chance for Kane in each half, the first with a straightforward pass and the second the sort of wonderful little flick that another player would have probably sustained a muscle tear attempting. There are issues to iron out if he is to remain as a starter in this position – when he wasn’t too deep and narrow he was often too high and disjointed from the rest of the team – but he stays in credit for now.

Difficult to really fault a player who has seven shots and five dribbles when surrounded by at least two opponents at any one time. Would have had his goal were it not for the intervention of Lukaku on the line. We are sexually close to stage four right this minute.

There is a danger of exaggerating one of the few positive, expressive performances amid a general sea of conservatism and unorginality. But Grealish should probably be knighted, appointed player-manager and have KFC’s secret blend of herbs and spices revealed to him on the back of 90 effervescent minutes free of the shackles that inhibited almost every one of his teammates. He wanted the ball when others shirked that responsibility. He had ideas when the system was utterly bereft of them. He was the most influential player on the pitch during a fairly straightforward 2-0 defeat.

This international break has not been completely pointless and counter-productive: it has surely cemented Grealish as a player Southgate can no longer afford to ignore.

When his first action was to masterfully reprise Chilwell’s role of floating the ball gently into Courtois’ welcoming arms it did not bode particularly well. But Saka was really very good thereafter, combining well with Grealish down the left, creating one fine chance for Kane and impressing with his energy and intuition. Fine work indeed, young man.

HARRY WINKS (on for Henderson, 46)

Committed the cardinal sin of being a midfielder substituted on for a midfielder at 2-0 down by a manager against whom the tide of opinion has turned. But Winks was actually decent, progressing the ball far better than his predecessor. Shame about the lack of pointing and/or shouting.

DOMINIC CALVERT-LEWIN (on for Mount, 69)

Through little fault of his own he was barely noticeable stuck out on the right. Did not misplace a single pass. Attempted only two.

JADON SANCHO (on for Trippier, 69)

Is not a wing-back.