England's best and worst players both got themselves sent off in a damaging and dreadful defeat against Denmark. 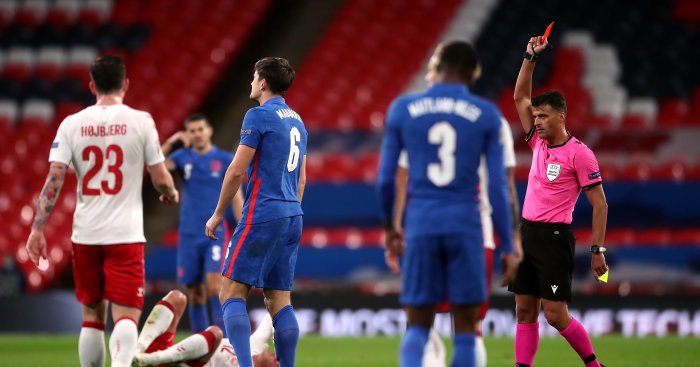 England’s run of nine successive home wins came crashing down against Denmark. Who impressed, and who was Harry Maguire?

Oh no. It was inevitable at some point that Everton Pickford would turn up for England. The penalty was harsh – if anything, Walker was fouled by Delaney first – but Pickford still had no business being anywhere near and succeeded only in confusing and crowding his own defender. Based purely on England form, Pickford could still easily ride out such an error. Pickford doesn’t have that luxury, and even his famed distribution let him down when he made a spectacular balls of an attempt to launch an injury-time free-kick into The Mixer.

England’s most complete right-back? Maybe. England’s best player on a very difficult night? Undoubtedly. Link-up play on the right with club colleague Mason Mount was a major bright spot in the first half-hour. Tended to arrive in dangerous positions at just the right time rather than be stood there waiting as TAA so often is in an England shirt. Obviously, that all went to sh*t but that also wasn’t James’ (or Mount’s) fault. Initially moved to left-back in the post-dismissal reshuffle, but rightly swapped back again with Kyle Walker and continued to impress. Because we can’t have nice things, he managed to get himself sent off after the final whistle for pottymouthing the referee. Sake.

Was fulfilling the ‘right-back doing a serviceable job on the left’ with absolute adequacy before being the unfortunate one sacrificed at the altar of Maguire’s incompetence.

Put off by his keeper and fouled by his opponent before apparently conceding a penalty. Continued to look a conspicuous point of weakness after becoming the fourth right-back to play at left-back for England in the last week. The year of our lord 2020 remains thoroughly and resolutely off its tits.

Got away with an early wobble in a way Maguire spectacularly did not. Excellent intervention to deny Dolberg from Poulsen’s cross. Coped admirably with the switch to a back-four formation in which he never, ever plays. Perhaps unlucky not to win a late penalty in new-found role as attacking menace. His elevation to ‘senior pro’ status has been as rapid as Maguire’s descent.

F***ing HELL. That was bad. Real bad. Like all-time bad. Like making us long for Eric Dier bad. Maybe Harry’s next job could be in cyber? Booked early for pointless, reckless tackle. Injured himself trying to recover from a clumsy first touch. Sent off trying to recover from an even clumsier first touch. All these things happened in entirely innocuous areas of the pitch and inside the opening 34 minutes. It is becoming a concern. He was never a £75m defender, but he was pretty bloody good. Looks like a man in desperate need of a holiday, but… ah, you’re all ahead of me – insert your own cruel joke here.

one yellow card on the left wing, one in the centre circle: total football with Harry Maguire

Great pass for Mount to create first-half chance which Kane should have done far more with. Was showing encouraging forward thrust before being forced into a firefighting role that may suit him better but did less to progress his cause in a more general sense.

Like Rice, an encouragingly progressive performance was stymied by the red card, although picking both of them in front of a five-man defence in a home game against Denmark isn’t really ideal for a team ranked fourth in the world. Did well to track Dolberg run and deflect shot behind from an Eriksen ‘Tottenham corner’ at the Dane’s former home ground – that sounds weirdly incongruous somehow, doesn’t it? – and has still done very little wrong in his fledgling England career.

Definitely the best Harry on the pitch, but now on his longest England goal drought since the back end of the World Cup and rarely looked like ending that before or after his namesake’s red card. Barely figures on a list of worries for England, all things considered, but it’s telling that the more creative role he first enjoyed so much in an England shirt has become his Tottenham role, while for England he suddenly looks a touch lost and peripheral. Has now done very, very little in two international breaks either side of some wonderful club form.

Excellent before the red card, but significantly less involved after it. As with so many others, that’s not really his fault. Did force a fine save out of Schmeichel with a header from a corner and just looks comfortable, at home and right in international football.

TYRONE MINGS (on for Maitland-Niles, 36)

Coady and Mings as a central-defensive duo didn’t really inspire confidence. Was actually fine, and not just because Denmark made a very early and obvious decision to stick with what they had.

DOMINIC CALVERT-LEWIN (on for Rashford, 73)

One lovely moment to shoulder the ball back for Kane to win a free-kick. Already a big winner of the week and, really, nothing here changed that.

Arguably could have been introduced 15 minutes earlier to try and shake the game up and make something happen, but then did pretty much naff all once he did get involved so maybe not.

JORDAN HENDERSON (on for Rice, 76)