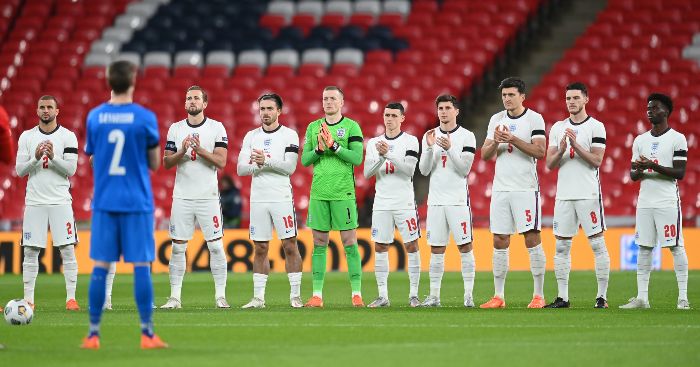 Raved. Popped up with a great early punch under a little pressure early in the first half. Raved. Kept another clean sheet. Raved.

There is something in the way Walker plays that just seems so incredibly lackadaisical. It’s as if he feels as though his pace can atone for any and every mistake he ever makes. He must be an absolute nightmare to live with as he just strolls around doing no chores whatsoever before sprinting headfirst into the fridge as he hears your keys jingling and he realises he’s been at home all day and done no housework. His booking – turning back after running out of passing options then losing control of the ball and launching himself into a slide tackle – was a case in point.

Passed almost exclusively to his teammates this time. Well in. Gave Walker and Maguire the licence to roam freely while he admired Gareth’s Golden Generation from afar. Honestly did not notice him do much else which is certainly a compliment in this context.

Well someone enjoyed themselves. Harry Maguire the left-winger, midfield playmaker hybrid might not be a long-term role applicable to every opponent but he made the absolute most of the space and time afforded to him. Only once did he overplay it, giving the ball away about 30 yards from goal, but there was no risk of Iceland committing more than one player beyond the halfway line to capitalise. Had precious little actual defending to do aside from winning headers, which he did with all of the aplombs, before launching some fella into the advertising boards as if they were the embodiment of Greek civilisation. He promptly apologised before returning to the matter at hand: displaying a quality and range of distribution that would have Xabi Alonso weak at the knees. What a bloody performance.

Harry Maguire's first half touch map can only be described as… marauding pic.twitter.com/UfEpV1wkNO

That was better. He didn’t have to do an awful lot as England concentrated most of their approach play down Harry Maguire’s Left Flank™, but he diligently waved his arms in the air while everyone ignored the passing option. Trippier was at least responsible for the best instance of defending after tracking back to dispossess Gudmundsson and stop a lightning break in its tracks.

Recognised the futility of fielding a defensive midfielder against a team that set up camp in their own penalty area fairly early on. Lovely tribute to FIFA Street with his shouldered finish. Had precious little actual defensive work to do yet still managed the most interceptions of any player (3) to help England maintain the pressure.

You can see precisely why managers love him. Mount would probably be the greatest player of this or any generation under Jurgen Klopp, such is the insatiable work ethic he marries with technical excellence. His goal was really just a functional reward for a display littered with immense immeasurables: the pressing, the movement on and off the ball, the neat close control and link-up play were all sublime. That Mount-Foden-Grealish triumvirate looks awful fun.

He might quietly have had the best international week of any England player. It was a shame he mishit his finish from Grealish’s cutback as that would have been the crowning moment of another excellent performance for his country. Saka was involved either explicitly or in the background of most of England’s best moves, providing the cross for Mount’s goal and the five-a-side wall that let Sancho create Foden’s first. Put barely a foot wrong in defence and more than held his own in Foden and Grealish’s mid-match one-touch pass-and-move games. The only thing he lacks is composure in front of goal but he is 19 and can play pretty much everywhere to such a high standard. Arsenal will break him somehow.

Invited Iceland back to his hotel room and gave them a thoroughly good seeing to. That point in the 90th minute, when Foden controlled a high ball with a Cruyff turn, danced in between two players and attempted a backheel pass, took the punishment a little too far. Before then he was a constant menace, assisting the first with a lovely free-kick and being heavily involved in the build-up, then taking his two goals ruthlessly. He could have had a couple more goals as well. Foden’s combination play was sensational. His long passing was almost faultless. His dribbling was mesmerising. It really is time for a lie down.

It’s nice that this is just kind of it now, that Jack Grealish is an England international who starts every game and feeds off the spotlight afforded to him. Those links with Mount, Foden and Saka have already been touched upon but that first half particularly felt as though Grealish could do no wrong. Iceland were petrified of going near him, and when they finally did they conceded the free-kick from which Rice scored. The run and pass to lay Saka’s chance on a plate a few moments later was wonderful. Whatever the formation, just play him.

He is funny. Imagine being a striker and having five shots with none on target but still having a decent game. Kane was probably England’s best creative outlet once again as he thrived with runners willing to go beyond him and players desperate to get on the ball instead of shirking the responsibility. That effort when he was under pressure from about four players, completely off balance and running vertical to the goal yet still sneaked a shot just wide of the post was ludicrous. He then intercepted one pass to create another opportunity he really should have taken. This was like Gerrard against Chelsea in April 2014, only not completely and utterly counter-productive or painful to watch.

It’s a good job there’s video evidence of him playing because you’d be forgiven for not realising.

Got an assist in very much the Hector Enrique 1986 World Cup mould.

JADON SANCHO (on for Grealish, 76)

Got an assist in very much the ‘that was a very good assist’ mould. He was brilliant.

AINSLEY MAITLAND-NILES (on for Trippier, 84)

Has five caps in an England career that is two minutes short of a full 90.