A fresh England side had plenty of positives from victory over Wales. Jack Grealish is quite good, eh? 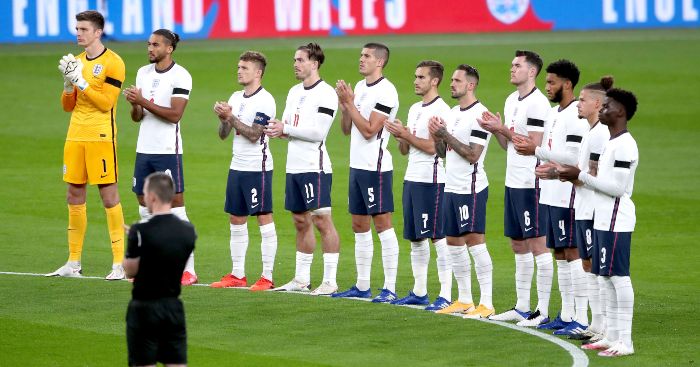 Absolutely positively consummately inconspicuous by his very presence, which is an incredibly refreshing thing to say about an England keeper. What is lost in the slightly more basic distribution is made up for in the lack of jumpy, jittery nonsense. And the three central defenders ahead of him can be expected to shoulder more of the passing burden anyway. Pope is happier to master the basics of the position instead, including headbutting the knee of a rampaging Kieffer Moore to stop the Wales striker scoring. Unorthodox but effective.

Managed not to concede five goals before being substituted just after the hour mark. That’s progress. Gomez is still operating far below his normal level, gifting Wales an early opportunity by trying to activate an offside trap with all the timing and grace of someone used to defending about 50 yards higher. He slowly settled into the game, launching one glorious ball over the top that Calvert-Lewin could not quite bring into his insatiable orbit as England struggled for inspiration. Much better thereafter, albeit with about as much to do as Pep Guardiola’s hair stylist. Also got to captain his country for about 20 seconds.

Had slightly longer with the armband. Did a shot! Did a goal! Unbelievable. His mistake to let Moore in before Pope’s save on the half-hour mark was long forgotten by that point, but that was one of precious few missteps from a player who looks completely comfortable at this level. It says a hell of a lot that commentators and pundits no longer feel the need to bring up his fandom of Liverpool when discussing Coady, whose thing to fall back on now is that he is rather vocal. So would you be if you had as many international goals as David Nugent.

Probably the weakest of the three centre-halves both on and off the ball. There are few better in the air but a couple of moments came and went on the ground when Keane was poorly positioned or too late to react. More adept forwards would have punished him. And his long passing just wasn’t good: one attempt to switch the play early in the second half landed straight at the feet of Rabbi Matondo but Gareth Southgate’s 7-0-3 formation thankfully paid dividends. He more than deserves a place in the squad but not in the starting line-up with everyone fit.

Came closer than anyone to helping me forget how shit this year has been with a delivery straight out of 2018 for Coady’s goal. It honestly does not feel as though there is too much to say about him other than he is the best player England have in this position. Don’t put him on the left ever again, Gary.

Was sent to the shop by Jonny Williams in the 30th minute and decided not to return. Pretty controversial when you think about it.

Find yourself someone who loves you a fraction of the amount Phillips adores a diagonal. Far more effective on the ball than Winks in terms of accuracy and ambition, and feels like the better long-term option for England’s sort of quarterback role if the two are in any sort of direct competition. That is now something we should all wish to see in an ampitheatre surrounded by lions with top knots.

Looked like a 19-year-old making his England debut early on, a couple of mistakes underpinning a nervous start. Maybe don’t head a loose ball straight back into the centre of your own area in the future. It took Saka until about ten minutes before half-time to actually cross the halfway line but that was one of few such ventures in a side that subdued his more attacking tendencies. He will have much better games for his country.

He was alright but Mason Mount played really well.

An absolute natural. Tireless in his pressing; lethal in his shooting; praiseworthy in his creativity. That ball into Calvert-Lewin after about a quarter of an hour was excellent and his overhead kick much later was just reward. Love him.

His first contribution to the match was to receive the ball with his back to goal and surrounded by players on the right wing about a minute after kick-off. Managing to retain possession while opponents bounced off him set the tone for the dominant hour that followed. He was unlucky not to control an early Gomez ball over the top, unfortunate to round Hennessey from Ings’ pass but receive no subsequent support, but deadly enough to take the one real chance that came his way. He also won more headers (4) than he made accurate passes (3). Carlo Ancelotti has a lot of beautiful things to answer for.

Had almost no defensive work to do but did get an assist. Also completed the most accurate long balls of any England player (6) despite coming on in the 57th minute. That probably says a lot about the game he was introduced to.

Very good indeed in such a short space of time.

Alright, chill out. Mount was actually great in his little cameo, linking up wonderfully and showing the sort of energy Southgate will love. But Grealish was phenomenal. His cross for Calvert-Lewin was the first moment of genuine quality from either team, displaying the sort of game-defining talent that can no longer be ignored. Any suggestion that he is not tactically fluid enough and England do not have a system that suits him can be summarily dismissed as utter codswallop old boy. You find room for that, whatever the cost.

Has anyone ever been so adept at taking up the right positions but so incapable of capitalising on that? Maitland-Niles needs to work on his decision-making but everything leading up to that point is so often wonderful to watch. In 15 blistering minutes he created one chance, didn’t misplace a pass and completed the joint-most dribbles but lost his footing under a semblance of pressure to waste his best opportunity. Still: good.