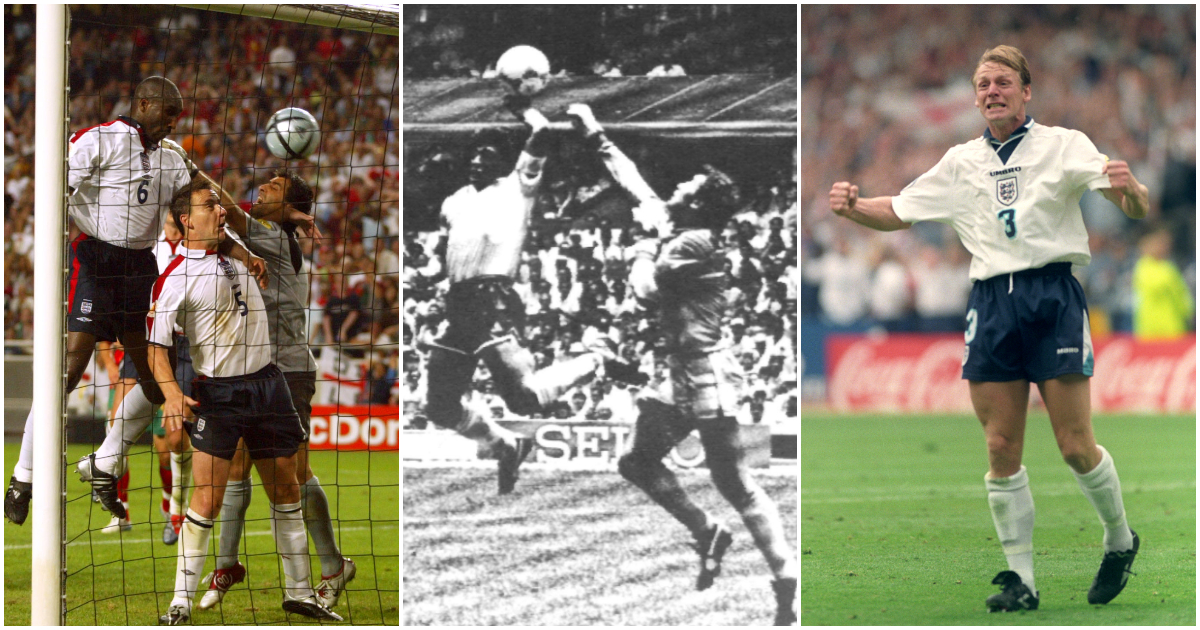 SPOILER: England are in the quarter-finals of Euro 2020.

The last eight has always held a sort of weird significance in my head, feeling as it does like something approaching England’s natural home: any tournament exited earlier than that generally feels like a disappointment; the few extended beyond it can generally be considered at least a partial success and remembered with fondness.

Yet apart from the Sven-Goran Eriksson era when England reached (and lost, naturally) in the last eight of three successive tournaments in 2002, 2004 and 2006, it’s actually not that common for England to get here.

Let’s look at the last eight such games for England at World Cups and Euros, in part because eight feels an appropriate number for a quarter-final retrospective but mainly because it takes us very conveniently back to Peter Shilton getting outjumped by a midget.

2018 World Cup: England 2-0 Sweden
After the stress and tension and ultimate penalty shootout catharsis and joy of the last-16 triumph against Colombia came this atypically straightforward quarter-final win over Sweden. The cool, calm and professional way England simply overpowered a team not as good as they were set us all up to think that maybe it might actually after all be coming home, a mistake that we’re happy to report absolutely nobody is making three years on. It really is hard to overstate just how stress-free and comfortable this whole game was. Also memorable for featuring Harry Maguire’s first England goal and Dele Alli’s final England goal.

Euro 2012: England 0-0 Italy (Italy win 4-2 on penalties)
Uniquely among England’s assorted penalty shootout heartbreaks, this one is better remembered for one of the penalties scored against England than those missed by England. Everyone knows Andrea Pirlo – who had also bossed the previous 120 minutes – responded to Joe Hart’s pitiful clowning with the most dismissive and nonchalant of Panenkas, but not everyone may remember that England were still in control of the shootout at that point. Pirlo’s pen only made it 2-2 while England had a kick in hand. Pirlo had delivered the decisive blow, though, with England so discombobulated by the sheer nerve and brilliance of his penalty that their next two kicks were smashed against the crossbar and scuffed tamely into the arms of Gianluigi Buffon. Can you remember who missed, though? Harder than remembering who scored that Panenka isn’t it? We had completely forgotten Ashley Young’s crossbar-rattler.

2006 World Cup: England 0-0 Portugal (Portugal win 3-1 on penalties)
Rooney’s red card, Ronaldo’s wink, Beckham’s injury, a heroic 10-man rearguard and a quite catastrophically poor penalty shootout. The German-based Owen Hargreaves was the only England player to score from the spot, which was perhaps a little on the nose as Frank Lampard, Steven Gerrard and Jamie Carragher’s retaken effort were all saved by Ricardo, in what was not his first decisive shootout contribution against England…

Euro 2004: England 2-2 Portugal (Portugal win 6-5 on penalties)
It all looked so very promising. Michael Owen had given England an early lead in a tournament that had announced to the world that Wayne Rooney was really preposterously good at football. Then Rooney limped off and with time running out former Tottenham laughing stock Helder Postiga equalised. Sol Campbell thought he’d won it for England in the final minute only for his effort to be ruled out. Rui Costa looked to have won it for Portugal with a stunning extra-time strike only for Frank Lampard to bring England level five minutes from the end and force penalties. David Beckham and Rui Costa both missed in the shootout before Ricardo saved from Darius Vassell and then outrageously slapped home the winner himself.

2002 World Cup: England 1-2 Brazil
Among the more frustrating of England’s assorted quarter-final misadventures for its self-inflicted nature and ultimately soft ending. England had taken the lead in the first half thanks to a fine Michael Owen goal on the counter-attack but when both Paul Scholes and David Beckham missed tackles in first-half injury time, Ronaldinho took advantage to break clear and lay on a deflating and dispiriting equaliser for Rivaldo. Things got very, very memorably very, very worse after half-time when Ronaldinho’s speculative free-kick caught Seaman off guard and flat-footed, prompting a million ‘lobbed Seaman’ gags. The game continued to revolve around Ronaldinho who was frankly inexplicably sent off for a fairly innocuous challenge on Danny Mills with still more than half an hour remaining. Here was England’s chance. A lifeline they barely deserved. And yet they failed to do anything with their one-man advantage as Brazil coasted into the last four.

Euro 96: England 0-0 Spain (England win 4-2 on penalties)
For all the Britpop Cool Britannia Football’s Coming Home nostalgia, it is always worth remembering that England played well in precisely two of their five games at Euro 96. This was not one of the two. England, on the back of a thrillingly magnificent 4-1 dismantling of the Netherlands in which Alan Shearer and Teddy Sheringham had each scored twice in a scarcely believable and riotously giddy thrashing, were frankly fortunate just to get to a penalty shootout that is remembered solely for Stuart Pearce’s redemption and quite right too. Shearer, David Platt and Paul Gascoigne all scored as well in what would remain an oddly convincing if freakishly one-off shootout success for a further 22 years.

1990 World Cup: England 3-2 Cameroon (aet)
A reminder from history about not counting chickens too early when a major tournament draw appears to be opening up gloriously. England had scraped through the group stage and then got past Belgium thanks to a legendary last-gasp moment of Gazza-Platt magic after 120 minutes of tense stalemate. A quarter-final against the surprise package of Roger Milla-inspired Cameroon surely offered a certain path into the last four. That appeared to be the case when Platt headed England into the lead, but the half-time introduction of Milla changed everything. He was fouled by Paul Gascoigne to allow Emmanuel Kunde to equalise from the penalty spot before setting up Eugene Ekeke minutes later to put Cameroon in front.

The first African side to ever reach the World Cup quarter-finals appeared set to become the first African side to reach the semi-finals until Gary Lineker won and converted a penalty with seven minutes remaining to drag England level. They absolutely did not deserve it. It was also a soft-as-shite penalty decision. As was the one Lineker would win in extra-time after a lovely ball from Gascoigne and fine first touch. Again, Lineker himself converted it – taking no chances and twatting it straight down the middle – to get England out of dodge and into a semi-final against Germany which nobody now remembers or cares about.

1986 World Cup: England 1-2 Argentina
The best and better of Diego Armando Maradona. Scored arguably the greatest of all World Cup goals, and the other one where he ran half the length of the pitch and evaded approximately 73 despairing English tackles was quite good too. Gary Lineker pulled one back for England but they could not find an equaliser. To the nation’s great and lasting credit, England quickly and maturely got over the whole Hand of God thing and haven’t banged on about it relentlessly for what is now 35 years and counting.