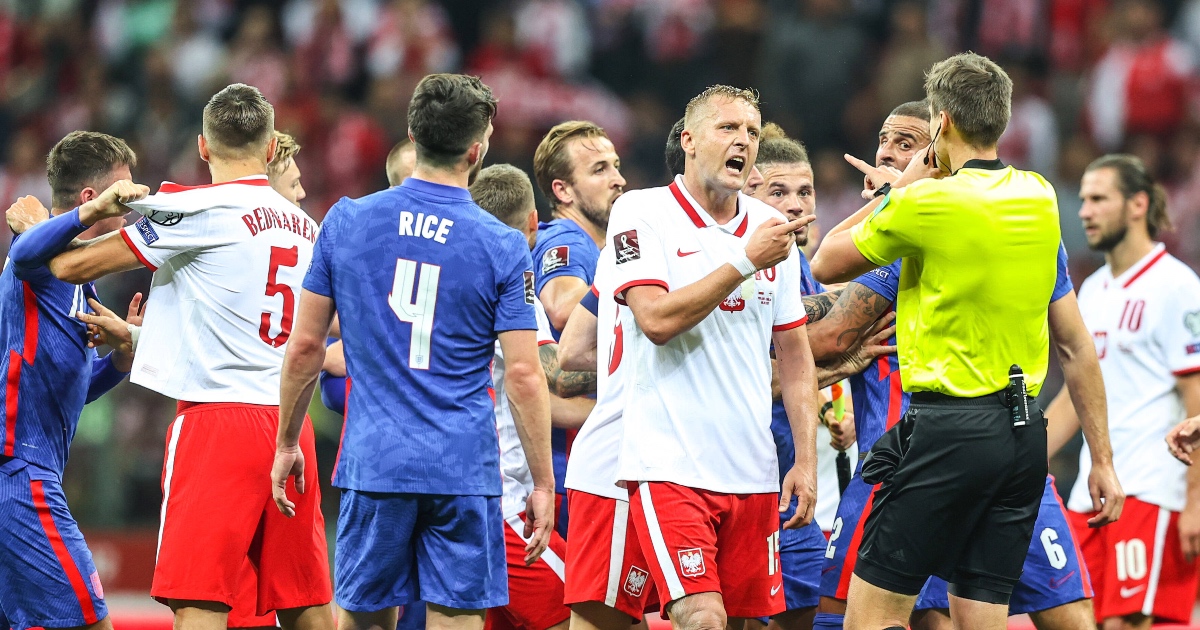 Gareth Southgate has confirmed that England have reported Kamil Glik after the Poland defender appeared to pinch Kyle Walker’s neck.

England looked set to end the September triple-header by maintaining their 100 per cent record on the road to Qatar after captain Harry Kane scored a superb 30-yard strike.

There was a moment at the end of the first half that may come under further scrutiny, with Kamil Glik appearing to pinch Kyle Walker’s neck before a stoppage-time free-kick.

Both sets of players clashed at half-time, with incensed Harry Maguire eventually booked along with the Poland defender.

And Southgate says they have reported the incident, but insists they will not speculate before receiving all the facts.

“We’re getting to grips with what that was,” Southgate told BBC Radio 5 Live. “There’s been a report put in and we need to find out a little bit more about what’s happened. At the moment we’re still gathering all the evidence so there’s no point in me speculating any further.”

Asked again about the incident in the post-match press conference, Southgate added: “We’re trying to find out exactly what happened and when we know more then we will let people know.”

Wednesday saw England drop points for the first time in this World Cup qualification campaign, allowing Albania to cut their lead at the top of Group I to four points.

Southgate made 11 alterations in Poland as he reverted to the side that won so impressively Budapest, but the Three Lions boss surprisingly decided against making any substitutions.

Asked if he had been tempted to make changes in the final 10 minutes, the England boss said: “No, because we were in total control of the game.

“To bring players into that moment when everybody was performing to a good level and we were in control of possession, you can put players into the game who’ve had to sit in the stand and it’s not so easy to come in in those latter stages.

“There were a couple of times where we looked at it and said ‘no, they’re doing well, no problem’. We were going to refresh the wide players right at the end but really that would have been to run the clock down as much as anything.