Home Mediawatch England have seven CL finalists; what a ‘nightmare’ 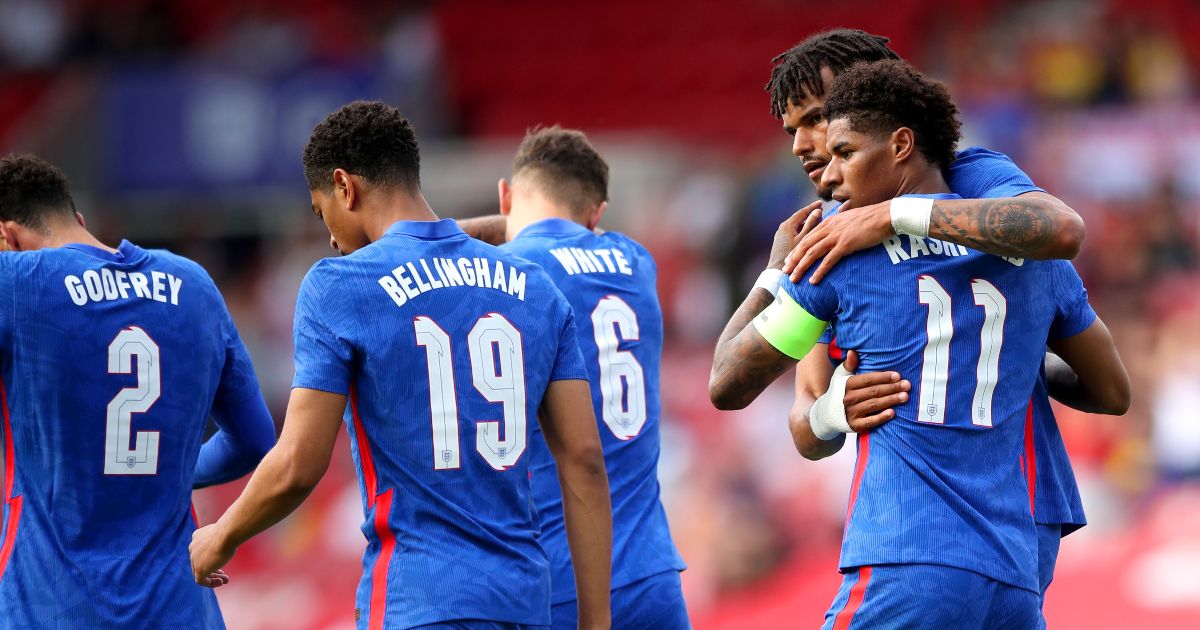 The Weeknd
You may remember Friday’s Mediawatch – well, of course you do – and our contention that The Sun basically tried to rule out both Harry Maguire and Jordan Henderson from the whole of Euro 2020 to fit their narrative of everything going to sh*t.

It was the ‘ENGLAND CROCKY HORROR SHOW’. It was ‘WOUNDED LIONS’. It was a ‘mounting England injury crisis’.

Three days later – after Henderson played 45 minutes of a pre-tournament friendly and Gareth Southgate gave a positive update on Harry Maguire which made a mockery of that bombastic back page – and we’re now here:

So from ‘it’s all going to sh*t’ to ‘we’re going to win the whole damned thing’ in three days in which a largely second-string England side beat Romania 1-0. Nice to see everybody keeping a keen sense of perspective.

I’m a creep; I’m a weirdo
The Sun‘s Dave Kidd did not get the memo that the paper were switching from ‘CROCKY HORROR SHOW’ to ‘IT’S COMING HOME’ as he is still channelling Steven ‘Chief Grumpypants’ Howard on the inside pages. Still sore at travelling all the way to Middlesbrough for a friendly, we see.

He is somehow annoyed that seven of the players who started a Champions League final nine days ago are central to England’s plans for Euro 2020 but have not yet played. And there really is nothing more annoying than England having talented, successful players who have featured on the greatest stage in club football.

‘England have had a nightmare build-up to Euro 2020′ is the online headline. Yes, winning two games 1-0 without the spine of their team really is the stuff of nightmares. Could it even get any worse?

‘Should Gareth Southgate elect for a back five, as seems likely, then all seven of England’s Champions League finalists – Reece James, Kyle Walker, John Stones, Ben Chilwell, Mason Mount, Phil Foden and Raheem Sterling – could start against Croatia at Wembley next Sunday.’

Indeed they could. Though it seems unlikely as Kieran Trippier appears to be England’s first-choice right wing-back. But we don’t want to spoil your narrative.

‘The advancement of Chelsea and Manchester City to that showpiece in Porto rendered these fixtures, against Austria and Romania, largely meaningless.’

So they should have just cancelled them? And left most of the squad without a game for three weeks? And will they still be ‘largely meaningless’ if Jack Grealish has played himself into the starting XI and Ben White has proven himself?

‘After Southgate had named four right-backs in his squad, he ended up playing Ben Godfrey, primarily a centre-back, at right-back against Romania. All very weird and while events have battered Southgate, he has lacked his usual clarity of thought these past couple of weeks.’

We’re not really sure how many times we can go over this. He picked four right-backs, lost one through injury, two more were unavailable because they arrived with England literally two days before, and the other started against Austria and is likely to start against Croatia this weekend. It’s not ‘weird’ that he then chose to play Godfrey; he didn’t really have much choice.

What’s really weird is this narrative that this is the ‘strangest’ of ‘nightmare build-ups’ to a tournament when England literally have seven Champions League finalists to come back into a team that is winning regardless.

Starter’s oders
In the Daily Mirror, John Cross is irked that it’s all not a lot clearer, illustrated by his point that James Ward-Prowse ‘has done enough to be given the spare space in the squad’ before talking himself out of it when he realises that might leave Tyrone Mings in defence and that simply won’t do.

But Cross is mostly irked that we don’t yet know England’s starting XI, writing that ‘with less than a week until the finals kick off, the Three Lions starting line-up is not known, nor is the formation Southgate will opt for’.

The important point here is that Southgate seems to know, saying after the game: “There’s probably one decision in my head, but we’ve got another week to get through.”

Mediawatch might be old-fashioned but we are fine with the actual England coach knowing before the press.

Be aware
This made us smirk in the Daily Mirror’s news piece after the ‘surprise’ call-up for Ben White that really did not surprise us in the slightest:

‘Gareth Southgate must be aware that Harry Maguire is a fitness doubt and also England look frail defensively so White gets the nod.’

Now that’s what we call inside information.

C-c-c-called a u-turn
Quite why anybody would care so deeply about the identity of the 26th man in a 26-man squad is a matter for another piece (ah, here it is) so Mediawatch is only really concerned with those who have made dramatic u-turns. So step forward Matt Law of the Daily Telegraph, taking a day off from an obsession with Tammy Abraham to tweet repeatedly about James Ward-Prowse.

Ward-Prowse has to take Trent Alexander-Arnold’s place and Gareth Southgate should be grateful he’s got another chance to get it right. Four right-backs and no Ward-Prowse with an injured Henderson was a mistake.

A mistake? And yet Matt Law himself picked his own seven players to drop from the original 33-man squad and included Ward-Prowse. Which is just delicious.

He also picked White to be dropped and then wrote that ‘injuries will play a big part and Harry Maguire’s fitness, in particular, could change the situation’.

Indeed. And so with centre-half Maguire not yet fit, the change to the situation should now be another central midfielder? Law really, really believes that…

A piece on why James Ward-Prowse has to take Trent Alexander-Arnold’s England place in Southgate’s Euros squad. https://t.co/1sLztqvcHs

Ben White added to the England squad. Well done to him but I think it’s madness that Ward-Prowse misses out essentially because Southgate has two players who aren’t properly fit in his squad. Maguire shouldn’t be in the squad given he’s just started running.

Madness? Would it not alternatively be ‘madness’ to find yourself with three fully fit specialist centre-halves and then not pick another when given the chance? It’s literally a week since Law seemingly thought exactly that.

Stuff of nightmares
Some people think Pep Guardiola has it easy at Manchester City but the Manchester Evening News is here to disavow you of this notion:

The ‘issue’ is that he would have to drop one of his midfielders. Now that is what we call a nightmare.