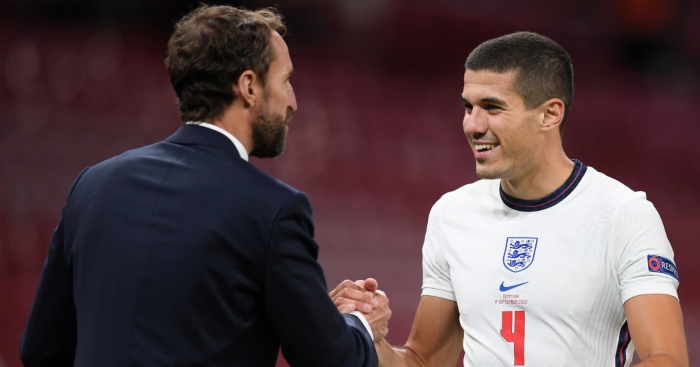 Gareth Southgate would have had no hesitation in handing Conor Coady the England captaincy from kick-off in the friendly win over Wales – despite it being just his second cap.

Wolves skipper Coady took the armband when Kieran Trippier was substituted in the second half of the 3-0 victory.

The 27-year-old also opened his goalscoring account for England on a memorable night for the former Liverpool youngster – who only made his senior international debut last month.

Not renowned for his prowess in the box, it was Coady’s first goal of any kind in 901 days as he turned home a Trippier free-kick at the back post.

Everybody Loves… football programmes – a memento to every matchday

He was not alone in being inexperienced at international level – Southgate’s starting line-up had just 54 caps between them as Dominic Calvert-Lewin scored on his debut and Danny Ings also got off the mark.

Asked about Coady after the game, Southgate enthused about the defender and his impact on the squad.

“Conor made me feel good sat next to me yesterday (at the pre-match press conference),” the England manager said.

“He’s got that real infectious personality. I know he doesn’t go up for set-plays for his club so I’m sure he’s enjoyed that moment.

“He’ll go back now and (Wolves boss) Nuno (Espirito Santo) will never hear the last of it. But it is very special for him.

“He ended up with the armband and I wouldn’t have hesitated to give it to him at the start but we felt Kieran is the most capped player and with everything he’s done for us warranted that accolade.”

Like much of Southgate’s team, Coady’s roots are in the EFL, having joined Wolves from Huddersfield in 2015 – when both sides were competing in the Sky Bet Championship.

Southgate acknowledged the role the EFL can have in giving young players a chance as several clubs below the top-flight continue to struggle financially following the ramifications of the coronavirus pandemic.

“We have always had that connection,” he said of England players who got their grounding in lower-league teams.

“Our back three at the World Cup were John Stones, Kyle Walker and Harry Maguire – two started at Sheffield United when they weren’t in the Premier League and Stones was at Barnsley.

“You could have gone through a lot of that squad in the same way, our pyramid is incredibly strong and very often the opportunity to play comes earlier for players who are in the Championship – particularly players at the back.

“We know how important that is, of course it is a very complicated time for everybody in regards to surviving this and, like every business, the clubs in the Football League have got a huge challenge but hopefully they are able to come through it.”