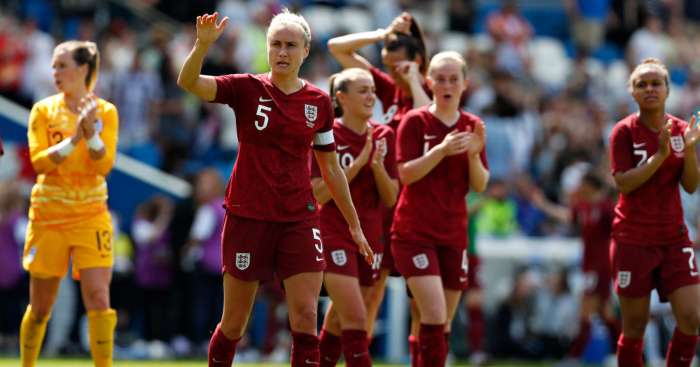 Individualised messages of support for each member of the England squad heading to this summer’s Women’s World Cup have been put on display across the country.

Messages for the 23-strong group written by friends, family members, teachers and coaches have appeared in locations special to each player, from where they grew up to the location of their current club.

The message for Lionesses captain Steph Houghton from her cousin Amy, which is on display on Albion Way in Salford, not far from the defender’s club Manchester City, reads: “From our local park – the Welfare – to the World Cup, you’ve done us proud. You are the most inspiring and resilient person and we love you so much. Good luck!”

The one for forward Toni Duggan, just outside Liverpool Lime Street station in her home town, is from the Barcelona player’s mother, reading: “Proud is an understatement! From a little girl in Everton to a name known worldwide, you are an inspiration! Everyone in Liverpool is willing you and the Lionesses to do well.”

When you have your own little billboard in your home city… Thank you Mum for the lovely words!! Time to fly to France & make you even more proud ✈️❤️😃 #BeReady @Lionesses pic.twitter.com/KrbfuNCcV2

Ahead of the squad flying to France on Tuesday afternoon, England boss Phil Neville said in a statement from the Football Association: “This is a great send-off for the team ahead of the World Cup and encapsulates the phenomenal support that they have received so far.

“The girls know that the country is fully behind them and can’t wait to get out there and give it everything.”

The tournament starts on Friday and England open their campaign two days later with a Group D clash against Scotland in Nice.