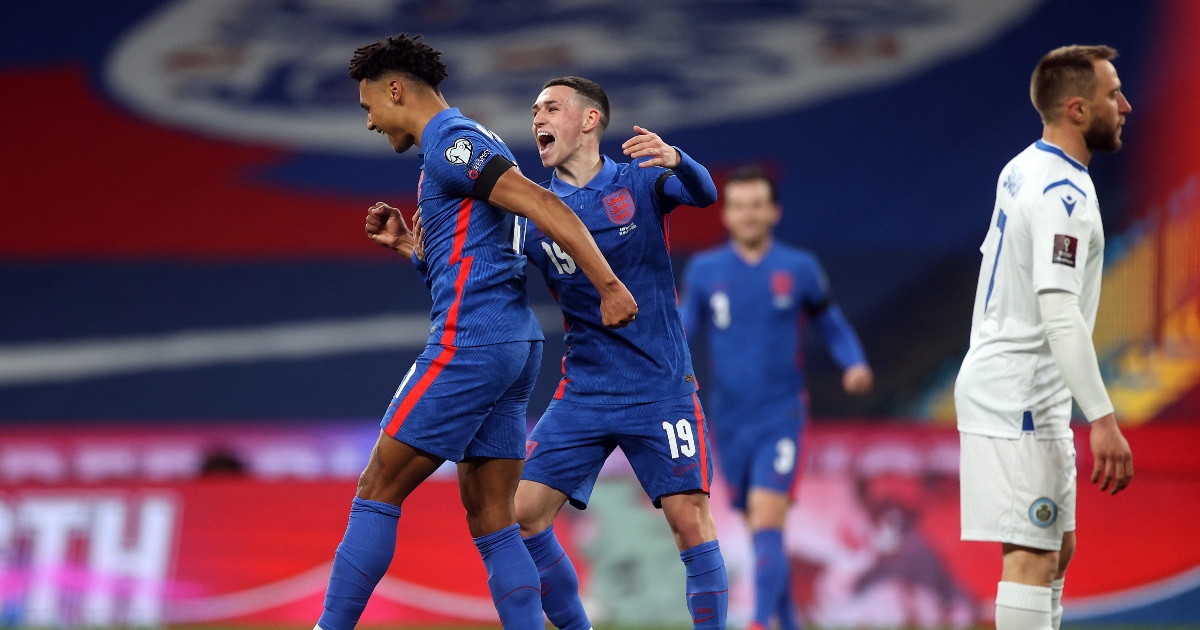 Ollie Watkins scored on his international debut as England cantered to victory against San Marino, but Gareth Southgate’s men should have made more of their dominance against the world’s worst side in this World Cup qualifier.

While a shot at European glory on home soil is just months away, the main focus right now is the road to Qatar and the 2018 semi-finalists took a simple first step towards next year’s tournament on Thursday.

It was always going to be a case of how many England would score against San Marino rather than the outcome at empty Wembley, where Southgate did not get the ruthless edge he called for despite running out 5-0 winners.

Southampton skipper James Ward-Prowse opened the scoring – and his international account – against the side ranked 210th and last in the world before Everton striker Dominic Calvert-Lewin headed home.

Raheem Sterling, captaining the side in the absence of the rested Harry Kane, added a deflected third, which would be all England managed in the first half despite getting away 22 shots.

Poor finishing and fine saves from inspired San Marino goalkeeper Elia Benedettini kept the scoreline down, just as it did in the second half.

Rejuvenated Jesse Lingard marked his international return with an assist for Calvert-Lewin, whose replacement Watkins coolly opened his own international account later on.

After days of discussions, England presented a unified front against discrimination by taking the knee before a match that saw Southgate – in his 50th game in charge – return to a four-man backline.

It was one-way traffic from the outset. Calvert-Lewin somehow failed to score a sixth-minute opener when failing to connect cleanly with a Reece James cross.

Lingard, winning his first cap since June 2019, was denied from 25 yards by a fine stop by Benedettini, who will have been as relieved as he was surprised when another returning player missed moments later.

England extended their advantage seven minutes later. James again showed his quality from out wide, swinging in a ball from the right that Calvert-Lewin headed home.

San Marino’s goal remained under attack but Benedettini was doing his utmost to keep the score down, superbly tipping over Chilwell’s long-range strike and then denying a dipping Mount effort.

Sterling sent a looping effort just off target as the England onslaught continued, with the stand-in skipper finally getting on the scoresheet in the 31st minute.

San Marino gave away possession attempting to play out from the back, with Mount taking the ball and Sterling firing home via a deflection off of Dante Rossi.

Lingard miscued after San Marino set up a rare counter-attacking opportunity and Benedettini came to the rescue to deny the West Ham loanee a fourth before half-time.

The hosts brought on Kieran Trippier, Tyrone Mings, Phil Foden and 17-year-old Jude Bellingham for the second half, which was just eight minutes old when they added a fourth.

Chilwell put Lingard behind the San Marino defence and the attacking midfielder put it on a plate for Calvert-Lewin to notch from close range.

Foden and Lingard had half-chances either side of Aston Villa striker Watkins coming on for his debut in place of Calvert-Lewin.

The Saints set-piece specialist looked set to grab his second of the night, only for the goalkeeper to tip his free-kick onto the post.

Benedettini would be beaten one more time as debutant Watkins brilliantly drove into the bottom corner in the 83rd minute.