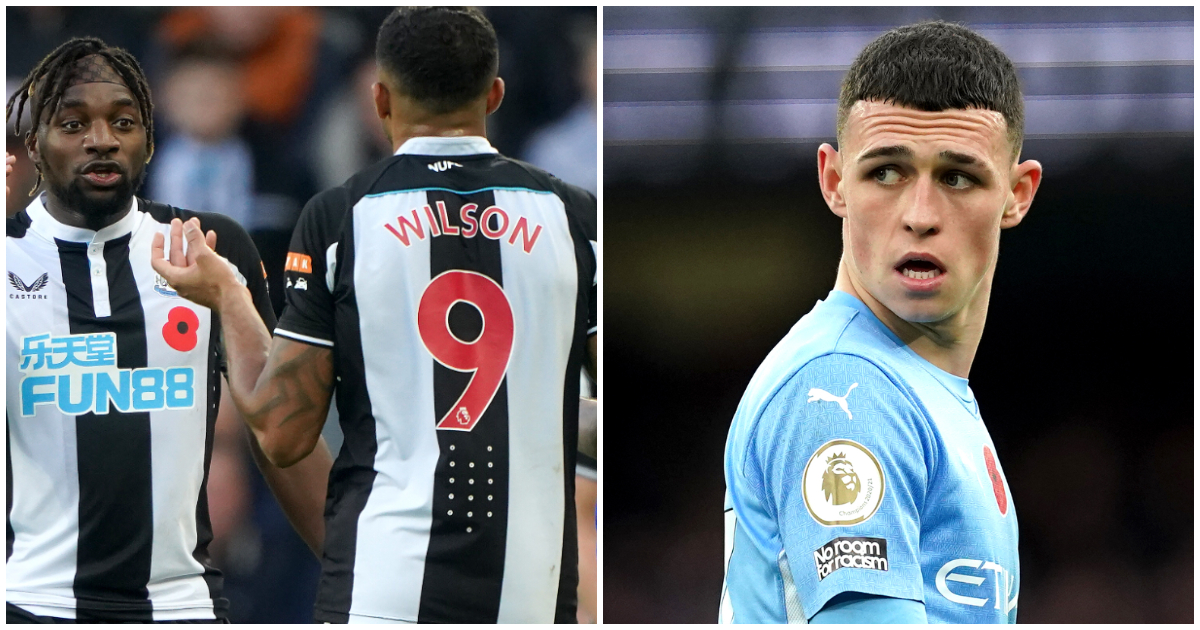 England forwards past and present misfired at the weekend, while a Spurs duo helped to get Nuno fired. We take the ratings from WhoScored…

GK: Karl Darlow – 5.21
It wasn’t a good weekend for Premier League goalkeepers. More than a third of those in action achieved a score lower than 6, with Darlow edging out Tim Krul in this XI. It was a bad time for the Newcastle keeper to under-perform, with Martin Dubravka looking on from the bench and ready to reclaim the Magpies’ gloves. Darlow stood no chance with Reece James’ brace but conceding a penalty for taking out Kai Havertz made sure he was the lowest-scoring stopper.

RB: Kyle Walker – 5.95
Walker’s only tangible contribution to the City effort was a single, solitary interception. No tackles, blocks, key passes, dribbles, shots or crosses – no accurate ones at least. Still, he was far from the worst City player…

CB: Aymeric Laporte – 4.15
No, that dubious honour belongs to Laporte, who self-destructed in the first half against Palace. The Spain centre-back’s sloppy pass allowed Palace to break and score their early opener before the French Spaniard came out second best in a challenge with Wilf Zaha that led to the defender’s dismissal.

CB: Ezri Konsa – 5.13
Konsa was also sent off but you could reasonably argue that he should not have been. Dean Smith certainly would. Konsa and Kortney Hause marshalled Michail Antonio well in the first half at Villa Park but West Ham still led 2-1 at the break. Within five minutes of the restart, both Villa centre-backs were the subjects of VAR checks for potential red cards. Hause escaped; Konsa did not.

LB: Ben Davies – 5.61
The Wales defender is only one of a couple of Spurs representatives after a performance that earned Nuno the sack. Davies struggled to deal with Aaron Wan-Bissaka, who usually requires a map and compass just to cross the halfway line. He also allowed Cristiano Ronaldo to drift off his shoulder for United’s opener.

CM: Oliver Skipp – 5.79
The Spurs midfielder never got to grips with Bruno Fernandes and it was his carelessness that allowed the United star to seize possession and start the move that led to Edinson Cavani scoring United’s crucial second. Skipp was hooked a few minutes later.

LM: Rico Henry – 5.89
Henry, playing as a left wing-back, wasn’t the lowest-scoring Bee at Burnley; Zanka rated at 5.86 but there were four Premier League centre-backs who stank more. Henry was culpable for Burnley’s second goal when he failed to jump with Matt Lowton.

RM: Sean Longstaff – 5.92
Remember when Newcastle wanted £50million from Man Utd for ‘the new Michael Carrick’? Good times. Maybe playing next to Toni Kroos will help him rediscover his mojo.

Fwd: Phil Foden – 5.93
Playing in the false 9 role, Foden had eight shots on Brighton’s goal last week. On Saturday, the England star managed not a single effort against Palace, with no dribbles and only one key pass. More than half of his nine crosses found a Palace defender while Foden lost possession 23 times.

Fwd: Jamie Vardy – 5.72
The Leicester striker, who scored 11 goals in 13 games against Arsenal prior to the weekend, was shackled expertly by the Gunners, with Takehiro Tomiyasu and Ben White combining to patrol the inside left channel where Vardy loves to prowl. The forward managed only a single shot off target while losing all five of his duels and surrendering possession seven times.

Fwd: Callum Wilson – 5.84
Andreas Christensen’s pocket must be getting overcrowded by now. Inevitably, Wilson was starved of service as the spearhead of one of the Premier League’s least creative attacks against the best defence but of only eight passes the former England striker attempted, half found a blue shirt.