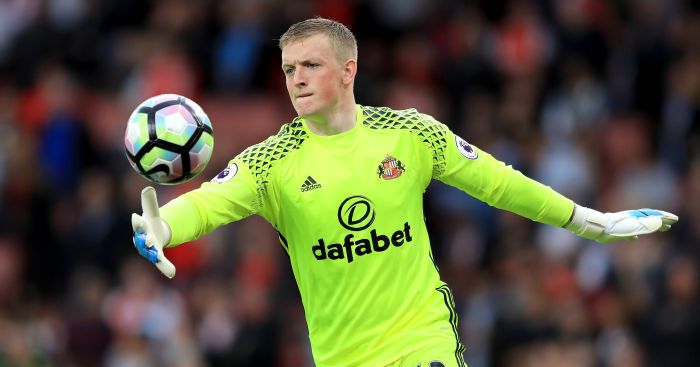 England Under-21 manager Aidy Boothroyd has backed Jordan Pickford to handle the spotlight after his £30 million move to Everton.

Goalkeeper Pickford had a medical in Poland as his big-money switch to Goodison Park from Sunderland was sealed on Thursday.

He is with the Young Lions preparing for their Euro 2017 opener against holders Sweden in Kielce on Friday, when all eyes will be on the 23-year-old who has become the third most expensive goalkeeper in the world.

Pickford was keen to leave any transfer business until after Euro 2017 but Boothroyd believes he will cope with the extra attention.

He said: “He is absolutely fine. I don’t think he even realises that he is going there.

“He is a coach’s dream. He is not bothered who is he playing for, he is not interested in price tags, all he wants to do is keep the ball out of the net and play football.

“He is just a really good, genuine kid who wants to do well. Like all goalkeepers, he is a little bit mad. He wants to throw himself around until he can hardly breathe.

“The way the game is, it is market forces. All I will say is that he is a very, very talented goalkeeper, technically and tactically. What I think he has got more than anything, which is a massive plus, is his mentality.

“Nothing seems to faze him. They have all been taking the mickey out of him, asking if they can borrow a few quid. He just smiles and gets on with it and wants to catch another ball. He is brilliant.

“It is one of those things. We are here at an international tournament but we are not going to say no to a club (coming over). We work together with the clubs.

“We have good relationships with them. And in this particular case, five of the (Under-20) World Cup winners came from Everton. That is the way that it works. We have to work together.”

Pickford is expected to start at the Kolporter Arena with England aiming to qualify from the group stages for the first time in three tournaments.

They lost 4-0 to Germany in the 2009 final but have since won just once – against Sweden in 2015 – in nine group games but Boothroyd insisted the Young Lions are ready to use previous failures positively.

He said: “We’ve been using that as a motivation. Nathan Redmond got into the team of the tournament last time but because we didn’t get out of the group everyone was disappointed and wanted to put it right.

“That’s great we have managed to qualify and get a second chance at it and we can go better this time.

“The first people we’ve got to prove it to is ourselves. We’ve done a good qualifying, good preparation leading up to it, good work with the clubs and managers and now it’s about making sure we do our bit. Great atmosphere, lovely weather, it’s brilliant.”

Senior boss Gareth Southgate will also travel to the game after starting the qualifying campaign as the Under-21 manager.

Boothroyd added: “He is very involved. I speak to him regularly. He will be coming out in the next few days to watch the game. He is the one who started all this work.

“He is now the national manager and he knows these players inside out. It helps me because there is a little bit of extra motivation there for them, not that they needed it.”