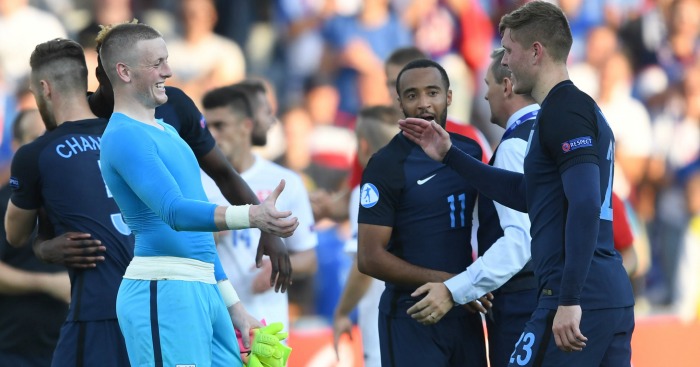 The Swansea centre-back scored his first goal for the Young Lions as England came from behind to beat Slovakia 2-1 on Monday.

They were close to an early exit after trailing to Martin Chrien’s opener but Mawson and Nathan Redmond scored inside 11 second-half minutes to win it.

England are now top of Group A – after hosts Poland drew 2-2 with Sweden – ahead of Thursday’s final game against Poland in Kielce.

He said: “It got a little bit heated, really. A lot of players were frustrated. I was so frustrated about the goal. But (manager) Aidy (Boothroyd) was calm and calmed everyone down.

“We said we needed to man up and do the right thing. Credit to us and we did what we needed to do. We don’t take it in a negative way.

“We are all men about it. We could have easily crumbled at 1-0 down but we stood up and passed it with flying colours.

“At 1-0 we just had to stick to the game plan. It was a sloppy goal. We were annoyed. I was so annoyed.

“We have worked hard on set pieces and winning the first ball and I wasn’t switched on. I want to defend more than they want to score.

“We are relieved. It is a night I won’t forget in a long time. The first goal for my country? Brilliant! It’s come a bit late but it has come. It’s a great feeling.”

This is how the #U21EURO Group A table looks after matchday two. A win for the #YoungLions on Thursday will see them into the semi-final. pic.twitter.com/lGRQ4RbrTa

Boothroyd’s half-time switch also paid off after he replaced Mason Holgate with Jacob Murphy, with the Norwich winger playing in an unfamiliar right-back role.

But Murphy set up Mawson’s leveller and Boothroyd admitted he had had to be brave with his changes.

He said: “That’s what I’m paid for. I have to make the decisions. Sometimes they work, sometimes they don’t. I thought if we lost or drew the game we were out.

“So we had to be bold, keep ourselves in the mix. We did that. Now we’ve put this to bed we’ve got a really tough game coming up against Poland.

“We want to progress, we want to do well. I thought we deserved our win. We were the best team.”