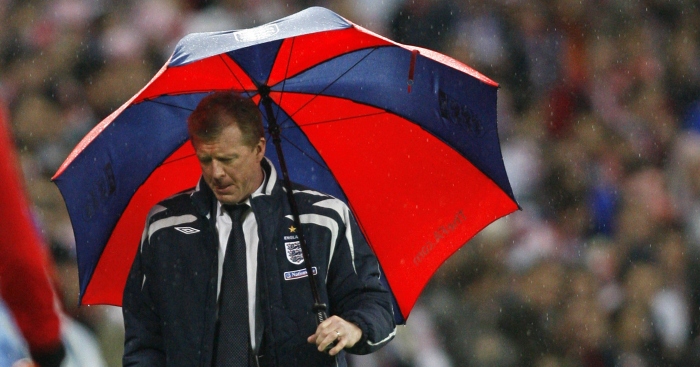 England’s 2-0 win against Sweden set up a semi-final showdown with Croatia at the Luzhniki Stadium in Moscow on Wednesday.

Here, we  look back at the two countries’ past five competitive meetings since Croatia gained diplomatic recognition by the United Nations in 1992.

June 21, 2004 – Euro 2004 group stage, Croatia 2 England 4
Wayne Rooney (who was excellent in that tournament) was given a standing ovation at the Luz Stadium in Lisbon as England booked a place in the Euro 2004 quarter-finals against hosts Portugal in style. Rooney, then 18, scored twice after setting up Paul Scholes for the equaliser before Frank Lampard added a late fourth in a Three Lions display which won lavish praise from the English media. England qualified for the knockout stages of the European Championship for the first time on foreign soil, but high expectation was followed by a crushing penalty shootout defeat to Cristiano Ronaldo’s Portugal in the last eight. Rooney was brilliant

October 11, 2006 – Euro 2008 qualifier, Croatia 2 England 0
Croatia exacted revenge with the help of goalkeeper Paul Robinson’s blunder by sending Steve McClaren’s England – playing an unfamiliar 3-5-2 – spinning to a dismal defeat in Zagreb. Robinson had made a string of fine saves to ensure the first half remained goalless as Croatia laid siege on the England goal before Eduardo headed the home side into a deserved 61st-minute lead. Eight minutes later Gary Neville’s back-pass bobbled up after hitting a divot on the six-yard line as Robinson went to clear and the goalkeeper watched in agony as the ball rolled in.

November 21, 2007 – Euro 2008 qualifier, England 2 Croatia 3
England’s failure to qualify for Euro 2008 was confirmed after another woeful display at Wembley, which earned McClaren his ‘Wally with the Brolly’ moniker and cost him his job. Croatia, full of verve and enterprise having already qualified, went 2-0 up inside 14 minutes after Scott Carson, who had replaced Robinson, fumbled Nico Kranjcar’s shot into the net and Ivica Olic slipped in a second. Frank Lampard pulled one back from the penalty spot in the second half and substitute David Beckham set up Peter Crouch for the equaliser, but Mladen Petric crashed home a 25-yard winner with 13 minutes left and England trudged off to a chorus of boos.

September 10, 2008 – World Cup qualifier, Croatia 1 England 4
This time it was England’s turn to gain sweet revenge as teenager Theo Walcott fired a brilliant hat-trick to inflict on Croatia their first home defeat in a competitive fixture. Walcott gave Fabio Capello’s England a half-time lead and drilled home a carbon-copy second in the 59th minute soon after Robert Kovac had been sent off for his elbow on Joe Cole. Wayne Rooney converted an excellent third goal for rampant England and after Mario Mandzukic had notched a consolation, Walcott completed his hat-trick.

September 9, 2009 – World Cup qualifier, England 5 Croatia 1
The Three Lions bandwagon under Capello rumbled on with a place at South Africa 2010 secured in emphatic fashion at Wembley with five qualifying matches still to play. Lampard, his first from the penalty spot, and Steven Gerrard both struck twice in either half and Eduardo’s token effort for Croatia was swiftly snuffed out when Rooney added a fifth. England had made huge strides under Capello and headed to South Africa with serious aspirations of making a big impact, while Croatia, a pale shadow of the side which had previously visited Wembley, failed to qualify.