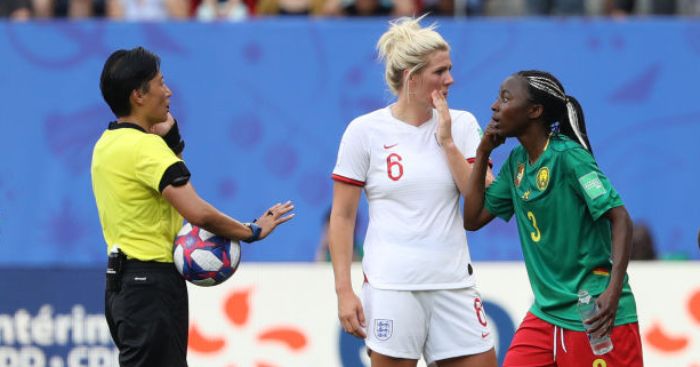 There was a moment midway through the first half that made the gap in quality feel like a chasm. England, already leading 1-0, had long established a headquarters on Cameroon’s right-hand side and were intent on holding meetings every couple of minutes.

This latest one was chaired by Jill Scott, who combined with Lucy Bronze and Nikita Parris for some tormenting passing triangles. The move’s conclusion, a wayward effort from Toni Duggan, did not match its fascinating introduction and gripping story body, but it neatly summed up proceedings to that point. Phil Neville’s side strolled from right to left as their opponents were left chasing shadows.

Few would have argued against an eventual 3-0 scoreline at that point. Steph Houghton’s indirect free-kick had given England their third 14th-minute lead of the tournament, Scott was dominant in the centre and Bronze and Ellen White were continuing their fine runs of form.

Is there anything better in life than a penalty area indirect free-kick?

Cameroon had offered little of note, aside from Yvonne Leuko’s yellow card for an elbow on Parris and Augustine Ejangue’s apparent spit at Duggan. Had the game continued as it started – as a football match – the Indomitable Lionesses would have been mauled by their namesakes. That it descended into theatre gave them an opportunity they failed to take.

It felt like typical commentary hyperbole when Jonathan Pearce stated how “fragile” England’s lead looked. A handful of stray passes had gone unpunished and Duggan’s attempt remained their last, but Cameroon had not had a shot on target of their own and were being held at arm’s length. Even as they left huge amounts of space in their own half that a better team – say, Norway – would have exploited, England were comfortable enough.

Then the touchpaper was lit. The indirect free-kick was contentious – it looked as though the defender had miscontrolled the ball rather than passing it back to the keeper – but this was something else altogether. As the game edged into first-half stoppage-time, Bronze’s excellent run and sumptuous pass found White, whose trademark finish doubled England’s lead.

Ever the pantomime villain, VAR was lurking in the background with one custard pie in hand for each of the actors and the audience. The goal went to review, White was clearly onside and the goal was allowed to stand.

It was the right decision; to broadcast the replay on the Stade du Hainaut’s big screen was less so. Much has been made of the importance of keeping supporters at the game involved and up to date in such situations, but making the right call in as little time as possible would prevent any issue. Fans would surely accept 30 seconds of obliviousness if the alternative is a couple of minutes of ignorance followed by mass confusion.

As the dejected Cameroon players looked up and saw a still picture of an England player standing offside when Bronze played the pass, they were incensed. It mattered not to them that the player in question was not even vaguely interfering with play; their sense of injustice had been legitimised. Their refusal to restart play was a pathetic tantrum allowed to fester by the inept refereeing of Qin Liang.

The delay early in the second half was mercifully shorter, but no less farcical. White’s goal had done nothing to settle England, instead giving them more room for complacency. Karen Bardsley’s poor clearance returned with a receipt, lacklustre defending failed to prevent the subsequent cross and Ajara Nchout’s finish was clinical.

Yet Gabrielle Onguene had been standing offside by the most slender of margins. Again, the destination was correct – the goal was ruled out – but the journey was laughable. It took four minutes for play to restart; an improvement on the unfathomable five-minute break Liang allowed earlier.

Alex Greenwood would add a third uncontested goal just before the hour was up, but England were merely weathering their own storm while VAR jumped the shark. A penalty should have been awarded for a trip on Fran Kirby with a quarter of an hour remaining and a red card given to Alexandra Takounda for a dreadful foul on Houghton, but it was decided that poking the bear was inadvisable. Two wrongs in this instance made not a right, but a list of officiating mistakes approaching double digits.

VAR itself was not the only issue. Liang’s implementation of the technology was woeful and she never had control of the game to lose it. But the elbow on Parris cannot go improperly punished and the potential spit on Duggan cannot go uninvestigated while two calls go nominally in favour of Cameroon for fear of upsetting them further. The referee did not help herself, nor was she ably assisted by VAR. The only result was petrol being poured on a raging fire.

It will distract from what Neville will justifiably see as a worrying trend. England loosened their own grip on a game once again and almost let it slip. Bardsley was rescued by VAR and the keeper in turn saved from Takounda after Greenwood’s poor back pass.

Their record is four wins from four, only the United States, Germany and Australia have scored more goals, and only Germany have conceded fewer. England still feel like favourites. But while Neville’s post-match declaration that this “didn’t feel like football” was more a comment on Cameroon’s behaviour, it was an apt description of the match itself. VAR and football have never seemed further from a happy union.