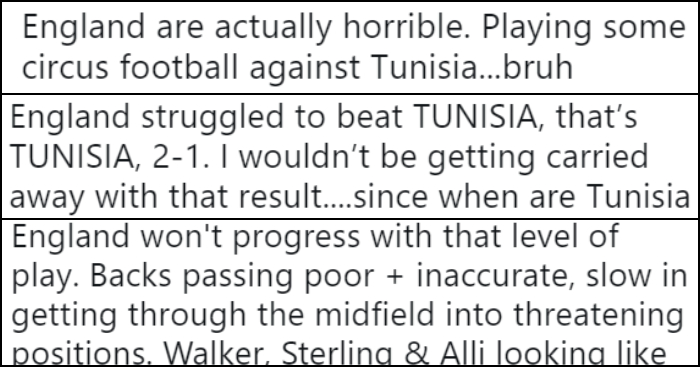 Obviously you cannot watch football objectively, especially if your nation’s team is playing, so everyone is always going to have a different view of a match; this is one of football’s eternal attractions. However, even against that background, the division between positive and negative views after England’s game against Tunisia was remarkable.

To some, England played well, kept playing to the last second and scored a late goal to win. Others saw it this way:

No mate they are garbage. Horrible football from a bog standard squad of players.

And that was not an unusual critique. I even saw someone complaining that scoring late showed how bad the side was! Now, I find that weird and bizarre. The hate directed at some players, Jordan Henderson especially, is also weird and bizarre.

So when I see weird and bizarre, I want to know why. Here’s what I think is going on.

This is all what I call the primacy of negativity, and it is a very modern thing. By primacy of negativity, I mean the speed, ease and volume of criticism of almost anything – football in this case – to the exclusion of any positive emotion. Only being negative matters. The delicate flower of niceness is crushed under the jackboot of misery.

Just look at Twitter during every game and you’ll always find the name of the co-comm trending, but not for good reasons. No-one is posting Tweets en masse about how wonderful anyone is. No. It’s about how awful whoever the co-comm is. That’s the primacy of negativity right there.

There are lots of things going on, I think. Firstly, being defensive and playing down joy is a way to not emotionally expose yourself. If you hate everything, the loss that love brings can never hurt you. Secondly, adopting a nuanced stance doesn’t play well to the masses. Saying something is rubbish gets more traction than saying something was quite enjoyable but neither brilliant nor awful. Those wishing to make their mark are sure, therefore, to adopt the position of maximum response..

And it goes deeper into England’s national psyche, I think. When it comes to international football, there is an ever-present cultural conflict. Being very pro-England, to some, means flags flying on your car, bed sheets hanging out of windows, and all the other white van man shaven-headed male cliche; it means the thick pink neck of Eng-er-lund. And let’s face it, many find those people to be What Is Wrong With Life.

That pushes those who find the whiff of such nasty nationalism too sulphurous away from taking a position which aligns itself too much with the oi oi saveloy brigade. And so such people veer away from positivity towards the team for fear of seeming like a fascist fool. The Cross of St George can have a divisive power.

But, just to confuse matters further, the Eng-er-lund brigade is also likely to be the team’s harshest critics, forever shouting about ‘pashun’ or the lack thereof, cluttering the airwaves with their taking-it-all-too-seriously wildly inaccurate notions drawn from the black lagoon of misinformation and downright ignorance.

And on a yet more deep, philosophical note, I think we live in an age where many people feel a quiet, existential, nameless, but disenfranchised anger at society and life, feeling they are just getting by, slaving their labour to worthless pricks who pick up big money for doing the square root of sod all. That rightly makes many bitter and a way to cope with that is to lay such bitterness off on the national football team as emblematic of the underserved rich. That’s why someone might call Jordan Henderson ‘horrible’.

England’s football team doesn’t provoke much rationality, but it does show Where We Are Now. And judging by Monday’s reaction, it doesn’t reflect a happy or proud country. Rather it reflects a country profoundly, emotionally, culturally and viscerally divided against itself in every way and on every level. And that is profoundly troubling. Maybe if England could be victorious it could heal the nation’s divides, at least for a few hours.