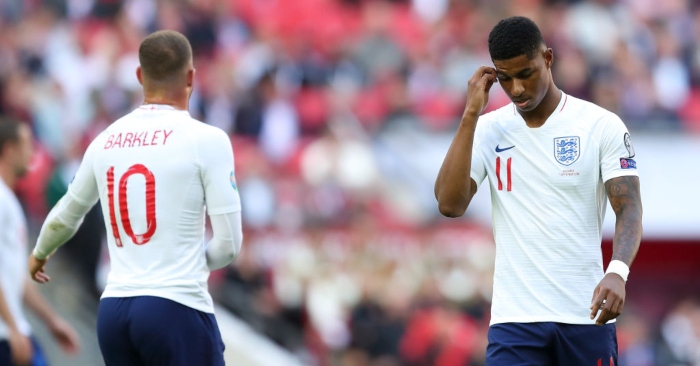 If you insist…
‘GARETH SOUTHGATE insists Marcus Rashford is not a No.9’ is inexplicably on the back page of the The Sun.

Why does he need to ‘insist’? Rashford is literally not a No. 9 (he has never worn the shirt in senior football) and he rarely plays as a No. 9 (he has started five games for club and country this season and only once was he a central striker. Oh and he was shit).

It’s a) really not a back-page story and b) really, really not controversial.

Oh and saying “I’m still not certain that is where he is happiest” is really more of a ‘muse’ than an ‘insist’.

No. 9 dream
That story appears on the internet with the headline of ‘Gareth Southgate says ‘work in progress’ Marcus Rashford is not a striker despite leading the line for Man Utd’. Of course it does.

And Neil Ashton writes: ‘Rashford has played up front for United at times this season since Romelu Lukaku’s Inter Milan move.’

‘At times’ is excellent; he played there once when Anthony Martial was injured.

What’s in a number?
And all that musing does not end there, with the Daily Mail’s ‘THE VERDICT’ pull-out asking:

‘CAN RASHFORD EVER BE ENGLAND’S No 9?’

As tempting as it is to just say ‘probably not, no’ and move on, Mediawatch is intrigued by this idea that we should try and shoehorn a 21-year-old man who plays largely left of centre for both club and country into the striker’s position when we already have one of the world’s best strikers playing for England. And at the age of 26, Harry Kane is unlikely to shuffle off soon. Why do we need Rashford to be a No. 9? Why would we put unnecessary pressure on a young man who is playing quite well as a No. 11, thank you?

The answer is of course that England won 4-0 so the press have got to find some negativity, some controversy somewhere.

So that is how Martin Samuel begins his ‘match report’ from Wembley:

‘WITH three minutes remaining, Marcus Rashford played a lovely one-two with Alex Oxlade-Chamberlain and was left with only goalkeeper Plamen Iliev to beat. He did not score.’

And it didn’t matter because England were 4-0 up. So why are we talking about whether Rashford can play in a position that is currently occupied?

‘It is certainly not the way Gareth Southgate sees him, and not just because Kane is the obvious central striking option.

‘Even were Kane unavailable, is it possible Southgate would now seek alternates and keep Rashford in his wide role? The way he spoke of him on Saturday suggested he had changed his mind since preferring Rashford against Holland in the summer, when Kane had recently returned from injury.’

It suggested nothing of the bloody sort. This is what Southgate actually said:

“He isn’t as strong as Harry with his back to goal and holding play up, so if he plays at nine, he will do it differently.

“I don’t think that’s a problem, we just have to be aware that this is probably his profile.”

What he clearly says is that he could play as a No.9 but would play differently to England’s actual No. 9. Which is not a problem to anybody but an English press that is bizarrely obsessed with Rashford becoming the new Kane even while Kane is still on the throne.

Jigsaw puzzle
‘ENGLAND’S MISSING PIECE’ is the headline on the front page of the Mirror Football, which sounds unnecessarily harsh on the back of a 4-0 win.

But then we turn to pages 2 and 3 only to find that Southgate is not the one who is unconvinced by his creative midfield options – in fact, he says “we’ve got strength in depth, real competition, and we’re fascinated to see who’s going to impress”, which sounds awfully like he is happy and not really ‘searching’ at all.

No, it’s Mirror writer John Cross who has his doubts, writing:

‘But if there is one area of concern, where England are still lacking, then it has to be in central midfield as, no matter what formation Southgate plays, there are still big question marks.

‘It was a year ago this weekend that Southgate lamented the lack of a Paul Gascoigne to give England some creativity after being given a midfield masterclass by Thiago Alcantara, Sergio Busquets and Saul Niguez when Spain won at Wembley.

‘Twelve months later, England are still looking for that player to step out of the shadows.’

Are they still waiting? Or has Ross Barkley started six of England’s nine internationals since those September games when Southgate lamented his lack of a creative midfielder? Can you simultaneously be ‘in the shadows’ and yet pretty much a shoo-in to start every game? Is that possible?

At the very least, taking him out of that jigsaw picture shows a complete lack of respect for a player who played more minutes for his country last season than all but four of his teammates from Saturday.

‘Jordan Henderson is arguably the only player to have one of those midfield slots nailed down and, after helping Liverpool win the European Cup, no-one should doubt his pedigree.’

Well, Jordan Henderson has only started three of England’s last nine internationals, but carry on…

‘But it is not about Henderson. It is about that player who can provide the vision, the through ball and also the shield who can protect the back four but also not give the ball away.

‘Declan Rice has shown huge promise as the anchorman and was efficient against Bulgaria while Ross Barkley made some good dribbles and surging runs from midfield but there will be far bigger tests ahead.’

‘Made some good dribbles and surging runs from midfield’. And also created four chances for his teammates, more than any other England player. But that’s not good enough for Cross; he wants alternatives.

‘Harry Winks is going from strength to strength for Tottenham and can play that role.’

Can he? He certainly doesn’t right now.

‘Mason Mount has been outstanding since stepping up for Chelsea and in training after joining up with England’s senior squad.’

Yes, though it’s worth noting that Mount creates fewer chances per 90 minutes than his teammate Barkley, who actually leads the pack in terms of English midfielders in the Premier League.

So perhaps that’s why Southgate keeps picking the Chelsea man, despite attempts to airbrush him completely out of an England team in which he has rather sneakily established himself.

Crisis time
‘Chelsea are just two points off the relegation zone with just one win so far’ – The Sun.

Chelsea are just two points off the Champions League places with just one defeat so far’ – Mediawatch.