Home Mediawatch England out of World Cup because of ‘barmy’ lefties?! 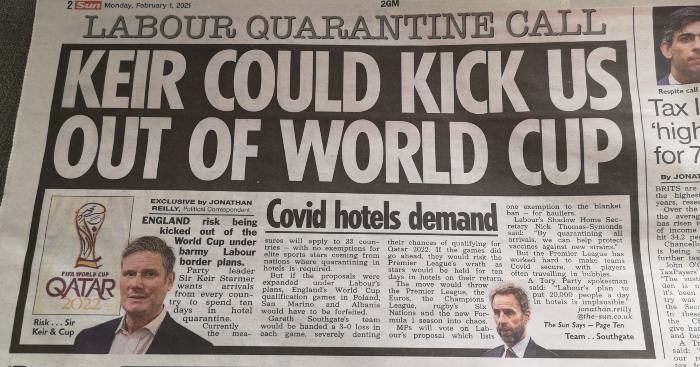 Barmy army
There’s only one thing barmy – who says ‘barmy’ outside the confines of a tabloid newspaper? – about The Sun‘s ‘England risk being kicked out of the World Cup under barmy Labour border plans’ story, and that is the fact that this story was ever written at all.

Using football as a means to kick a political party not in power is low even for The Sun, who ignore all the gaping holes in this story by announcing – exclusively, no less – that ‘ENGLAND risk being kicked out of the World Cup under barmy Labour border plans’.

If you are not familiar with these ‘barmy Labour border plans’ then the upshot is this: Labour believe that there are “gaping holes” in the quarantine plans and have suggested that all arrivals into the UK are subject to quarantine. There is some merit in this argument.

Obviously, only a short hop, skip and a jump from an opposition party opinion is England’s football team being kicked out of the World Cup. It’s a connection anybody could have made, but particular a right-wing media attempting to discredit an opposition party at a time when the ruling party are mis-managing a pandemic.

Mediawatch does not pretend to be an expert on political process but we are not sure Labour can have ‘plans’ while they are not in power. They have objections and they can have proposals, but the likelihood of these becoming law are slim. Which means that the likelihood of England being thrown out of the World Cup is close to zero.

Indeed, a quick look on Sky News reveals this:

‘Labour will hold a debate on the border measures, although the intricacies of parliamentary procedure mean a vote will not necessarily follow.

‘The outcome of any vote is also not binding on the government.’

And if by some miracle, the plans are voted on and ratified, will England be thrown out of the World Cup because we cannot fulfil fixtures? Is there no chance of exemptions for elite sportsmen? Thankfully The Sun have asked Labour and got this response:

“Labour’s proposals outlined do include scope for exemptions, we have asked the Government to provide all of the basis or the decisions around exemptions.

“Every effort should be made to allow elite international sport to continue, through quarantine exemption, although the key priority has to be against importing a strain of the virus that is resistant to the vaccine.”

Still, those barmy lefties are definitely going to get England thrown out of the World Cup. We call treason.

Bale out
Jose Mourinho will be very happy indeed to see the back page of The Sun on Monday morning. His team produced one of the worst Tottenham performances of the last decade at Brighton and what is their opening line?

Alternatively, JOSE MOURINHO’S hopes of still being Tottenham manager next season took another major hit. But you will not find that opening line in the pages of a newspaper that would happily give Mr Headline a job for life. So let’s blame it on Bale. All that’s missing is a weak jibe about golf.

The line about ‘time running out for the 31-year-old to convince Mourinho to extend his Spurs stay for next season’ particularly stood out; what price neither are anywhere near Spurs in 2022?

Kane and unable
The frequency with which the tabloids utterly misjudge the mood around football is extraordinary, with the Daily Mirror‘s Tottenham match report focused entirely on the absence of Harry Kane, as if one of the most experienced coaches in football could not have found a way to beat the 17th best team in the country without one of their strikers.

‘JOSE MOURINHO finished with five forwards on the pitch last night, but not one of them could fill the scoring boots of Harry Kane.’

‘Carlos Vinicius, Lucas Moura and Erik Lamela were all thrown on but no one could replace talisman Kane’s finished or underrated creativity.’

Well no. And what more could serial winner Mourinho possibly do? Apart from not fall out with everyone perhaps.

Pottering around with Frank Lampard
The headline is about Frank Lampard but the majority of Ian Ladyman’s Daily Mail column is actually about Graham Potter. The message seems to be that Potter has been given time and control at Brighton and Lampard was never given the same at Chelsea. Presumably because one of those clubs is Brighton and the other is Chelsea.

We are told that Potter ‘knew the rules before he took the job in a way that Frank Lampard maybe did not at Chelsea’. Well if former Chelsea stalwart Lampard did not ‘know the rules’ at Chelsea, then we are not sure who would. Indeed, you might argue that ‘knowing Chelsea’ was pretty much the only thing on his CV.

‘By the time he arrived on Brighton’s doorstep in the Premier League, he had been a manager for eight years.

‘He had made most of his mistakes when nobody was looking. He knew exactly who he was and what he wanted.

‘Potter managed to do that. Maybe Lampard did not.’

Potter ‘managed to do that’ because he had earned a chance at Brighton by being excellent at Ostersund and Swansea; his was a merited appointment. The idea that Lampard ‘chose’ his owners at Chelsea is laughable as literally no other club in the Premier League – Brighton included – would have given him a job on the basis of his work at Derby. And having been handed that unmerited job, Lampard absolutely knew how it would end if he did not retain the standards set before him.

Can we move on now?