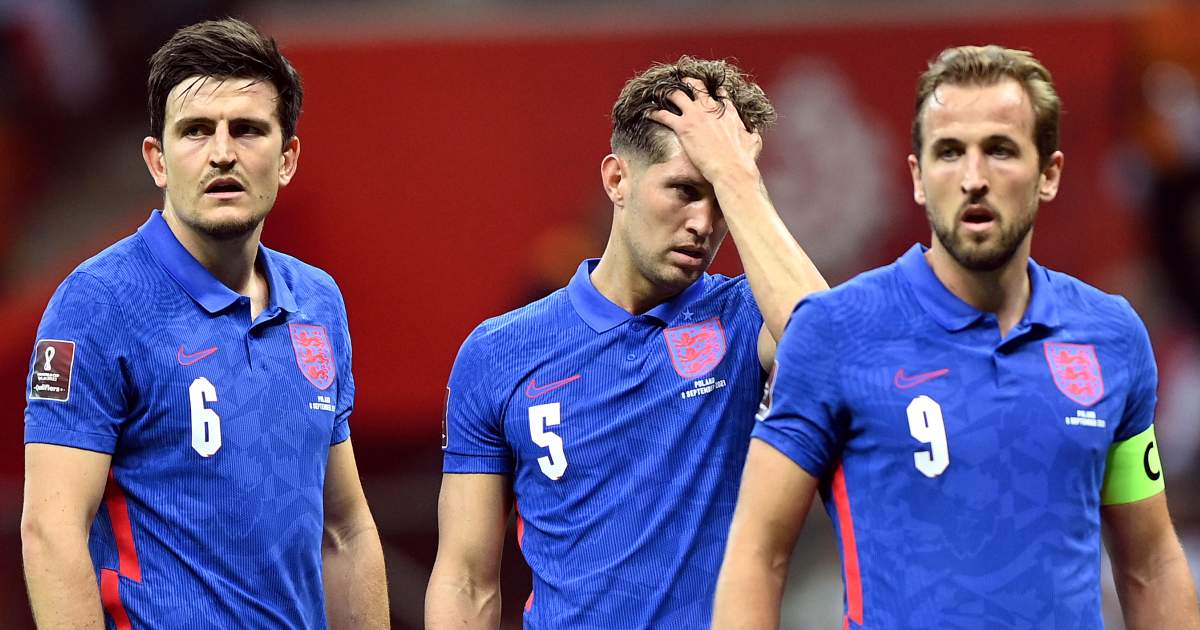 A lot has changed since April and the last pre-Euros ladder. England have been to a major final and tightened their grip on World Cup qualification.

There is also currently a pretty clear first XI that looks to have most bases covered, so expect that to look ridiculous by the end of the next international break.

1 (1) Harry Kane
Absolutely nowhere near his best yet still extended his goalscoring run in Euro and World Cup qualifiers to 15 consecutive games with three in three including a long-range stonker against Poland and the obligatory stat-padding penalty against Andorra. Now just 12 behind Wayne Rooney’s all-time England record. He could very easily knock that off by the World Cup; either way it’s now (ankles caveat notwithstanding) a question of when and by how far he smashes that record rather than if. An absurd footballer with an absurd record and a terrible agent.

2 (2) Harry Maguire
Less than a year ago he was plummeting down these rankings after his Greek adventures and a nightmarish ‘performance’ against Denmark in which his red card after half an hour was something of a mercy killing. Now just barely kept off top spot only by the man on course to smash all the country’s major goalscoring records. Turns out Ol’ Slabhead is absolutely brilliant.

3 (3) Raheem Sterling
Not quite at his best against Poland but that opening goal against Hungary was more important than the final scoreline made it look. Still in bags of credit from the summer, obviously, and was already very much a Southgate favourite long before then.

4 (7) John Stones
More remarkable even than Maguire’s renaissance in many ways. Hard to imagine anyone other than Stones and Maguire as England’s starting centre-backs now, yet it really is less than a year since it was perfectly plausible to think they were both behind Eric Dier in the pecking order.

5 (4) Declan Rice
Falls only because of the excellence of Stones. In terms of his own position, continues to do nothing but strengthen his hold on a first-team spot. That he is five or six or seven or whatever in this list is no slight. He could be number one in another time and be less secure than he is. This is a good thing. Rice as low as five is testament to England being a really excellent team these days.

6 (14) Kalvin Phillips
And much the same applies to England’s player of the year. Didn’t cover himself in glory for Poland’s late equaliser and Southgate might wish he’d brought Jude Bellingham rather than nobody off the bench. But it’s been a remarkable 12 months for Phillips, a man who hadn’t played a Premier League game and had just made his debut this time last year.

7 (5) Mason Mount
A Southgate favourite who is now more widely appreciated. A familiar tale. Encouraging early signs that his link-up play with Jack Grealish could be honed into a very useful tool to unpick packed defences.

8 (8) Jordan Pickford
Makes very few mistakes for England and seems to get away with those he does make. Neither of these things happen for Everton, but that matters not for our purposes.

9 (19) Luke Shaw
Seems to have now so thoroughly won the left-back battle that his major rivals are in fact right-backs.

10 (15) Jack Grealish
Along with Kyle Walker probably the only person in the first XI you couldn’t pencil in with absolute confidence for the opening game of Qatar 2022.

11 (9) Kyle Walker
Still appears to be Southgate’s first among equals at right-back but didn’t have the very best of international breaks here and there is an awful lot of competition for the 31-year-old’s spot given the calibre of England’s right-backs and Southgate’s general fondness for them.

12 (29) Jude Bellingham
While it is Walker whose hold on a first XI spot appears shakiest, it is the Phillips-Rice axis coming under greatest pressure from outside because Bellingham is really, really, really good.

13 (16) Kieran Trippier
Second-choice right-back and quite possibly second-choice left-back as well because Ben Chilwell has displeased the master.

14 (21) Reece James
Third-choice right-back would normally be a dicey spot for getting into a squad. Not for James, not for Southgate, not for England, whose second-string team against Andorra featured three right-backs because of course it did.

15 (20) Tyrone Mings
Appears to be third choice centre-back, well behind the first two, just ahead of Conor Coady and miles clear of everyone else.

16 (18) Conor Coady
Appears to be fourth choice centre-back, well behind the first two, just behind Tyrone Mings and miles clear of everyone else.

18 (17) Dominic Calvert-Lewin
Patrick Bamford didn’t exactly grab his chance against Andorra so the Everton man very much remains the Other Striker in a full-strength squad.

19 (30) Sam Johnstone
Started in the ‘reserve’ team against Andorra and got the No. 13 shirt for the others while Nick Pope had the 22. These are pretty clear hints that the West Brom man currently sits above Pope in the pecking order. We’re just not sure where either sit in relation to all the other keepers (apart from Pickford, obviously).

20 (23) Bukayo Saka
If you didn’t enjoy his goal against Andorra then you don’t have blood in your veins. Combination of talent and versatility making him a squad cert even if his exact route into the first XI is harder to plot.

21 (24) Jadon Sancho
Still not quite happened for Sancho at international level but any success at all at Manchester United is going to keep him in everyone’s mind, unlike accomplishments off in faraway Dortmund.

22 (11) Nick Pope
A clear number two before injury ruled him out of the Euros and now things look a little less certain for the Burnley keeper. With Johnstone preferred this week, Dean Henderson lurking and Aaron Ramsdale’s profile high after a big-money move to Arsenal it looks a bit dicey. Still in the 23, but precarious. And not really his fault, to be fair.

23 (6) Jordan Henderson
The vice-captain’s grip on a place in the squad is certainly loosening. He was in our top six in April; five months is a long time. The Phillips/Rice Axis is cemented now, and Henderson this week admitted Bellingham is “miles ahead of me when I was that age”. He is also ahead of him in the here and now.

24 (25) Jesse Lingard
He played. He scored. Though he probably needs to leave Manchester United to make all that happen again.

25 (27) Trent Alexander-Arnold
Who even knows? Fundamentally too good a footballer with too high a profile to drift far out of the reckoning but he’s nowhere near Southgate’s first XI. Only Southgate could get four right-backs into a 23-man squad and only TAA has the ability to make that not mental. It’s a perfect combination. In a way.

26 (13) Marcus Rashford
The campaigning sports star has seen his profile rise even further this week despite not being in the current squad. The worry is that there just isn’t really an obvious spot for him in this England team now. He seems like a great bloke, but does the England football squad really need a lock or blindside flanker?

27 (10) Ben Chilwell
Suddenly and dramatically out of favour for club and country. Yet to make it on to the pitch in the Premier League this season and now behind not only Luke Shaw but also at least one right-back as England left-back. It’s odd, but it’s happened. Could Southgate really end up with a squad containing three or four right-backs and only one left-back? Yes, we rather think he could.

28 (41) Mason Greenwood
An early-season bolter thanks to a flying start to the season for Manchester United. Much will now rest on whether the Great Return helps or hinders the teenager. If the next year goes well he’s going to be utterly unignorable.

29 (35) Patrick Bamford
A call-up and a cap confirms he is in the manager’s thoughts. Harsh truth is that he needed to do more in a kindly fixture. Rueful smile on the bench when Harry Kane came on and immediately had a penalty to convert said a lot.

30 (NE) Ben White
Not even ahead of Phil Neville as recently as April, now a Euros runner-up and a £50m man.

31 (34) Danny Ings
Could definitely get himself back into the reckoning because the Villa move looks a shrewd one, but for now what we said in April still applies: ‘It’s Harry Kane +1 and he is not the 1 as it stands.’

33 (28) Michael Keane
Just seems to have been… forgotten about. We nearly did too.

34 (38) Tammy Abraham
‘Desperately needs a move this summer; he won’t get the football he needs at Chelsea’ was April’s assessment. Move secured, and now we wait.

35 (49) Aaron Ramsdale
Joining Arsenal was either very clever or very stupid. In essence there are four keepers competing for two spots in the squad and it could be any combination really.

36 (RE) Dele Alli
We’ve been burned before by Dele at international level, where he flattered to deceive too often even when his Spurs form was at its absolute peak. But Southgate can’t fail to have noticed that Dele is playing with renewed confidence under a manager who doesn’t belittle him every day and also – perhaps more importantly – never before seen maturity and responsibility and tactical discipline in a deeper role just in front of a double-six pairing of Pierre-Emile Hojbjerg and Oliver Skipp. There was no way back into the England set-up for Dele as a mercurial number 10, but as a number eight, who knows…

37 (NE) Eberechi Eze
Was set to be named in Southgate’s 33-man provisional Euro squad before suffering that Achilles injury in May. Reports suggest his return to fitness is ahead of the initial six-month schedule, so plenty of time to play his way back into Southgate’s thoughts in what is now an altogether more proactive and exciting Palace side than the one he knew.

38 (32) Ollie Watkins
One cap, one goal but suddenly there seem to be rather more obstacles in his path at both club and country. ‘He will be hoping he is more Kane than Nugent,’ we said in April. Time on his side, of course, but it’s looking distinctly Nugent.

39 (26) Eric Dier
Three excellent performances in a row for Spurs, three clean sheets, and a player of the month nomination. Could all depend on whether the Euros squad has now entirely usurped the 2018 World Cup squad in Gareth’s loyalty rankings, but we can’t shake the thought that any injury to any of the four definitely ahead of Dier will tempt Southgate back to an old and in-form favourite.