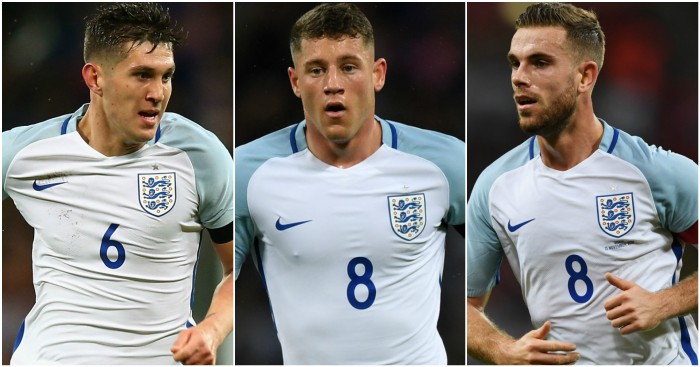 GK: Joe Hart
England’s No.1 has had a disappointing couple of seasons which sandwiched a dreadful Euro 2016. Luckily for Hart, he had enough credit in the bank and little credible competition for the jersey on a long-term basis.

Now, that has all changed. Jack Butland’s return to fitness and Jordan Pickford’s Everton switch means Gareth Southgate is likely to have a couple of viable alternatives should Hart’s form not improve from his underwhelming spell at Torino, whose president admitted that he “did not expect so many mistakes from an England goalkeeper”.

RB: Nathaniel Clyne
The Liverpool full-back amassed more minutes than any of his team-mates last season, but it was a case of quantity rather than quality for Clyne. He was solid defensively but underwhelming going forward.

Not only does he face competition at club level from Trent Alexander-Arnold and Jon Flanagan, Kyle Walker will be flying up and down the right for Manchester City in a bid to cement his England place and Tottenham’s Kieran Trippier will be looking to catch the eye too. If Clyne stands any chance of making Southgate’s first XI, he needs to match last season’s consistency of selection at club level with an improvement in performance.

CB: Chris Smalling
As it stands, Smalling, John Stones and Gary Cahill are competing for two places, while a decent season in Everton’s defence for Michael Keane could cause problems for the two Manchester-based centre-halves if they don’t up their game.

Smalling’s is a curious case. Last year he went from being one of the first names on the Man Utd team-sheet at the start of last season to being linked with West Brom by the end of it. In theory, a partnership with Stones should work: Smalling bringing the fight and Stones the finesse. But Smalling has to see off the challenge of United new boy Victor Lindelof and secure his place in Mourinho’s side before he worries too much about Southgate’s thoughts.

CB: John Stones
The former Barnsley centre-half has had a season to settle at Man City and now needs to demonstrate why Pep Guardiola paid silly money when £50million was still classed a such.

The 23-year-old suffered for the lack of a regular, reliable partner at City, and why Guardiola isn’t among the managers looking at Virgil van Dyke to pair with Stones is something of a mystery. It’s the title or nothing for the City boss this term, and Stones’ form will go a long way to deciding their success. The bi-product of that for the defender should be a starting place in Russia.

LB: Luke Shaw
It’s hard to envisage how last season could have gone any worse for Shaw. Mourinho questioned his mentality and physicality as the manager took a tough love approach to the task of getting something close to the best out of the 22-year-old. “I’ll prove you wrong,” is what Shaw is said to have told Mourinho in April after it was doubted whether the left-back had it in him, and the manager is supposed to have been impressed at the improvement in the defender’s attitude. Maybe not impressed enough to drop his interest in Danny Rose, but it was a start.

Shaw has a long way still to go. Getting fit would represent simple progress and staying that way would be an even bigger step in the right direction. Earning Mourinho’s trust must be his first objective before considering his international prospects. Seven minutes’ England action in two years has seen Rose and Ryan Bertrand jump ahead of Shaw in the Three Lions pecking order, but Southgate and everyone else knows what the United defender is capable of, if only he can show it.

M: Jordan Henderson
The Liverpool captain had started every England game after Euro 2016 until his season was curtailed by a foot injury. And that’s the obstacle Henderson has to overcome this term: avoiding injury.

Sir Alex Ferguson’s suggestion that Man Utd were put off buying Henderson because they feared his running style could cause him injury problems later in his career was widely scoffed at, especially after the former Sunderland midfielder managed an average of 35 Premier League games in his first four season after moving to Anfield. But half that number in 2015/16 followed by 24 appearances last term lend some credence to Ferguson’s theory. Henderson has to allay those fitness concerns this term and prove he can be relied upon.

M: Alex Oxlade-Chamberlain
The Arsenal star admits he was given “a wake-up call” at the start of last season when he was left out of Sam Allardyce’s only squad after missing Euro 2016 through injury. Oxlade-Chamberlain says his international career has been “in two halves… I’m starting the second part of it,” in which case, a season of consistency in form and fitness is required, wherever he finds himself come the end of the transfer window.

Oxlade-Chamberlain could also do with dropping the utility man tag. It may be a blessing when it comes to being named in the squad but if he wants to nail down a regular place in Southgate’s team, then it would benefit everyone if it was decided in what position his future lies. Whether that is possible while he is an Arsenal player, it remains to be seen.

M: Ross Barkley
Barkley’s England career has hit the skids having not made an appearance since the pre-Euro 2016 friendlies, while the Everton midfielder has been omitted from the squad for seven of the nine games since he went to France last summer and watched from the sidelines as his team-mates flopped spectacularly.

The only way Barkley will reverse that slide is to prove himself at club level. But doubts persist there too. Everton boss Ronald Koeman has shown he has little patience with him, while the 23-year-old appears to be doing his best to price himself out of a move to Tottenham. Whoever employs him next season, the midfielder, once viewed as one of the nation’s best prospects, needs to get his head down and perform consistently.

F: Wayne Rooney
Rooney insists he hasn’t given up on resurrecting his England career, but the former captain needs to show the kind of form that few truly believe he has left in him.

F: Jamie Vardy
Vardy is the second-highest English goalscorer since 2014, way behind Harry Kane, but with a comfortable enough gap between himself and Jermain Defoe to think of himself as worthy of a place in Southgate’s current squad.

But his form from Leicester’s title winning season won’t carry him all the way to Russia next summer, and this season, Defoe won’t be playing in the division’s worst team. Marcus Rashford also has eyes on one of the centre-forward spot, so Vardy needs an improvement on the 13 goals he notched in the Premier League last term.