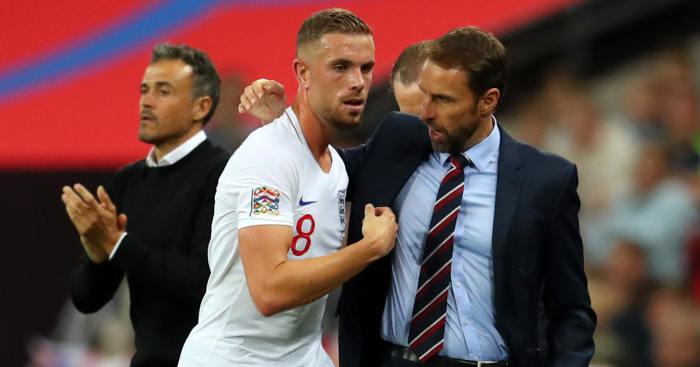 Jordan Henderson insists England manager Gareth Southgate has never got angry at his players – and they do not intend on that changing after the crunch Nations League clash with Croatia.

The Three Lions face their World Cup semi-final opponents for the third time this year, looking to exact a measure of revenge after being eliminated in Russia.

A 0-0 Nations League draw behind closed doors is Rijeka last month was followed by a 3-2 victory against Spain as England turned their fortunes in the new tournament around.

After Croatia beat Spain by the same scoreline on Thursday night, the winner of Sunday’s meeting at Wembley will advance into the finals of the Nations League – while the losers will be relegated.

Southgate’s side prepared for the match with a 3-0 friendly win over the United States, an occasion used to honour Wayne Rooney’s record-breaking England career.

Despite the victory, Southgate was unhappy with how open his side were in the closing stages but said he did not raise the concern after the game given Rooney had delivered a rousing dressing-room speech.

Henderson revealed Southgate has not yet cracked the whip with the squad and that the players are keen to avoid the first time coming after Sunday’s game with Croatia.

“I don’t think we have really given him that opportunity yet, apart from the end tonight at times,” the Liverpool midfielder said when asked if Southgate had ever dished out a rollicking.

“So hopefully he never has to, and not on Sunday. It’s a massive game for us, so we have just got to take the positives from the last few games and go and try and win the game.”

While Henderson was keen not to look at the Croatia game as a revenge mission from the World Cup, he did admit the semi-final heartbreak is likely to linger long in the memory for those involved in Moscow.

“I think you have got to move on in football,” he added.

“It is about development, it is about us as a team and it is not about anyone else. I think deep down you will always have it in the back of your mind because it is a huge moment for all of us to lose that game.

“It is always inside but I feel as though since then we have bounced back brilliantly, won some big games, some good games especially in the last camp.

“So it is another big test for us, it is another good side – they have just beaten Spain – a fantastic team, it will be tough Sunday so we have just got to make sure we keep going, keep working hard and keep doing the right things and if we do that we will get the right result.”