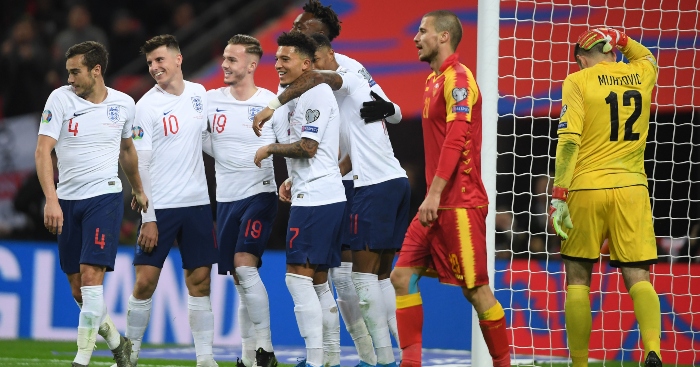 All told, it was a confusing start to a historic night at Wembley. The guest list included any ex-players with over fifty caps, those who had captained the side, the 1966 side, any left-footers, those who had scored more penalties than they missed and anyone with the initials ‘DB’ (Beckham, Bentley and Bent all seemingly present). The camera flashed between them at an almost nauseating pace.

The helmsmen in charge of such a historic ship? Captain Pougatch, his weathered and haggard first mate Keane keeping the young whippersnappers Dixon and Cole in line. The pre-match patter generally centred around the story that, despite the press’ insistence to not bother talking about, is being dragged on and on and on. Sterling vs Gomez: Two Men Enter, One Man Leaves… before being invited back by Gareth Southgate.

Roy Keane, for a long time now a totemic figure of calm and reason, conducted the discussion like the UNICEF peace keeper he is. “I remember having a full on scrap with Peter Schmeichel in the abandoned car park opposite the hotel in Bucharest. Knives were thrown- he set me on fire after throwing me on the industrial grill- I think it’s a good thing. Every team I’ve been involved in has had some argy-bargy with players, staff…” What’s that phrase? If you can’t spot the terrifying dickhead in the room?

Ashley Cole had nothing to offer on this as he literally once shot a child with an air rifle.

And so, to the analysis. Dixon and co seemingly thought that England would stroll through this game like a gentle walk of a summer evening. Harry Winks strolling around handing out the Aperol; John Stones and Harry Maguire lazily wafting away flies while kicking back on the picnic blanket; Jadon Sancho chasing after Harry Kane with a water pistol. Not a hinderance in sight, physical or mental. Carefree.

In fairness, they weren’t far wrong. England spent the first few minutes reeling from a truly terrifying Montenegro anthem, but such a threatening battle cry didn’t translate into much Montenegrin impetus. With a tightly-packed midfield and defence, England found early joy down the flanks. Sancho’s quick feet couldn’t tee up Kane, while Marcus Rashford found pockets of space between centre-back and full-back. Actually, “pockets of space” is perhaps too generous on Montenegro; rucksacks of space. Bags For Life of space.

England’s breakthrough came predictably early. Ben Chilwell clipped a ball over to Alex Oxlade-Chamberlain, who showed further glimpses of his immense talent after his horrid injury. A poised touch was followed by an arrowed drive into the far corner: a joyous moment for a man who should be occupying either the 6 or 8 position in England’s midfield come next summer.

Speaking of nailed-on starters, Chilwell may well have made the left-back position his own, and England’s second also came via his tremendous left foot. Montenegro’s Vesovic did brush Chilwell off like he was a lightweight breeze on his way to winning a corner, but this tiny flicker of Balkan hope was snuffed out immediately by the Leicester left-back.

Chilwell’s free-kick was placed on the head of Kane like he’d dropped it from a first floor window just above him. Montenegro’s defence was undone by a half-hearted dummy from Alexander-Arnold at the free kick. Just to reiterate: this was the standard of defence England had to break down. One that were easily undone by a dummy. Kane header, goal, 2-0, predictable. Rule Britannia.

The third, which came after 24 minutes, was almost completely identical. It was from a corner, actually. Bar that it was identical – the game largely read like a poorly-executed Choose Your Own Adventure book:

Amidst the backslapping and historical reverence, England still managed to conspire to give their minnow opposition decent chances. England do as England does. A soft free-kick lead to a Marko Simic header that was brilliantly turned away by Jordan Pickford – the replay showing Maguire and Stones somehow simultaneously pushing and pulling each other over in the background.

For all the endeavour from a side nobody thought would offer up any real resistance – which they shouldn’t be blamed for – Montenegro were truly awful. England’s fourth, a smashed in rebound by Rashford, only came after four unmarked white shirts queued up at the back post.

Peculiarly, the more goals England scored, the less this England performance seemed to shine. We might look back on this as the early act in a classic England dramatic performance. There’s optimism abound as England sweep aside all challengers in qualifying, only to arrive at an international tournament without a battle-hardened defence and midfield partnerships forged in the pressure-cooker fires given off by hard-pressing, technically strong opposition.

Qualifiers are tailor-made for a pair Maguire and Stones to begin to hone their understanding as the centre backs. Not by emerging as the bastions of heroic, last-gasp defending but simply feeling each other’s positional tendencies. When one needs to drop when the other marauds forward; how they shape to receive the ball from the pressured midfield; who takes on what task. Literally the only time they were pushed was when they ran into each other at the Simic chance.

Mason Mount, it’s six via a rebound – no, offside. He doesn’t look it via the replay. VAR would’ve sorted it. I miss VAR. At least there’d be some drama.

Tyrone Mings, like I assume all of the players on the England bench, will have been hugely frustrated to not start. After a measured and imperious display in Bulgaria, and repeatedly showing his leadership qualities for Aston Villa domestically, the minutes available in a game against this opposition would be far more valuable to him than most.

However, in a second half that threatened to drift meagrely into the north London night, some substitutions did allow for a glimpse into a longer term future. James Maddison came on to earn his first cap and dropped into the traditional spaces of a No.10, demanding the ball and moulding England’s attack. Minutes for Maddison will also prove hugely useful when England come up against far sterner defences than this. The ability to change their system from a flat midfield three with a pivot and two shuttlers to a two-man block and traditional number ten might be the next step on their quest to unlock the sternest of defences.

Sixth goal for England. What on Earth was that? Rashford, who was impressive all night, flashed down the left and his drilled cross bounces unwittingly off Sancho and Mount, before Aleksandar Sofranac shinned it into his own net. Truly bleak for Montenegro.

To fall into the perpetual trap that ensnares England fans is dangerously easy. Many will bemoan that England can’t win: beat those we should and nothing is learned, lose to anyone we shouldn’t and panic ensues. There were certainly positives to draw from this evening sojourn. The snappy passing and movement in the first half was refreshing to see. The youthful exuberance exudes from this group and to see the likes of Rashford, Sancho, Mount and Alexander-Arnold fully grow into international players is joyous.

But, unfortunately, the same hesitations remain. Can Kane grab a hat-trick against a defence that can actual mark? Is Winks good enough to keep the ball from Spain, or France, or Belgium? Will Oxlade-Chamberlain keep himself fit? Who knows.

At this squad’s best, they’re great fun to watch. At their worst? Who knows.

If you enjoyed this, feel free to give us some love in the FSA awards. Head here to vote…