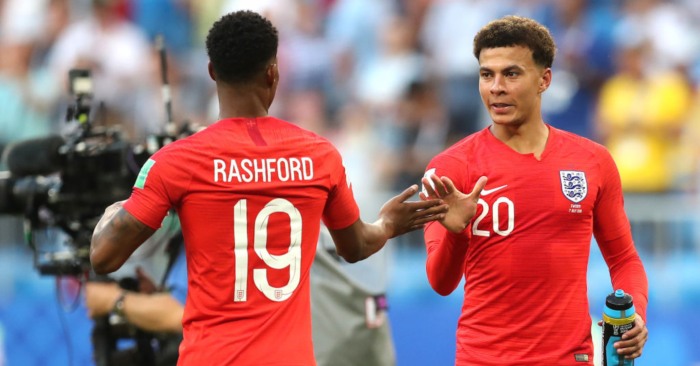 Such is the scarcity of excellent senior England players who feature regularly for their clubs, Aidy Boothroyd’s England Under-21 squad has been raided by Gareth Southgate. His Euro 2019 squad is strong but it could be stronger. So what’s the best England Under-21 side he could actually field? Players born on or after 1 January 1996 are eligible…

GOALKEEPER: Dean Henderson (Manchester United)
“We’ve been in discussions with Manchester United and I think they see it as a positive that he gets a year of Premier League football under his belt,” said Sheffield United boss Chris Wilder this week. Dean Henderson was phenomenal for the Blades last season and he is expected to return to Bramall Lane next season for his first season of top-flight football. His performances in the Championship have kept him ahead of Saint Angus Gunn in the England Under-21 reckoning and it is thought that Gareth Southgate has reassured Henderson that he is due an international promotion next season.

RIGHT-BACK: Trent Alexander-Arnold (Liverpool)
England are rather spoiled at right-back, with Aaron Wan-Bissaka, Jonjoe Kenny, Kyle Walker-Peters and Axel Tuanzebe all options. But all have to wait in a queue behind Trent Alexander-Arnold, who has already claimed five senior caps, is on the verge of his second Champions League final and appeared at a World Cup at the tender age of 20. He is a potential one-club hero for Liverpool and could be a 100-cap man for England.

CENTRE-BACK: Joe Gomez (Liverpool)
Gomez has played only 12 minutes of Premier League football in 2019 after ankle surgery left a massive gash in his season, and yet he was immediately recalled by Gareth Southgate for his Nations League squad in place of poor James Tarkowski; he’s that good. In fact, he’s so good that he is pretty much the sole reason Liverpool are not pushing hard for Matthijs De Ligt to partner Virgil van Dijk.

CENTRE-BACK: Jake-Clarke Salter (Chelsea)
Clarke-Salter has actually twice played for Chelsea – 16 minutes of a 4-0 win over Aston Villa in the Premier League and 19 minutes in a 5-1 win over Nottingham Forest in the Carabao Cup – but he spent the whole of last season on loan at Vitesse Arnhem. In fairness, there is no rich seam of young English centre-halves, with a fellow member of the Chelsea loan army (Fikayo Tomori) his only real competition.

When profiling CBs in the Eredivisie a young Englishman on loan from Chelsea stood out in the data. Jake Clarke-Salter (21), is one of the top performing players in the defensive metrics. Could he be a potential target for a possession based Championship side next season?

LEFT-BACK: Ben Chilwell (Leicester City)
It now seems utterly bizarre that England went to last year’s World Cup with Ashley Young as their first-choice right-back. Since then, Ben Chilwell has started five of England’s seven games and goes to the Nations League along with Danny Rose, with Manchester United Player of the Year Luke Shaw left in reserve. The Foxes full-back is a phenomenal talent and it’s a shame for Aidy Bothroyd that he has been robbed of his best left-back when he has been spoilt for choice at right-back.

CENTRAL MIDFIELD:  Harry Winks (Tottenham)
“Harry Winks is a player we really like and that’s a tough one because he has not played for a couple of months and we don’t get to see him in training,” said Gareth Southgate this week as he explained why the Tottenham midfielder is one of four players dropped from his Nations League squad. It has been another injury-ravaged campaign for Winks, who has started only 17 Premier League games. At 23, he could still play at Euro 2019 for England, who are so bereft of English Under-21 midfielders that they have called up 19-year-old Morgan Gibbs-White.

CENTRAL MIDFIELD: Ruben Loftus-Cheek (Chelsea)
Still eligible for this summer’s tournament by 23 days, but Loftus-Cheek has not actually played for England’s Under-21s since March 2017; he was promoted to the senior set-up as soon as he was playing regular Premier League football with Crystal Palace. He now has a World Cup under his belt and actually ended last season as a regular in Maurizio Sarri’s starting XI, so it really is a crying shame that he will miss the next six months of football after rupturing his Achilles.

Maurizio Sarri believes Ruben Loftus-Cheek will become 'one of the best midfielders in Europe'.

ATTACKING MIDFIELD: James Maddison (Leicester City)
His first year in the Premier League and he was the only player to create over 100 chances. Not the only English player, the only player. Not bad going at all for Maddison, who is a key part of the Brendan Rodgers revolution at Leicester and also the future plans of Gareth Southgate. “We’ve taken so many players from the under-21s early that we wanted the likes of Foden, Maddison, Mount, Wan-Bissaka, Sessegnon, to have a tournament together,” said Southgate earlier this month. “It will be good for them to get that tournament experience again. We think, for them, that is the next stage of their development.”

ATTACKING MIDFIELD: Dele Alli (Tottenham)
Dele Alli – with his 35 England caps – could still have been called up by Aidy Bothroyd for this summer’s England Under-21 tournament, and by God we wish that had happened. It would have been delicious. As it is, Alli will be at the Nations League with England after playing in the Champions League final with Tottenham. It has not been the best of seasons for Alli but he is still just 23 and he has already played almost 300 games in senior football.

ATTACKING MIDFIELD: Jadon Sancho (Borussia Dortmund)
Just the 12 goals and 14 assists in the Bundesliga for Sancho, then. It’s little wonder that his club want over £100m for the 19-year-old. And it’s little wonder that he has leapfrogged the England Under-21 set-up and landed squarely in the England senior side. He already has four full England caps that have reaped two assists. Show-off.

STRIKER: Marcus Rashford (Manchester United)
There’s no doubt that his season petered out – one goal in his last 11 Premier League games is a pretty compelling story – but he had limped through 90 minutes against Liverpool that seemed to hobble his season. Six Premier League goals in Ole Gunnar Solskjaer’s first eight games, and that nerveless penalty against PSG, hinted that there might just be enough in the 21-year-old to build a future around.