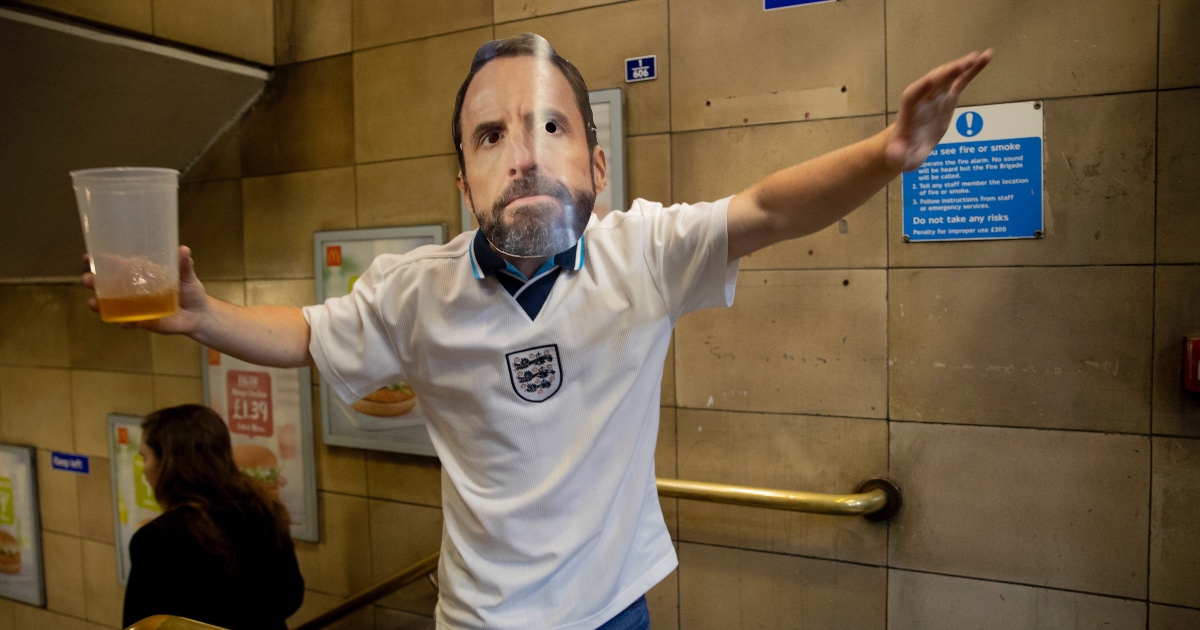 Football’s coming home? It never left. How England’s course though the Euros gives a glimpse of a better country and we’re all out out.

England v Ukraine and the uncharted territory of a European Championship quarters, cut through with confidence in a sticky Rome and a player called Slabhead about to hit the headlines.

There’s a flag held aloft by England fans, caught by BBC cameras that reads “England’s in but we’re out out”.

The previous years in the sceptred isle, splintered by the scapegoating of the E.U for the 2008 global financial crisis, can mean that references to England being “out” in a European context bring a Brexit message to mind, at first glance.

Yet, although Brexit isn’t out of sight, it’s definitely out of mind for a country that specialises in street partying and the reference on the flag is a popular line from comedian Micky Flanagan’s penchant for going “out out” on the town and taking the night as it comes.

That has been the England football team’s approach to the tournament too as they get sucked into the floodlit discotheque lights that could see them return delirious on the back of a milk float.

Gareth Southgate’s side are bringing out the best in the English, a camaraderie opposed to the divisive politics of Brexit. Yes, there’s an over-attachment to God Save the Queen but mainly because no-one’s come up with a better alternative national anthem.

It was Neil Diamond’s banger “Sweet Caroline” sung to the rafters after beating Germany rather than the naff “10 German Bombers” because fans don’t have to rely on war-time themes to get one over on the Germans anymore, we simply have a better football team and that feels so good.

The gaffer himself, quiet, intelligent and composed, like your really together uncle at a family party who just needs to give a look to stop your lairy cousins in their tracks.

Raheem Sterling, who’s burned off critiques of his choice of sink and tattoo design like he has roasted defenders. The only thing controversial about this eloquent, level-headed lad is his offensive levels of skill.

Taking the knee can be seen for what it is, a group of players showing a bit of solidarity to a black community that have been through a fair bit, not that the Black Life Matters protests have touched leafy Cheshire, where many of the players live, but they’ll make a gesture in solidarity anyway and solidarity is what football is about.

So, while the English sing and shout and jump and sway together and put their mates who have had a few too many into taxis and show all the care that fans demonised as hooligans have always done for each other, the best of the country is being shown to the world.

That gives us hope for a better future in England, where people look after each other a little more, where divisive influences are flicked the V signs like the arrival of a Mexican wave and we’re all out out for the summer.