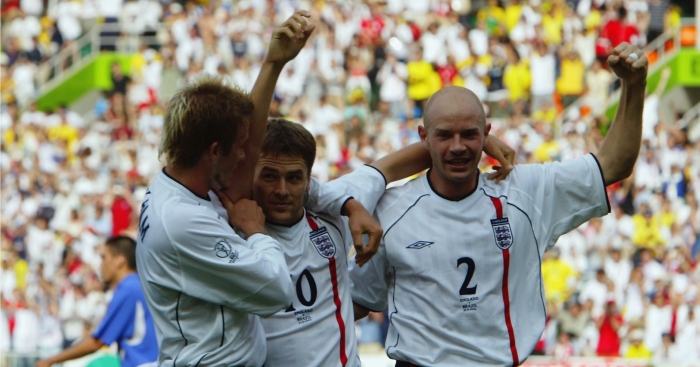 With Ruben Loftus-Cheek out of contention at Chelsea and out of the England squad, we look at five players who shone at one major tournament for England but never played another…

George Cohen, 1966 World Cup
Literally unimprovable one-tournament-wonder antics from the Fulham right-back, who went to only one major tournament with England but shrewdly chose the one they won but are very reluctant to talk about what with it being so very long ago now.

A solid, unfussy full-back, Cohen was an ever-present in England’s march to glory. His performances were immaculate in a system that, without orthodox wide attacking players, asked a lot of its full-backs. But Cohen’s most memorable moment of the tournament perhaps came after the heroically bad-tempered quarter-final against Argentina, when a photographer captured perfectly the moment Alf Ramsey stepped in to prevent Cohen swapping shirts with an opponent. “George,” barked Ramsey, so the story goes, “You are not swapping shirts with that animal.”

Cohen’s other decisive involvement came when blocking Lothar Emmerich’s last-minute free-kick only for the ball to spin into the path of Wolfgang Weber to make it 2-2. SPOILER ALERT: It was okay, England won 4-2 in extra-time.

The Cohens don’t piss about when it comes to major tournaments. George’s egg-chasing nephew Ben also went to only one World Cup, and also won it.

Trevor Francis, 1982 World Cup
A victim of England’s, ahem, patchy tournament qualification record in the 70s and early 80s, and ruled out of the European Championships in 1980 by injury, Francis’ only appearance at a major tournament came in England’s frustrating 1982 campaign.

Francis’ performances were aligned with the team’s, scoring twice as England sauntered through the opening group stage – helped along by Bryan Robson’s record-breaking 30-second goal against France in the opening game – before drawing a blank in 0-0 draws against West Germany and Spain in the second group stage as England missed out on a semi-final place.

Danny Mills, 2002 World Cup
It’s mad to think that there is now a whole generation of English football fans who probably wouldn’t believe that the summer of 2002 was punctuated by unironic chants of “Danny Mills is f*cking brilliant” echoing out of pubs up and down the land.

An injury to Gary Neville left Mills as England’s first-choice right-back. Neville wasn’t missed as Mills played every minute of England’s run to the quarter-finals and that 2-1 defeat to Brazil.

While playing well throughout the tournament, Mills’ finest moment came in that quarter-final defeat. Having been crunched to the floor by Ronaldinho in an enjoyable reversal of expected roles, Mills was about to get back to his feet when Paul Scholes sidled over and said “Stay down, the ref’s got a card out.” Mills did as he was told and Ronaldinho saw red.

Alas, England couldn’t find a way back into the game, but still a lovely bit of shithousery and a reminder that the correct answer to the seemingly insoluble “Gerrard or Lampard?” question is and always was “Scholes”.

Trevor Sinclair, 2002 World Cup
A third of Sinclair’s 12 England caps came at that World Cup. A last-minute replacement for Danny Murphy in the squad, Sinclair was thrust into service by Owen Hargreaves’ injury in the early stages against Argentina.

Sinclair’s sterling work in England’s Problem Left Midfield Position was key to England’s famous 1-0 win as Beckham got his retribution for the events of four years earlier in St Etienne. Sinclair kept his place for the goalless draw against Nigeria that secured top spot in the “Group of Death” and the 3-0 last-16 victory over Denmark.

Unlike Mills, Sinclair shamefully failed to get any Brazilian geniuses sent off in the quarter-final.

It all seemed pretty unlikely when an unhappy Sinclair flew home from the England camp in Korea ahead of the tournament, miserable at being on standby so far from his family.

Trevor Sinclair was THE BEST player at the 2002 World Cup. Him and Danny Mills ran the show.

Kieran Trippier, 2018 World Cup
Okay, much like Ruben Loftus-Cheek, this one’s a bit of a punt and, unlike George Cohen, there is clearly still time for Trippier to add another major tournament to his CV. But given the excellence of his performances in Russia, the fact it’s even feasible that he may never play at another major tournament is quite the thing.

Two moves for Kyle Walker opened the way for Trippier, first the move from Spurs to Man City and then Gareth Southgate’s decision to switch him from right-back to centre-back.

Even then, Trippier’s spot wasn’t assured. On the day England’s squad was announced, the jungle drums suggested Trent Alexander-Arnold’s inclusion meant Trippier would miss out. Nobody thought this particularly mental given TAA’s high-profile involvement in Liverpool’s memorable Champions League campaign.

Trippier made the cut, though, and was arguably England’s best player in Russia. Asked to provide the attacking width ahead of England’s three-man defence, Trippier created a string of chances while his set-piece delivery became integral to England’s defence-destroying berserker corner routines.

The other two men to score for England in World Cup semi-finals have 97 England goals between them. Trippier’s beautiful free-kick against Croatia remains his only international strike. With the Walker experiment sure to end soon enough and TAA continuing to develop, how many more chances will a 28-year-old Trippier get?