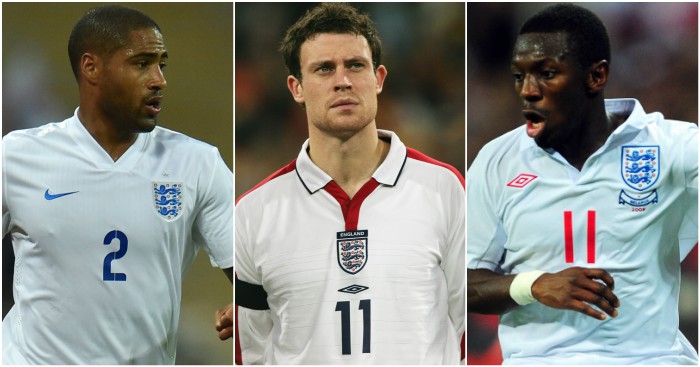 How have this Premier League-era lot amassed an average of 36 caps each?

GK: Scott Carson (4)
Carson’s four caps were achieved over a period of five years, and perhaps he should be credited for winning any more than two after the horror show that was his second appearance, when he chucked in Niko Kranjcar’s shot as Steve McClaren looked on from underneath his brolly.

The Derby keeper, now 31 and supposedly in his prime years as a keeper, was just one of a number of young English stoppers who were hyped up long before they had the chance to prove anything. Chris Kirkland, Ben Foster, Richard Wright…

RB: Glen Johnson (54)
Had the Stoke defender not been forced to pull out of Gareth Southgate’s squad for the qualifiers against Malta and Slovenia, Johnson may have extended his international career to 13 years. As it is, Johnson has still had over a decade around the England squad, during which time he has amassed 54 caps, the same number as Sir Stanley Matthews.

All of which begs the question: how?

His last one in the 4-1 embarrassment against Germany at the 2010 World Cup, when he and Terry  – apparent strangers – were taken for a walk around Bloemfontein by Mesut Ozil, Thomas Muller and Miroslav Klose.

CB: Martin Keown (43)
The former Arsenal defender was another who was never quite good enough to be first choice but still came within seven of a half-century of caps. Graham Taylor gave him his debut while Keown was still at Everton, before Terry Venables then completely ignored him.

Glenn Hoddle’s preference for a back three brought a return for Keown, who earned three-quarters of his caps after his 30th birthday. Somehow, he managed to wangle trips to two World Cups and a couple of European Championships.

LB: Wayne Bridge (36)
Many believe Bridge was unfortunate to emerge at a similar time as Ashley Cole, who eventually proved himself to be one of the best left-backs the country has ever produced. But the former Southampton, Chelsea and Man City defender still benefited from England’s failure to harvest a decent left midfielder from a population of around 60 million and went on to play 36 games for his country.

Bridge was involved in 71 squads over a seven-year period, before he decided he couldn’t stomach being around the John Terry anymore. Fair dos.

RW: Shaun Wright-Phillips (36)
The right-winger was a beneficiary of Steve McClaren’s ill-judged show of power when he exiled David Beckham from the England squad. But by that time in 2006, Wright-Phillips’ best form was already behind him.

He rediscovered some of it when he returned to Man City from Chelsea, just enough to convince Fabio Capello to take him to the 2010 World Cup. But Wright-Phillips’ international and club career died a slow and painful death after that tournament. His son, though, seems to be following in the family business, with D’Margio Wright-Phillips just called up for England Under-16s. If you weren’t feeling bloody old before, you are now.

His first start under Graham Taylor came alongside Geoff Thomas, which may be the least creative central midfield partnership England have fielded. Though he was hardly a Glenn Hoddle-type, Batty earned most of his caps  during Hoddle’s reign, when he is best remembered for missing the final penalty against Argentina at the 1998 World Cup. Typically, his England career ended with a red card against Poland in 1999.

CM: Tom Cleverley (13)
The midfielder was never better than when he was injured in 2011-12 – just after he had received his first call-up – which came before he had made even a single Premier League appearance for Manchester United. A few promising early performances saw some fans build Cleverley up to be the next Xavi, so he was always bound to disappoint when he returned from a badly timed lay-off.

He never made the grade at Old Trafford, or even at Everton, and once he could longer call himself a United player, his England career was effectively over after 13 forgettable appearances. Roy Hodgson thought he was a No. 10. A No.10!

LW: Stewart Downing (35)
The left-winger made his debut aged 20 and played his final international at 30, gathering 35 caps during the decade between.

Downing was, and continues to be, a grafter with occasionally brilliant delivery. But he never proved himself to be much more than a useful squad member, and had he not been left-footed at a time most players eligible for England struggled to stand on theirs, then he would have had about four caps.

CF: Emile Heskey (62)
The big forward was often seen as a fine partner, and the fact seven England managers wanted Heskey in their squad tells its own tragic story. But so does a record of seven goals in 62 appearances.

As impressive as he was a target man, his finishing was often terrible and he lacked the killer instinct required in strikers at the highest level. A useful option, certainly, but to have been relied upon so heavily for so long is a damning indictment of the strikers England have produced.

The Arsenal flier has been dropped for more tournaments than he has been to, with Fabio Capello and Roy Hodgson both deciding that he wasn’t worth a squad place in 2010 and 2016 respectively. Gareth Southgate twisted the knife somewhat by dropping Walcott on his birthday earlier this month, but despite falling short of so many managers’ expectations, he has still managed to edge towards a half-century of caps.