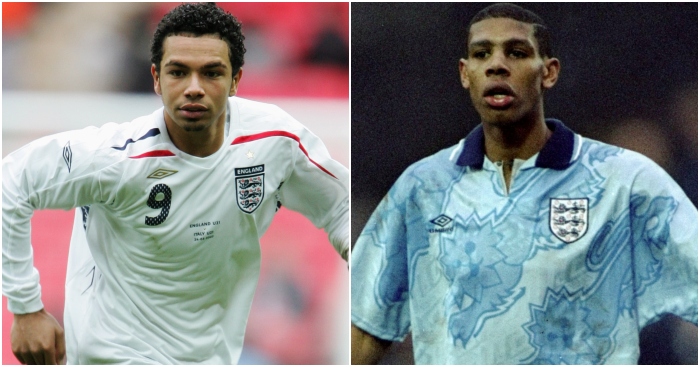 The 10 undercapped England players might read this and weep…

GK: Fraser Forster (6)
At 30, Forster should be in his prime as a Premier League goalkeeper. Instead, he can’t get near Mark Hughes’ squad at Southampton. And it’s a wonder he ever got a look-in for England, let alone a cap.

Forster was at Celtic when he earned his first cap – a 2-0 home defeat to Chile. Tending their goal was then a cushy gig, given there were generally only six testing games a season, so it was presumably a couple of decent performances when Barcelona had shooting practice against the Bhoys which caught Roy Hodgson’s eye. His last squad appearance came last October, a couple of months before he was bombed by Saints.

RB: Glen Johnson (54)
Had the then-Stoke defender not been forced to pull out of Gareth Southgate’s squad for qualifiers against Malta and Slovenia in 2016, Johnson may have extended his international career to 13 years. He still had over a decade around the England squad, during which time he has amassed 54 caps, the same number as Sir Stanley Matthews.

His last one came in the 4-1 embarrassment against Germany at the 2010 World Cup, when he and Terry – apparent strangers – were taken for a walk around Bloemfontein by Mesut Ozil, Thomas Muller and Miroslav Klose.

CB: Martin Keown (43)
The former Arsenal defender was another who was never quite good enough to be first choice but still came within seven of a half-century of caps. Graham Taylor gave him his debut while Keown was still at Everton, before Terry Venables then completely ignored him.

Glenn Hoddle’s preference for a back three brought a return for Keown, who earned three-quarters of his caps after his 30th birthday. Somehow, he managed to wangle trips to two World Cups and a couple of European Championships.

LB: Wayne Bridge (36)
Many believe Bridge was unfortunate to emerge at a similar time as Ashley Cole, who eventually proved himself to be one of the best left-backs this country has ever produced. But the former Southampton, Chelsea and Man City defender still benefited from England’s failure to harvest a decent left midfielder from a population of around 60 million and went on to play 36 games for his country.

Bridge was involved in 71 squads over a seven-year period, before he decided he couldn’t stomach being around John Terry anymore. Fair dos.

He also wrote this: “Though as I get older perhaps I feel the need to say something to the uninformed w****rs who offer their opinions in programmes like the one about England’s worst players. And: ‘F*** you’ is what I want to say.”

CM: Jermaine Jenas (21)
Jenas allied himself with Michael Carrick when suggesting that Steven Gerrard and Frank Lampard were the reason they never won more caps. The primary difference being that Carrick has a genuine grievance.

Jenas suggested that had he not been a Newcastle player, he would have had a better shot at beating Lampard to an England place in 2003. “There was a time when I was battling with Frank Lampard to start in the England midfield alongside Steven Gerrard and maybe that was a missed opportunity for me,” he explained to our friends at Planet Football. “He was in a Chelsea side challenging for the Champions League under Jose Mourinho and I was at Newcastle.

“I got the impression that Sven really liked me at the time, but I was at a club that was on the slide a little and that worked against me. Training with England was great. Working with all these great players, you lift yourself and when I went back to Newcastle, it felt like I was a few steps ahead of the lads around me. Then, by the time you next meet up with England, I was back down at Newcastle levels again and that didn’t work well for me in terms of catching the eye in training with England.”

Newcastle finished third in the Premier League in 2002-03 and fifth in 2003-04 while Jenas won the first third of his caps. They were in the Champions League both seasons.

LW: Kieran Richardson (8)
The left-winger won all his eight England caps while at Manchester United. He enjoyed a dream debut, scoring twice in a 2-1 win over USA in 2005 before hanging around the squad for 18 months.

He admits he didn’t apply himself properly while his career was peaking in his early 20’s: “I’m not saying I was off the rails; I was playing football and going out with my mates, like everyone else does.”

Then Richardson found God but even he couldn’t help him win back an England place once the winger could no longer claim to be a United player.

RW: Dennis Wise (21)
The Chelsea snide’s England career lasted 11 (eleven) years after first being called up as a Wimbledon player in 1989. After moving to Chelsea, he scored on his debut against Turkey but that was his only goal in 21 appearances.

Wise missed out on a finals squads under three different managers in 1992, 1996 and again in 1998 before Kevin Keegan finally took him to a tournament in 2000. That came after a three-season England sabbatical enforced by Glenn Hoddle, who clearly didn’t rate his former Chelsea skipper as England class. Hoddle wasn’t always wrong…

CF: Emile Heskey (62)
The big forward was often seen as a fine partner, and the fact seven England managers wanted Heskey in their squad tells its own story. But so does a record of seven goals in 62 appearances.

As impressive as he was as a target man, his finishing was often terrible and he lacked the killer instinct required in strikers at the highest level. A useful option, certainly, but to have been relied upon so heavily for so long is a damning indictment of the strikers England have produced.

The Arsenal flier has been dropped for more tournaments than he has attended, with Fabio Capello and Roy Hodgson both deciding that he wasn’t worth a squad place in 2010 and 2016 respectively. Gareth Southgate twisted the knife somewhat by dropping Walcott on his birthday last year, but despite falling short of so many managers’ expectations, he has still managed to edge towards a half-century of caps.