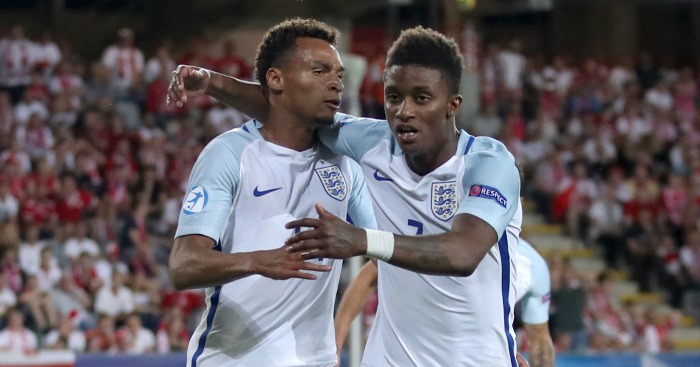 England Under-21s cruised into the semi finals of Euro 2017 after dismantling hosts Poland.

Demarai Gray, Jacob Murphy and Lewis Baker’s penalty sealed a comfortable 3-0 win as England escaped the group stages at the tournament for the first time since 2009.

They topped Group A ahead of Slovakia, who beat Sweden 3-0, with seven points and will play their last-four game on Tuesday but must wait to discover their opponent.

Aidy Boothroyd’s assured side – who could play the runner-up of Groups B or C or the winner of C, which may be Germany – were always in control in their best display of the competition against the 10-man hosts.

Jan Bednarek was also dismissed for a second booking after conceding a penalty for fouling Tammy Abraham as the hosts suffered an early exit.

With Abraham benched after two gruelling games, Nathan Redmond led the line with Gray and the Leicester winger made an instant impact.

England had already enjoyed a fast start with James Ward-Prowse, Lewis Baker and Alfie Mawson all going close within the opening five minutes before Gray put them in control.

The 20-year-old scored just twice for Leicester during a frustrating last season but was on target he when he collected Ben Chilwell’s pass – following a delicious long ball from Jordan Pickford – and his 25-yard shot hit Jaroslaw Jach to fly past Jakub Wrabel.

Gray had also scored the goal in Kazakhstan last October to seal England’s spot in Poland.

Comfortable and settled with a sixth-minute lead the Young Lions relaxed with Poland’s muted response offering them encouragement.

The hosts, bottom of the group, needed victory but England dictated the play and never allowed Marcin Dorna’s side to find the tempo which could haul them back.

A second goal was needed to avoid and it almost came on the half hour when Nathaniel Chalobah’s miscued effort called Wrabel into action and from the resulting corner the Slask Wroclaw goalkeeper brilliantly turned away Mawson’s free header.

Swift then tested Wrabel from distance after 38 minutes but 60 seconds later Chalobah was forced off with what appeared to be a groin problem with Will Hughes, on the verge of a move to Watford from Derby, replacing him.

It was the only blemish in an accomplished first half from England – by far their best display in Kielce – but they lost Redmond at the break with Murphy coming on.

Confident England maintained their grip and Swift volleyed wide after 55 minutes from another brilliant set-piece delivery from Ward-Prowse.

A second goal was needed to avoid late nerves and it duly arrived after 69 minutes in fine style as England hit Poland on the break.

Calum Chambers expertly won the ball in his own area and found Baker who sent Gray scampering away down the left with Murphy in support.

Gray raced into the area and squared for Norwich winger Murphy to tap in from six yards at the far post to double the lead and give Boothroyd’s men deserved breathing space.

Przemyslaw Frankowski drilled wide soon after as Poland tried to respond but there was to be no comeback.

Abraham wasted a fine chance with when he headed over but then won a penalty after being felled by Bednarek with nine minutes left.

The defender was sent off for a second booking and Baker dispatched the spot kick to add gloss to the result.