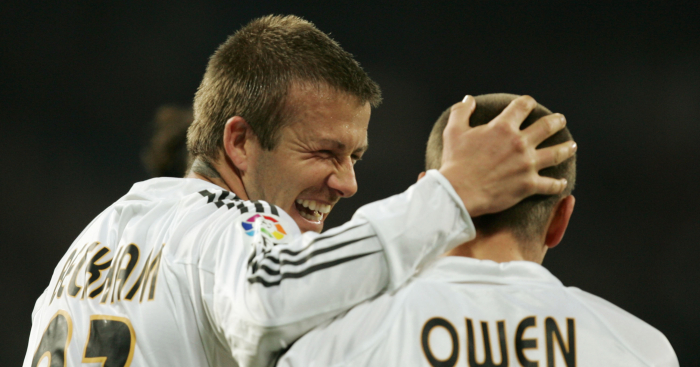 Jadon Sancho has been capped for England while playing abroad. It’s been done before…

After three years in the international wilderness, Fabio Capello saw fit to reintroduce Scott Carson to the England fold in 2011. The goalkeeper’s most recent appearance for the Three Lions had come during his time at West Brom, but when he replaced Joe Hart at half-time of a 1-0 win over Sweden, he was plying his trade in Turkey with Bursaspor. Jack Rodwell and Bobby Zamora also featured in a game settled by a deflected Gareth Barry header, which feels remarkably fitting.

A European Cup and PFA Young Player of the Year award-winner with Aston Villa, Gordon Cowans left to join Bari in 1985. He played twice for England during his time in Italy, scoring in a 4-0 win over Egypt and starting a 1-0 victory over the USSR in 1986.

He may have been the first British player to feature for Real Madrid, and the first black player to be capped by England at any level, but Laurie Cunningham was still overlooked on the international scene. He had played three times for England before moving to Spain in 1980, with his subsequent three caps all falling in that calendar year. He later moved to Sporting Gijón, Marseille, Charleroi and Rayo Vallecano (twice) before his untimely passing in 1989, but never again came onto the Three Lions radar.

One year with Highley Miners Welfare, two apiece at Kidderminster Harriers and Cardiff and four years as a striker at Aston Villa persuaded the oft-ignored Gerry Hitchens to move further afield for his opportunities. And to be fair to him, more than half of his caps came after he left England behind for Italy. He was actually the first player to be capped for England while playing abroad, and the first to go to a major tournament (1962 World Cup) while playing for a foreign team.

No, not the Dave Watson of Everton FA Cup-winning fame. This is the David Watson of relative journeymanship, who ended up at Werder Bremen in 1979 after spells with Notts County, Rotherham, Sunderland and Manchester City. His red card and subsequent eight-week ban in his second Werder game – as well as an early return to England – meant he played more often for his country (4 times) than his club (twice) while in Germany.

“No matter how much money you have here, you can’t seem to get Rice Krispies,” Luther Blissett once remarked of life in Italy. But the man who scored a hat-trick on his international debut against Luxembourg could still get a handful of England caps despite his relative struggles abroad.

When Marseille signed Trevor Steven for £5.5m in August 1991, it was the joint-highest fee involving a British player at the time. Then 27, the winger would stay around the England set-up, earning his last six international caps in France. Not bad to say he left after 12 months, and had only been capped five times in two years with Rangers.

Already in his 30s by the time he left England to exhibit his talent elsewhere, Glenn Hoddle managed to carve out four successful years in Monaco. He won the Ligue Un title in his first season, was voted Best Foreign Player in his second, and continued even after his Three Lions retirement in 1988.

Paul Gascoigne emerged from the 1990 World Cup as a global superstar, but he was not the only England player to impress sufficiently to earn a move to Italy. In the same summer Gazza left Tottenham for Lazio, Des Walker departed his Nottingham Forest home to try his luck at Sampdoria. His time in Serie A was not quite so memorable, with Sven-Göran Eriksson playing him out of position at right-back in his only year outside of England, but he did keep his international place.

Michael Owen is not remembered all that fondly in Real Madrid, despite an impressive record of 17 goals in 26 starts. During his sole season in Spain, he retained his England place and duly netted six times in 11 matches. That included a hat-trick in a win over Colombia in May 2005 – six days after former club Liverpool had lifted the Champions League.

In total, 34 of Paul Gascoigne’s 57 caps came while he was playing club football outside of England. He earned more caps in three years at Rangers (22) as in four with Tottenham (20), as well as 12 at Lazio and three with Middlesbrough. He was sadly never even called up while at Chinese second-tier side Gansu Tianma.

UEFA once noted that ‘of all England’s footballing exports in the modern era, none was as successful as McManaman’. Yet even while he was scoring in Champions League finals and winning La Liga crowns, he was never truly a regular for his country.

England’s 1982 World Cup squad contained three players each from Ipswich, Liverpool and Manchester United, two from Arsenal, Manchester City, Nottingham Forest and Tottenham, and then one from Aston Villa, Brighton, Southampton and West Ham. Tony Woodcock, then coming to the end of his first spell at FC Koln, was truly the odd one out.

Paul Ince had just barely left Serie A by the time his most memorable and blood-soaked England performance came against Italy in October 1997. But the midfielder was in the midst of his Italian job during Euro 96, where he was supposedly the designated sixth penalty taker in that semi-final shoot-out.

Did you know that Chris Waddle signed for Stocksbridge Park Steels in the same year a teenage Jamie Vardy joined their youth system? Well you bloody do now.

Most will know that many of Trevor Francis’ England caps came during his spell in Sampdoria, but he also earned a couple of call-ups while on a weird kind of loan with NASL side Detroit Express. He headed to America at the end of the 1977/78 season with Birmingham, returned to become the first £1m footballer with Nottingham Forest in February 1979, then went back to Detroit that summer, never fully losing his grip on an England place.

Far from damaging his England prospects, Ray Wilkins found that his candle shone brighter away from the spotlight. He made nine and ten international appearances in 1985 and 1986 respectively – his two full calendar years in Italy. Only in 1982 (12) did he play more often for his country.

Two players have won the World Cup Golden Boot outright without reaching the semi-finals at the same tournament. Much like James Rodriguez earned a move to Real Madrid with his exploits in 2014, Spain’s other giant saw fit to bring in Gary Lineker in 1986. He played 22 of a possible 30 England games as a Barcelona player.

And that really might have been more had England not botched qualification for the 1978 World Cup, despite having the reigning Ballon d’Or winner within their ranks. Keegan won the Bundesliga two years after becoming a European champion with Liverpool, yet his most memorable moments for his country are rather less successful.

With his final cap coming at Rangers under Graham Taylor in 1992, Mark Hateley only actually made four appearances for England while plying his club trade on home soil. They all came during his more formative years at Portsmouth.

One of two players to have earned England caps while playing for three different clubs, David Platt scored the Three Lions’ only goal at Euro 92, shortly after leaving Bari for Juventus. He would then have been at the 1994 World Cup as a Sampdoria player, had England actually qualified.

Let it be known that no England player has received a higher proportion of their caps while playing for a foreign club than Owen Hargreaves (92.8%). And let it be remembered that the midfielder was so completely vilified due to his stay in Germany that The Sun once stated he had ‘the public persona of a mass murderer’.

The second footballer to play for England while with a non-European club team, David Beckham did not quite blaze the trail for Brits abroad, but he took it to greater lengths than anyone before him managed. He was England’s regular captain throughout his time in Spain, which included three major international tournaments, and was even skipper once against Trinidad and Tobago in 2008 during his American sojourn.