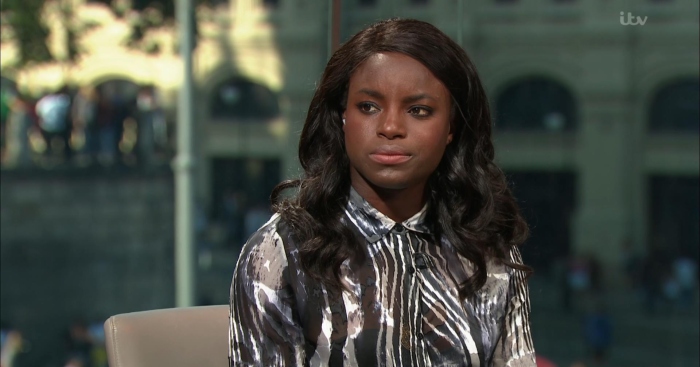 Simple Simon
The only credit we can give to Simon Kelner – and giving any credit at all to Simon Kelner hurts Mediawatch more than we can possibly say – is that he admits he poses his ludicrous question ‘nervously’ in i News. He should be nervous; Mediawatch is always nervous before it says something horrific.

Basically, Kelner wants to know why BBC and ITV have used female pundits Alex Scott and Eni Aluko on their World Cup coverage. Altogether now: Because they are incredibly good pundits educated to a level far beyond their male counterparts and both have over a century of caps for the country. Will that do? Apparently not.

‘My only question – and I pose it nervously – is this: why did our major TV channels feel the need to have a female presence on their World Cup panels?’

Did they ‘feel the need’ or did they just choose the best person for the job, regardless of gender? Which is basically one of the tenets of a fair and just society.

‘The fact is that the World Cup is competed for, exclusively, by men. There is an enormous amount of diversity in this competition in terms of race, colour and ethnicity, but not of gender. This is not to say that only men have a right to comment on professional football, but my intuition is that the TV bosses sought to have women on the panel for reasons of appearance rather than to satisfy a latent demand to hear their opinions. And isn’t that tokenism in and of itself?’

So your ‘intuition’ is that TV channels have chosen certain excellent pundits – and Kelner does not deny that they are good – because of their gender? We wonder whether Kelner also intuits that the NHS were displaying ‘tokenism’ when they employed female doctors, some of whom are even allowed to work on male bodies. EVEN THOUGH THEY DO NOT HAVE COCKS!

Many of us forced to watch Ryan Giggs are wondering why a major TV channel felt the need to have a Welshman on our screens; so down with Welsh tokenism. Meanwhile, the BBC’s occasional all-white, all-male, all-English line-ups for non-English games really would benefit from a shot of diversity of any kind. Our kingdom for a pundit not in possession of between five and 60 England caps, we beg of you.

‘I would only question the insight they offer. Women’s football is a very different game from that played at the World Cup, much less intense and physical, with very different tactical exigencies.’

Ah, it’s not sexism, it’s about whether women – both with degrees – can adapt their own extensive experience and knowledge of football to a version of the game that is slightly different? Mediawatch must have missed the World Cup where Danny Murphy proved he was a world-class footballer.

Presumably their pretty little heads will be spinning with all those different ‘tactical exigencies’, competing for precious little space with fluffy bunnies, shoes and periods.

‘I’m not saying that women’s football isn’t entertaining or relevant, but it’s like getting a netball player to discuss major league basketball.’

Oh bloody hell. You were right to be nervous, Simon. Some questions:

Does he know that netball and basketball are actually different sports with different rules? The women’s equivalent of basketball is… basketball.

Does he know that women and men play the same sport of football with the same rules? It’s not converted to non-contact sport so women don’t break their nails, fella.

And, while not the most important wrongness on display here, what the slam-dunking f*ck is ‘major league basketball’?

Actually, asking a woman footballer to discuss football is exactly like asking a male tennis player to discuss women’s tennis, which you will be seeing at Wimbledon very soon indeed.

We presume that Simon Kelner will soon be nervously asking what qualifies John McEnroe to comment on a women’s tennis match in 2018 when he has only played the rather more serve-and-volley-orientated men’s version of tennis, largely with a wooden racket.

Our intuition is that he will ask no such thing.

Poch spice
Mediawatch often remarks that stories should not grace back (or indeed front) pages if the opposite would be a far, far better story. And never has it been more true than with The Sun’s back page featuring a Neil Ashton ‘exclusive’ that Mauricio Pochettino celebrated Harry Kane’s last-minute winner. Yes, ‘Man Celebrates Goal Scored By Friend’.

Kane himself has said this week: “Poch texted me, he sent a lot of love hearts and said ‘Come on England!’. He is rooting for me. He is not just my boss, he’s my mate. He’s the manager, but he’s a friend as well. He wants me and the whole team to do well.”

So quite why we needed Mauricio Pochettino to confirm that he is not actually a hypocritical d**k, and quite why The Sun deemed this to be the biggest story in football, is unclear.

How wonderful that every English newspaper has spent tens of thousands of pounds to send their reporters to the World Cup, and the ‘biggest’ story to emerge on Wednesday came from an interview conducted by telephone with a man in Ibiza.

From London with love
The Sun website promises all ‘the latest news, action, live scores, gossip and exclusives from Russia’ so it was definitely worth paying all that money for all those football reporters to go to Russia.

Their top World Cup stories are as follows at 11.30am on Thursday:

‘England team ‘leaked in training notes’ hinting Sterling will be axed’ – written not by Neil Ashton or Charlie Wyett in Repino but by digital sport reporter Toby Gannon.

Over the moon
As soon as Gareth Bale’s agent Jonathan Barnett was asked about his client joining Arsenal and said, “I’d love him to play there but it’s got as much chance as me going to the moon,” we knew. We just knew.

We hope Jonathan Barnett enjoys his ‘possible’ trip to the moon.