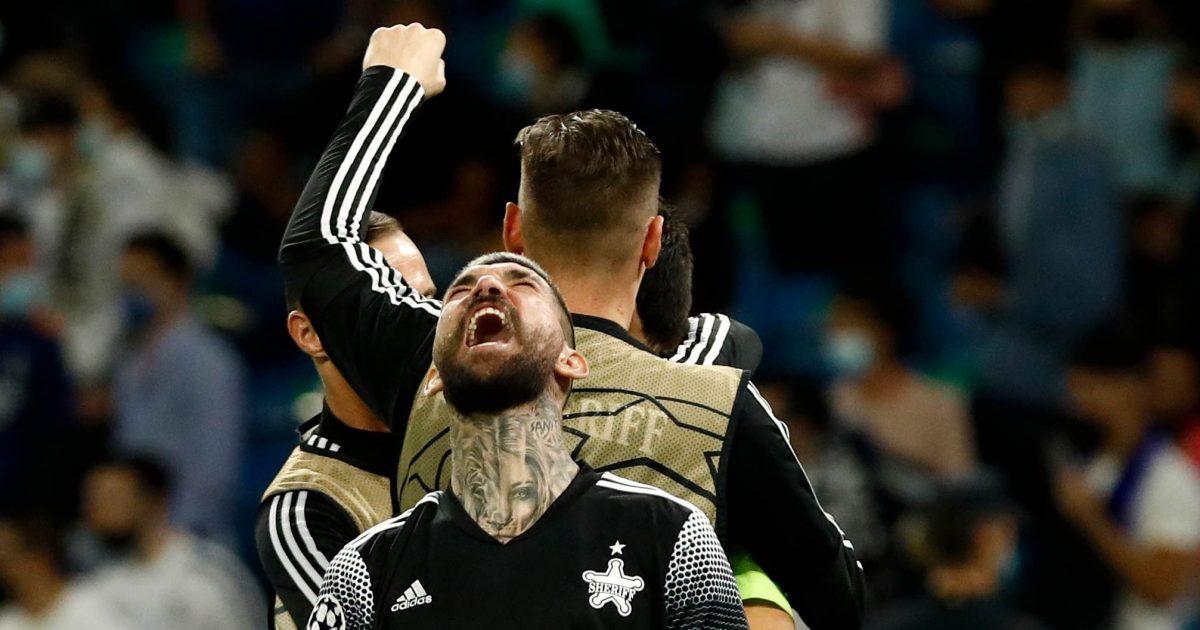 When a club is called Sheriff it is a gift to headline writers. When it beats Real Madrid in its own backyard, it’s a gift wrapped in gold.

It is quite the story. The Moldovans (not actually Moldovans) have played four qualifying games to get to this vaulted position of topping their group after two games.

They’ve only been in existence for 24 years and in that time have amassed 19 championship titles, ten cups and seven Super Cups.

Based in Tiraspol in Transnistria, an unofficial region of Moldova with its own currency that you cannot take out of the strangely oppressive Soviet-style country, it plays in a stadium (owned by Sheriff, which makes them unique) that holds just 12,000. Sheriff have money and no other club in the country does and that’s why they win everything.

Where their money comes from is somewhat questionable. Going there and asking about the club finances is probably unwise. It looks towards Russia rather than the west.

But owners from nasty regimes are no barrier to clubs playing in UEFA competitions. Dodgy money? Come on in. Financial dominance crushing the opposition? Welcome to the party. Owners who are part of a horribly oppressive regime? Nil problemo.

The only thing standing in Sheriff’s way is the format of the Champions League itself – a format designed to give absolutely every chance to the biggest, most popular clubs to get through to the knockout stages when the competition really wakes up.

This reduces the jeopardy in the league stages to almost  nothing. You can lose three games and still go through, or you can lose just two and go out. Beating Madrid is an achievement that should be rewarded but as it stands, it isn’t, not really. You can’t rely on having one or even two good days as a tiny club; you’ve got to pretty much have four or five.

Sheriff, having won two, could lose two and draw two and get knocked out. This is how UEFA wants it, of course. The competition is set up this way to maximise audiences and we must assume TV revenues. As it happens, it gets quite low audience numbers when it’s behind a paywall but rights fees don’t reflect this unpopularity for a number of reasons that needn’t trouble us here.

Most football fans watching the Champions League are relatively neutral and want wee clubs like Sheriff to hand spankings out to pompous debt-ridden organisations like Real Madrid. Though Sheriff are hardly a moral model of financial fairness themselves, we can hold our nose (as we’re asked to do about many others) about that and laugh at the pricking of the big brand balloon.

While it’s great to see the big clubs strut their stuff, ultimately when the latter stages and winners are drawn from the same group of teams every year, it kills the romantic’s dreams. The big brands rule like never before and some love it that way. But there has to be room for the niche, for the unlikely heroes and the massive underdogs too. Those are the stories that really captivate. Many of us would love to see Sheriff qualify instead of Madrid, Brugge progress at the expense of Manchester City, Young Boys at the expense of Manchester United, but they have to over-achieve so many times in the six league games (and qualifying) that it makes it not impossible, but unlikely.

And with that unlikeliness, real joy is snuffed out. It’s not right and it’s not okay.