Home Arsenal ‘Enough is enough’? You’re damn right it is 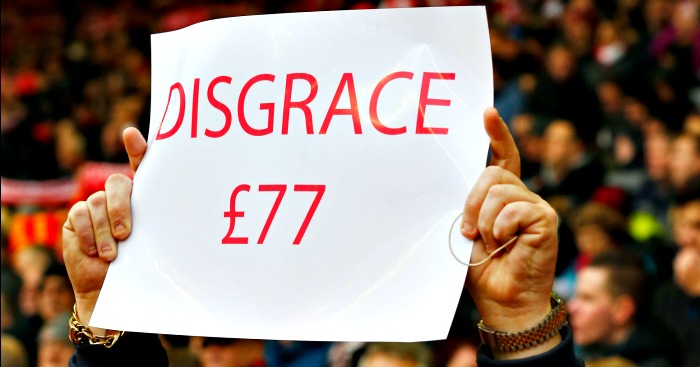 £77 for a ticket see a football match is far too much money, especially when the income from fans is a small percentage of revenue from everything else. Of course, the £77 Liverpool want to charge is only 200 tickets for 6 games, but it is symbolic of the direction of travel. In a society where the wealthy elite operate a policy of divide and rule with ruthless determination, the Kop walkout was a welcome bit of collective action.

Business people who run football clubs as though they are normal businesses, who refer to merchandise income streams in the same breath as they call fans customers, are to everyone, except themselves, some flavour of awful. When Liverpool fans complained that £77 is too much for 90 minutes of football, some pointed to similar ticket prices for one-off gigs and for other forms of entertainment, seemingly forgetting that most fans want to go to support their club up to at least 19 times per season. Seemingly forgetting that sitting outdoors on a plastic seat in February is not the same value product (to put it in their own language) as sitting in a warm theatre on a plush velveteen seat. Also forgetting that this is a hugely wealthy industry, made wealthy by the presence of fans who are not wealthy. In redux, the rich want the poor to pay more. Enough is enough.

I can fill my car up for £55 and get 600 miles out of it. That is much better value in my life. For £77 I could dine out at an excellent local restaurant and have a three course meal, three times a week. For £77 I could buy two bottles of Glenmorangie single malt and kill myself with pleasure. Or I could drink 77 halves of beer in the Pound Pub in Stockton-on-Tees and try to pretend life had meaning. In other words, if we’re going to get into the relative value of a £77 investment in the entertainment business, football loses at every turn. Enough is enough.

Ian Ayre went on about how they have some £9 tickets for category C games and how 1000 tickets per season are given away free to kids. That’s 1000 out of about 800,000, Ian. Very generous of you, that. Bragging about this sort of thing shows the gulf of understanding. First, £9 (not that there are many tickets at that price) should be a not untypical price for any game, not just the PR giveaway for the games you consider will be the worst attended. This ranking of games into categories, though entirely normal nowadays, is a classic divisive principle. Can’t afford to go to a good game? Here, have a cheap ticket for a rubbish game. We all take for granted that things work like this in 2016, but it’s a choice, not an inevitability. No matter you may have paid into the club for 35 years, if you can’t afford it anymore, screw you. Your loyalty is only worth what you will pay today. The 10,000+ who walked out of the Kop are making a stand against that principle. Enough is enough.

These corporate culture-inculcated capitalists know the price of everything and the value of nothing. They look at us like we’re fools, buying into their warped view of money, even though it does us down. Well they need teaching a bloody lesson. Screwing more blood out of the fans while they unconscionably squander money elsewhere on poorly scouted players, lavish directors and managerial wages and over-remunerated players, is their agenda. They pander to the executive box culture, because it’s the culture they know. They cut the jobs of the regular people at clubs, while they dip their snouts ever deeper into the trough of money that they do little to earn, but wallow in, as though it is all of their own making. Enough is enough.

People say, well you should stay away if you don’t want to pay the money, it’s a free market, football is a product like any other. So deep has this inculcation gone, most of us spout, as though hypnotised, the language of the free-market monetarism, without realising we’ve been taken for fools by rich men – and it is almost always men – who have sold us a form of enslavement and told us it is freedom. They have so infected us with the language of their cult that they can sit back and let the slaves do their work for them, safe in the knowledge that a pliant customer is a profitable customer. But why should the poor always surrender to the rich? We live here too. Enough is enough.

People do stay away, either morally disgusted or financially disenfranchised. Time was, you’d see loads of teenagers and twenty-somethings on the terraces. Not now. The profile of crowds has changed. The average age is, by the Premier League’s own measure, 41 and it often seems much higher than that. Worse and more offensive still, this price hiking is totally unnecessary. If every Premier League club gave away 30,000 tickets for free, every home game, assuming they’d have sold all of them at the average ticket price of £32.50, they’d be deprived of less than a million pound per home game, less than 20 million per league season. Every club routinely throws that sort of money away on at least one bad transfer. For most clubs, this is chump change in the new era of 8.5 billion quid TV deal. The idea that fans have to pay more for a big stand or for top players is ludicrous. The ticket money is a mere flea bite on the elephantine body of modern football. Enough is enough.

But there is a bigger point to be made. The corporate whore sees only the bottom line. If the stadium is full, then it’s job done, but if you deprive vast swathes of that community of the chance of seeing their local football club, that doesn’t come free of charge for the rest of us. It has knock-on effect into every day life. It is a recipe for societal discontent. Happiness 0 – Bitter Sense That Things Are Wrong 5. Enough is enough.

I’m not sure the people in charge of football today have any idea how skint many people in Britain are and how unaffordable even the typical £32 ticket is. I bet they think £32 isn’t much money. But we have at least half a million people using food banks. At least one and a half million on minimum wage (excluding the ever-expanding self-employed – many of them on zero hours contracts). One in five people earn less than the living wage. Average income is around £500 per week, often with at least half of that absorbed by housing costs. We’re a low-wage economy and yet the Premier League clubs all too often charge as though the opposite is true. Enough is enough.

Even if a ticket is £32, we’re told to think it’s good value. It isn’t. That’s still too expensive and anyone who thinks it isn’t has drank too deep from football’s propaganda smoothie. Premier League football should be £5 – £15 for all regular tickets. Clubs can easily afford that and frankly, it’s a not unreasonable charge for the unluxurious experience of sitting on a plastic seat, usually in the cold, for 90 minutes. It’ll take prolonged collective action to break this financial and cultural hegemony which infects top-flight English football with its scorched earth capitalist principles. The odds are stacked against it happening, but the 10,000 who were reported to have walked out of Anfield are heroes fighting for a better, more fair world. They’re for inclusion, not exclusion. For together, not apart. For community, not individuality. For love over gold.

Because enough really is enough.