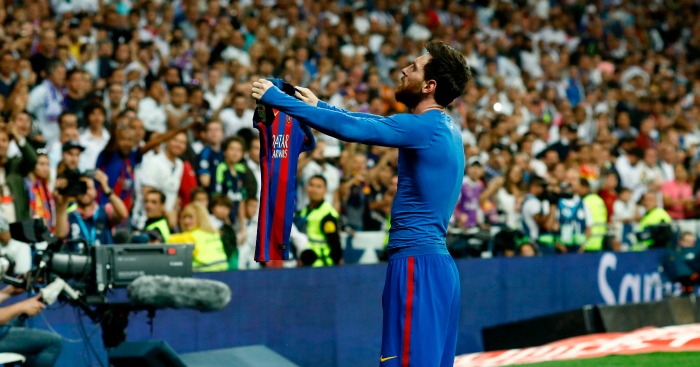 Messi’s 500th Barcelona goal – struck with the last kick of a thrilling match – gave the visitors a memorable 3-2 Bernabeu victory and takes them to the LaLiga summit.

The two sides are level on 75 points, but Barcelona sit top by virtue of having the better head-to-head record from the two games with Real.

Zinedine Zidane’s side do have a game in hand with six matches to play, but Barcelona will be hoping for a momentum shift after Messi ended his run of six El Clasico games without a goal.

“He is the best player in history, he is incredibly decisive at all times,” Enrique was quoted as saying by Marca on Messi’s virtuoso performance.

“I have seen a lot of football, it is a great pleasure that he is one of us.”

Casemiro gave Real a 28th-minute lead after Sergio Ramos had hooked against the post.

But Barcelona were level within five minutes when Messi burst on to Ivan Rakitic’s pass on the edge of the box and finished in style.

In a see-saw contest, Rakitic put Barcelona ahead with a ferocious 73rd-minute drive before Ramos was sent off four minutes later for a two-footed lunge on Messi.

Real appeared to have salvaged a point when substitute James Rodriguez converted from close range five minutes from time.

But Messi had the final word with his 16th El Clasico goal in LaLiga matches – a record.

“It was a match between two wonderful teams that gave everything to win and in truth either side could have been victorious,” Enrique said.

“We have defended well throughout the match but we were ready to draw at the end, however that would have been a missed opportunity on our part.”