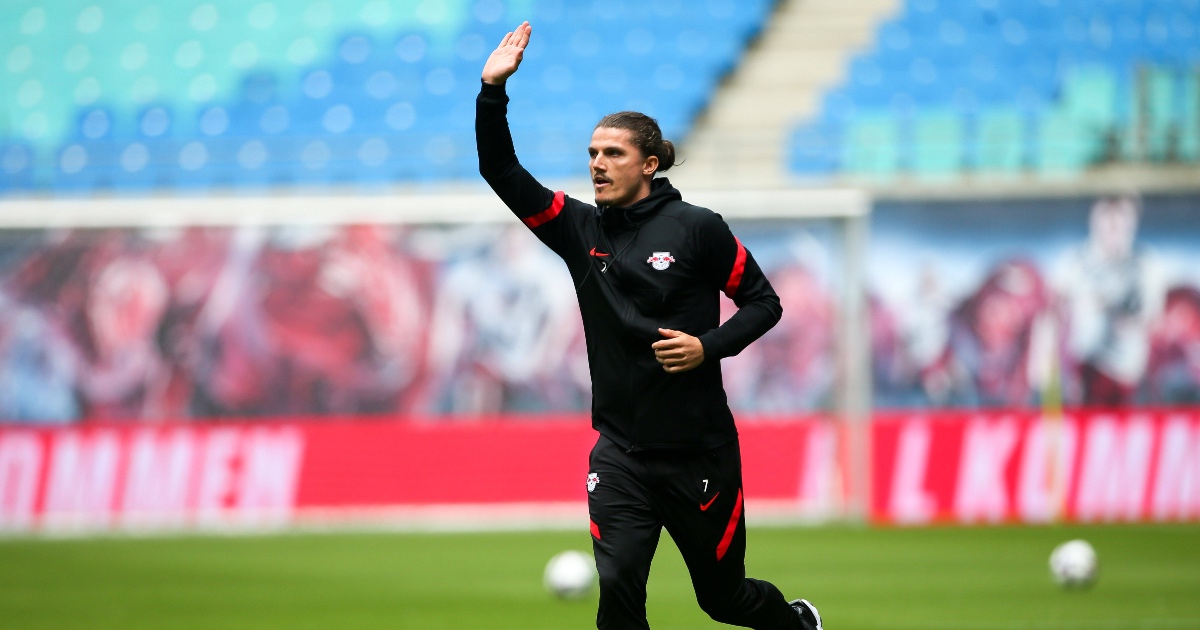 RB Leipzig manager Jesse Marsch says it is ‘enitrely possible’ that club captain Marcel Sabitzer will be on the move this summer.

The central midfielder recently entered the final 12 months of his contract with Leipzig.

He’s been linked with a number of Premier League sides, most notably Tottenham, Liverpool and Manchester United.

When asked about Sabitzer earlier this weekend, Marsch told reporters: “It is entirely possible that Sabi leaves.

“He only has one year of [his] contract left – let’s see what happens to him.”

The 27-year-old has been an important part of Leipzig’s rise in German football.

He joined in July 2014 and spent the following season on loan at their sister club, Red Bull Salzburg.

Since returning he’s made 227 appearances, scoring 52 goals, and helped them to gain promotion from Bundesliga 2.

Sabitzer sparked transfer rumours in April by saying he ‘can imagine’ playing in the Premier League in the near future.

The player emerged as a transfer target for Spurs last year. They were searching for a new midfielder to replace Dele Alli, although the Englishman eventually opted to remain in north London.

That was during the days of Jose Mourinho, and it’s unclear whether Nuno Espirito Santo maintains an interest in Sabitzer.

Spurs have signed three players so far this summer. Bryan Gil joined from Sevilla on July 26, with Erik Lamela going in the opposite direction.

Director of football Fabio Paratici has scouted Italy extensively and decided to bring in Pierluigi Gollini and Cristian Romero from Atalanta.

The club’s main aim will be to keep hold of Harry Kane. The striker is hoping to leave in search of trophies but interested clubs are being put off by his huge asking price.

Speaking about the England captain earlier on Sunday, Nuno said: “It’s true – Harry is with us. He has to quarantine. He is in (Spurs) Lodge but he is training. Already made the first day with the sports scientists.

“We expect to integrate Harry when he follows all the protocols that we have to apply.

“We have processes and we have to be very strict and not take any chances as one of the things, as everyone has learned, is the pandemic is still here so we have to be really careful.