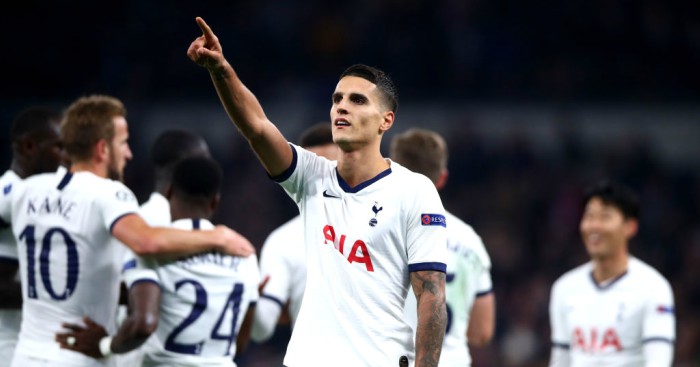 Jose Mourinho continues to play all the hits at Tottenham, with reports that to be honest we really should have seen coming suggesting he’s once again dead keen on signing Ivan Perisic.

Of course he is. And it’s not even as far-fetched as it might seem. Bayern Munich aren’t apparently all that fussed about making his loan move permanent, and Inter appear seem to get rid. Enter Jose with Daniel Levy’s moth-stuffed chequebook. Nothing that can possibly go wrong there.

Some reports, though, also suggest that Inter might be interested in bringing a Tottenham player or two the other way. Specifically, the shithouse’s shithouse himself Erik Lamela.

That would be a shame. Firstly because it would finally bring the final curtain down on the “Magnificent” Seven that Tottenham spent/spunked all their Gareth Bale winnings on. Despite his early struggles, Lamela comfortably outlasted your Chiricheses and your Paulinhos, saw off the Nacer Chadlis of this world and was still at White Hart Lane long after Roberto Soldado and Etienne Capoue had been cleared out.

With Christian Eriksen now himself at Inter, only Lamela remains. And he’s been worth every penny of the £30m Tottenham dropped on him, as long as you appreciate him for the beautiful bastard that he is and not the footballer people sometimes expect him to be.

But those who see him for what he is appreciate that he absolutely does a job and does it gloriously. He famously ‘set the tempo of the press’ under Mauricio Pochettino, and it was the collapse of Tottenham’s high pressing game as much as anything else that did for the manager. He scores his share of goals – including what was in hindsight a misleadingly ridiculous and scandalously under-rated 20-yard Rabona nonsense in what remains to this day the single greatest football match ever played, also featuring as it did Harry Kane scoring a hat-trick and then going in goal.

Mainly, though, Lamela kicks and elbows and fouls and swears and niggles the shit out of the opposition. He was, inevitably, front and centre at the infamous Battle of the Bridge.

He should, in short, be a Mourinho favourite. He still has the skills to be an effective member of an often dreary attack but he is guaranteed to be, in the nicest possible way and to use Mourinho’s own word, a c***.

Fellow Battle of the Bridge hero Eric Dier has, inevitably, become cast as Mourinho’s adopted son, forgiven for his errors, be they standing still in the six-yard box against Sheffield United or trying to have a fight with Norwich fans in the long lost days before the social distancing aspect of such an endeavour was even a consideration.

For Dier, who gets Mourinho just as utterly as Mourinho gets him, a lovely new contract.

For Lamela, alas, it seems his fate could be as a makeweight.

Lamela has completed 90 minutes in the Premier League just twice under Mourinho, having been out of action with a hamstring injury when the Portuguese took over. Both of those full 90-minute stints came in drab goalless draws at teams who went on to be relegated so maybe that’s not the best way to use him anyway.

Most of his appearances have been brief hatchet jobs off the bench. Fifteen minutes here, one minute of shithousing to close out a north London derby there. He was involved in the first eight of Tottenham’s nine Project Restart games, but only for a combined 353 minutes. He registered neither a goal nor an assist in that time, not that this matters: Lamela’s game exists on a plane way above such drudgery.

He didn’t even make it off the bench in a situation that looked made for him as Tottenham grimly held on to a 1-1 draw at Crystal Palace to scrape a Europa League place.

We must accept that we may have seen him run 50 yards to commit a needless 88th-minute foul and start a row with three opponents for the final time in the Premier League. It may be that we will never again see Lamela dig a sly elbow into an unsuspecting 21-year-old’s ribcage on the halfway line for no real good reason other than he could.

The last of the seven could be departing the scene. He was significantly less bad than all of them apart from Eriksen and might only be truly appreciated after he’s gone.