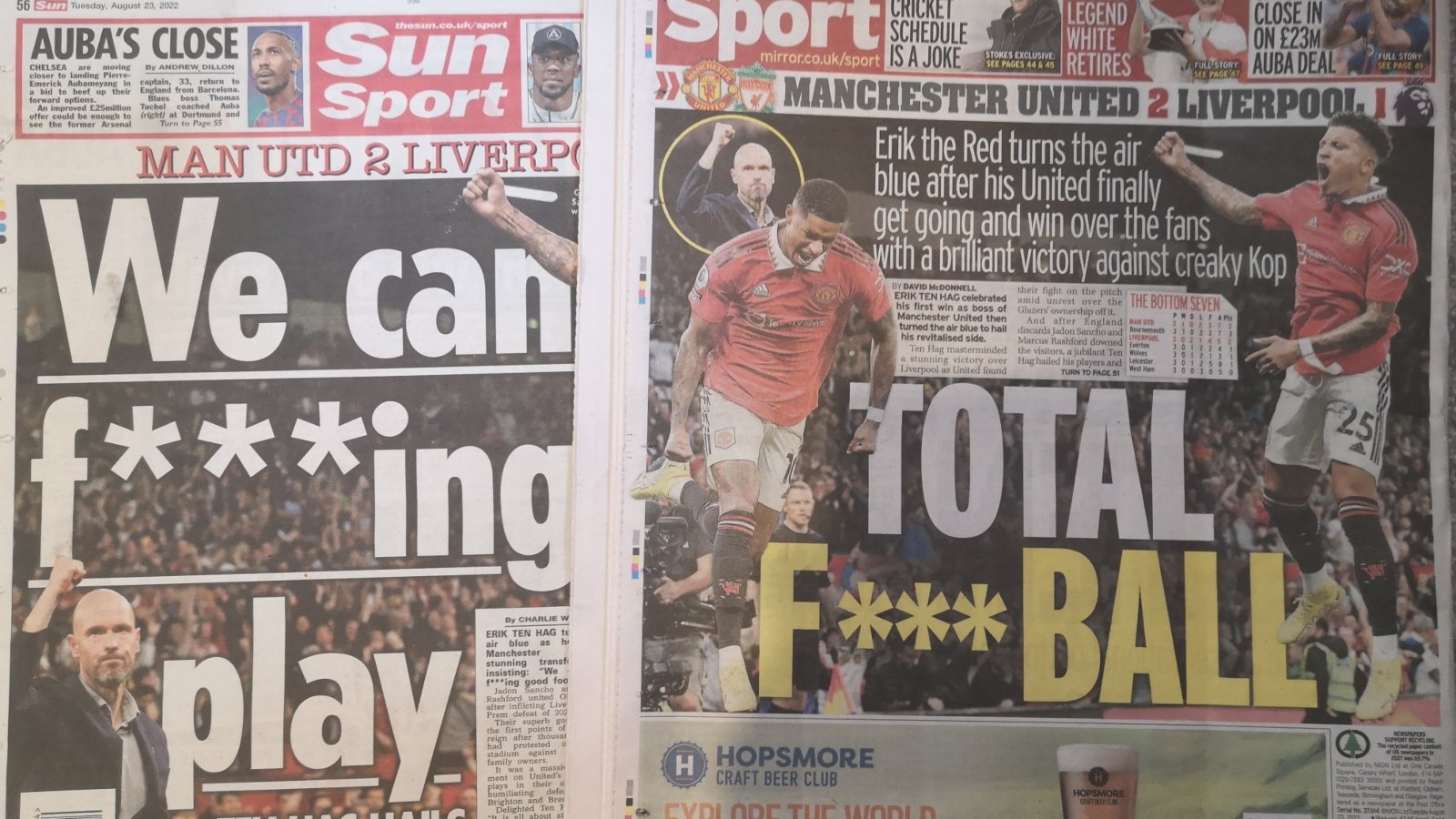 Everybody gets weirdly prudish about swearing but least we now know what game we will be playing on Wednesday night thanks to Erik ten Hag.

X-press
Can we reclaim the phrase ‘X-rated’ from bizarrely prudish tabloids please?

The dictionary definition is ‘pornographic or indecent’. You know what’s not pornographic and indecent? One use of the F word. That wouldn’t even get you a 15 certificate.

‘‘They can f***ing play football’ – Sky Sports apologise after Erik ten Hag’s X-rated interview following Liverpool win’ (The Sun) – it was one fucking swear. Is this now an X-rated Mediawatch?

‘What fuming James Milner scream at Virgil van Dijk in X-rated blast following Man Utd star Sancho’s goal vs Liverpool’ (The Sun) – now unless Milner screams at him to suck his c**k and describes the act in detail then we can guarantee that his ‘blast’ was not X-rated.

(He didn’t. But we are deeply disgusted by The Sun’s grammar.)

Turning the air red
And no, Liverpool Echo, it’s not an ‘X-rated Liverpool message’ as it was neither directed towards Liverpool nor about Liverpool. Some things don’t mean more.

According to Urban Dictionary, it’s ‘a sexual practice where six or more consensual adults get naked and roll around together on the floor indulging in mostly non penetrative sex. As the six bodies pile around each other, the ‘fuckball’ appears to be a single mass of limbs that rolls. Think Twister, without the mat and with erections’.

More, more, more
Where would we be without websites REVEALING things left, right and centre? The MailOnline have their big ‘da-da’ moment on Tuesday morning:

‘REVEALED: Manchester United’s players ran 19km MORE against Liverpool than in the miserable defeat at Brentford – and made 155 sprints last night compared to just 65 in the 4-0 drubbing’

MORE? Does that mean they expected it to be less?

But more importantly, of course they sodding did. They had 66.7% possession at Brentford and less than 30% possession at home to Liverpool. You run more when you don’t have the ball; you’re not comparing like with like.

Also, maybe don’t write ‘the match was more about fight than possession, as United had a much higher success rate than Liverpool in duels’ when the graphic below literally says that the duel success rate was 51.4% v 48.6%. Much higher? That’s marginal at best.

What he said
Over on the Mirror website, the real fun is in pretending somebody has explained something they really haven’t.

From that headline, we would expect to read Jurgen Klopp explaining what he said to Bruno Fernandes after Manchester United beat Liverpool. That seems reasonable.

‘Jurgen Klopp played down the significance of his post-match conversation with Bruno Fernandes after Liverpool were beaten by Manchester United at Old Trafford.’

Let’s read those Klopp quotes in full and see if we can spot at what point he has explained what he said to Bruno Fernandes.

“It was not animated it was the most harmless conversation I ever had with a player, who was obviously as emotional as I was.

“It was the situation with Martinez, who went down under an ‘awful’ tackle that was obviously nothing.

“He [Fernandes] made a bit of it, he was talking to me and saying, ‘you’d do the same’.

“But it was fine after, he told me he needs these kind of conversations. Okay, it’s fine, use me!””

Spotted it yet? Of course you haven’t because it’s not sodding there.

Won’t someone think of the Glazers?
If you are tasked with writing a ‘big-match verdict’ on Manchester United’s victory over Liverpool, where would you start? Maybe with the performances of Lisandro Martinez or Tyrell Malacia in defence? The absence of Harry Maguire and Ronaldo? The unexpected composure and fight of Marcus Rashford? Or perhaps you would write about Liverpool and their many weaknesses?

If the answer to that question is ‘well, I would write about how that’s a good result for the Glazers but it won’t last’, then congratulations, for you are Charlie Wyett of The Sun, you have lovely hair and you were caught off the hoof by the way the match unfolded and decided to stick with your original plans of writing about the protest anyway.

This is literally the opening line:

‘THE Glazer family are certainly not off the hook – Manchester United fans’ hatred towards their owners is just too great.’

Wyett goes on to write that the Glazers ‘will have been relieved that Jadon Sancho and Marcus Rashford bailed them out – for the time being’ and says the anger will disappear ‘until United’s next dodgy run of results’.

But the biggest clue that all this was written before the actual game is the line that ‘Casemiro will make United stronger in central midfield – not that it could get much weaker’. It looked okay against Liverpool, fella. You know, in that game you were supposed to be writing about.

On a night when he could have been pontificating about the brilliance of Manchester United or the vulnerability of Liverpool, this was Wyett’s big verdict:

And no football until 8pm. Which is close to the time that he seemed to stop writing.

You love to see it

Benching @Cristiano for Elanga against Liverpool, even by current abysmal Manchester United standards, is one of the dumbest decisions in football history. Ten Hag should be fired for this alone if they get hammered tonight.. or should I say WHEN they get hammered. pic.twitter.com/7MbA53824C