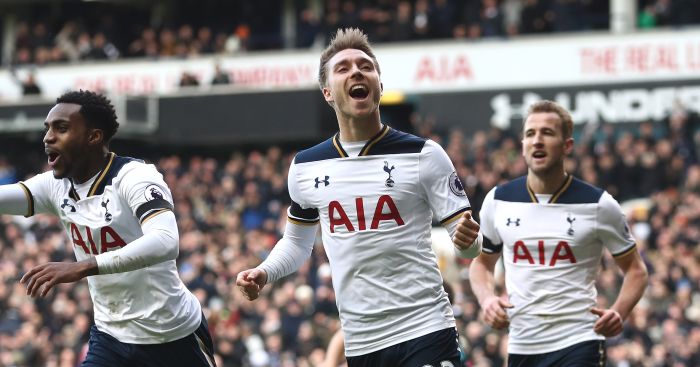 Jan Vertonghen believes Tottenham team-mate Christian Eriksen is now among the best playmakers in the world after the Dane’s sensational start to the season.

Vertonghen knows Eriksen well, having played with the midfielder at Ajax for three years before he moved to Spurs in 2012 and Eriksen followed a year later.

Eriksen has been superb so far this term, contributing three assists and two goals already in the Premier League. He finished last season with 15 assists, second only to Manchester City’s Kevin de Bruyne.

Consistency, rather than talent, has been Eriksen’s issue since joining Spurs in 2013 but Vertonghen insists the 25-year-old has matured.

Asked if Eriksen was up there with the finest playmakers in the world, Vertonghen said: “I believe so, yeah. I think Christian has made unbelievable progress.

“I’ve known him for many years and he’s always been a great talent, a great player but in the last two seasons he’s made great progress.

“Everyone always said that you have to be the best playmaker in the world with his quality and I think definitely the last years have been big, big steps forward.

“He’s scoring goals and giving assists and even when he drops a line, what he did for us in a couple of games, he does very well. Christian, especially in the last two seasons, has been enormous.”

Tottenham face APOEL in the Champions League on Tuesday as they look to build on an impressive opening win at home to Borussia Dortmund in Group H.

According to the best sports betting on openodds.com, Spurs are odds on to make it two wins on the bounce in Europe.

Victory in Cyprus could put Mauricio Pochettino’s men in a strong position to qualify given Dortmund host Real Madrid, but Vertonghen is not available.

The Belgian is serving a one-match ban after receiving two yellow cards against the German side, meaning Eric Dier could drop into the back three or Pochettino may put his faith in 19-year-old summer signing Juan Foyth.

“It’s a shame,” Vertonghen said. “I don’t think I deserved that red card, but if not I’m on a yellow card and I can miss any other game with another yellow.

“I’ve got confidence in the team. I’m suspended now but it’s only one game.”